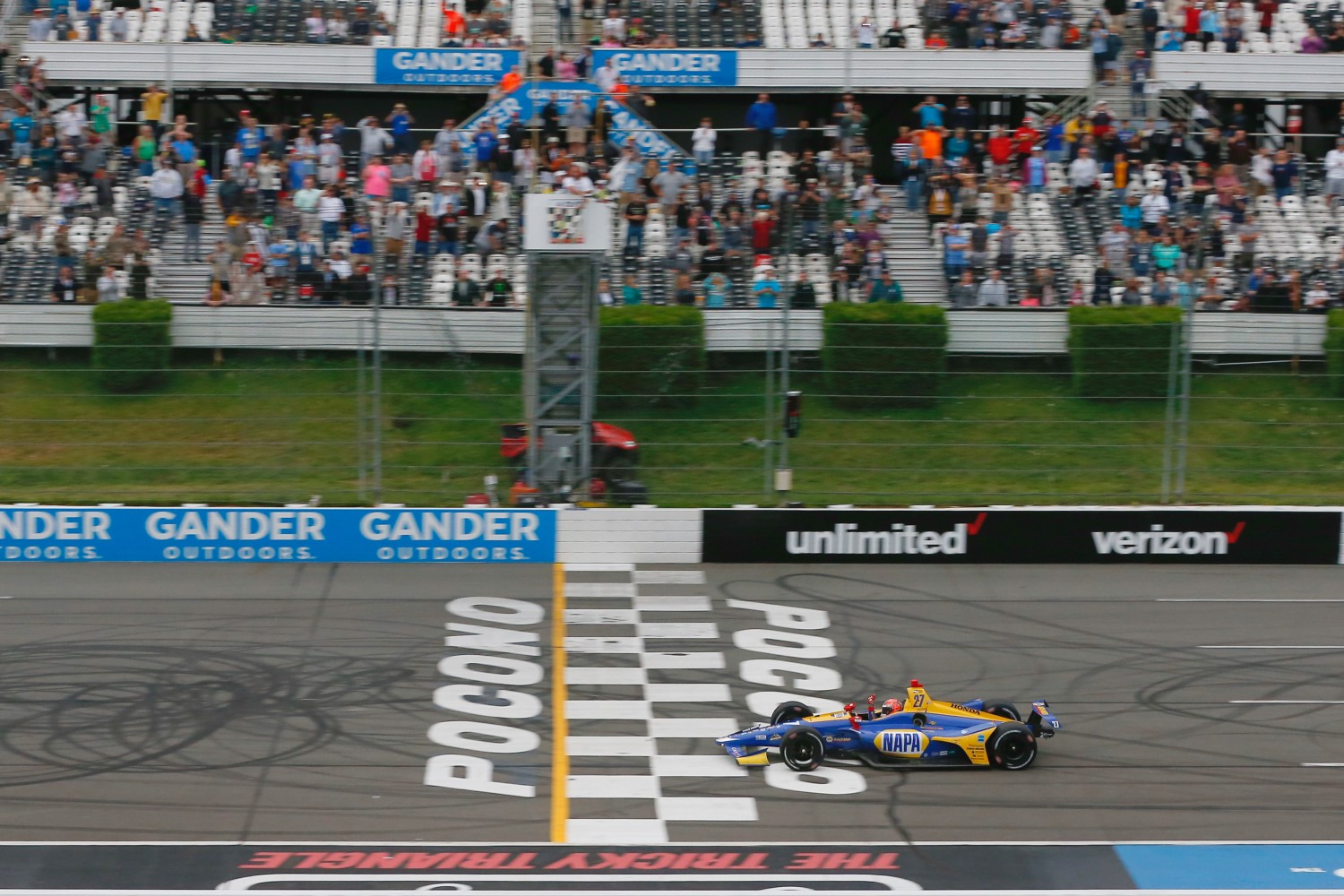 There is a 60 to 70% of Thunderstorms in the afternoon and the best chance of rain is at race time. Since Pocono has no lights, any stoppage to dry the track could mean that darkness sets in and the race gets postponed to Monday. We'll see how the forecast evolves Sunday morning.

To have a shot at winning the NTT IndyCar Series championship, Alexander Rossi feels he needs to win at least one of the four remaining races.

With two wins — at Long Beach and Road America — Rossi is second in the standings, 16 points behind leader Josef Newgarden, who has four wins.

He believes his best chance at another victory is this weekend at Pocono Raceway in the ABC Supply 500.

“You’re not going to win a championship with two (victories)," said Rossi, who is the defending race champion. “So we need to have at least one more win and when we looked at the tracks at the end of the year, this was the circled one for us that we knew was going to be a pretty good opportunity to do that.

“We know we need to execute this weekend to hopefully get us a third win to put us in a lot better position come the end of September."

Last season, Rossi led 180 of 200 laps in the No. 27 Andretti Autosport Honda on his way to the checkered flag.

“Andretti always has really good cars here and 95% of an oval victory is the car, to be honest with you," Rossi said. “As a driver, you can stay on top of the race as it unfolds and do a better job managing that element of it. But ultimately if you have a fast car you’re going to be up at the front regardless of who you are."

Only four cars finished on the lead lap last year and if not for the Robert Wickens crash stoppage, Rossi may have lapped the entire field.

“A lot of the issues we had at Indianapolis earlier in the year were put down to heat-related issues because it was one of the hottest 500s we had in a very long time," Rossi said. “There wasn’t a lot of emphasis put on changing and adapting the car or the tire for this event. We figured once it was cool we’d be fine. And it wasn’t. So I think that’s why track position was everything where this race usually isn’t a track-position race.

“I think Firestone and IndyCar are aware of the deficiencies that they had last year and hopefully it will be different this year for everyone involved."

“The tires and the conditions will be different. Teams improve each year," Rossi said. “We’ve put quite a big effort into the development of the car for this year and this track in particular.

“As always, it’s a big race in terms of deciding the championship ultimately. It’s kind of must-win, must-finish in front of the guys I’m fighting for the championship. Hopefully, we can have continued success here."

Two of Newgarden’s four wins this season have come on ovals (Texas, Iowa). The driver of the No. 2 Team Penske Chevrolet has 504 points to Rossi’s 488.

Simon Pagenaud, this year’s Indianapolis 500 champion, is third in the standings with 457 points. He, too, is looking for his first Pocono win; he has five top-10 finishes in six starts.

Reigning series champion Scott Dixon is fourth with 442 points. Coming off a victory in the most-recent race at Mid-Ohio, Dixon won at Pocono in 2013 and has six top-10 finishes in six starts at the track.