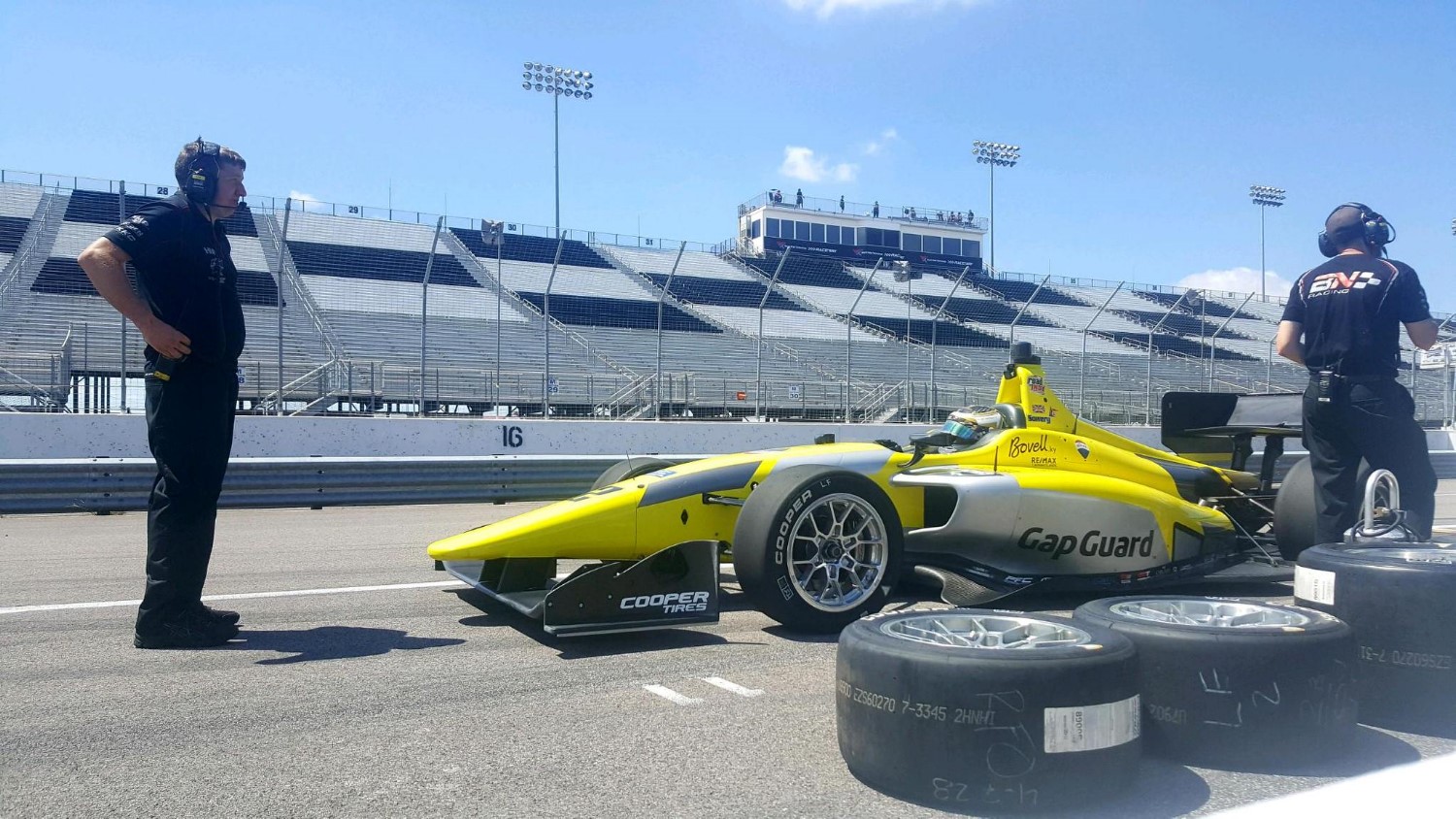 Each series completed a total of three sessions, two of them of 45-minutes’ duration and the final period this afternoon comprising a full one hour of track time. The test represented a rare opportunity to gain some oval testing mileage, and could prove crucial to the outcome of both championships as they reach toward a conclusion.

Some substantial scholarship prizes remain at stake, with only next weekend’s Cooper Tires Oval Challenge of St. Louis and then a pair of road course races apiece at Portland International Raceway, in Portland, Ore., and WeatherTech Raceway Laguna Seca, in Monterey, Calif., remaining on the schedule.

Englishman Sowery Fastest in Indy Lights
Oliver Askew (Andretti Autosport), from Jupiter, Fla., currently holds a healthy 45-point edge over Dutchman Rinus VeeKay (Juncos Racing) heading into the final five races of the season, and while Askew maintained his current streak of form by posting the fastest times in the first two sessions, both men were eclipsed this afternoon by Toby Sowery, from Cambridge, England, who grabbed the headlines by edging HMD Motorsports (formerly BN Racing) teammate David Malukas on his 156th and final lap of the day.Sowery’s last-ditch lap of 28.2865 seconds, an average speed of 159.086 mph, was enough to leapfrog Malukas by a mere 0.0837 of a second.

“We were comfortable right out of the box," said Sowery, who has claimed two podium finishes from the past three races. “Most every track I’ve been to this year has been new, so you can’t let that bother you. Ovals are new to me as well, but in some ways, there’s less to an oval than a road course, and the concept is applicable from one to another. You basically know what to expect, so it’s all about having faith in the car and knowing what it’s capable of. We had a car that allowed us to push fairly easily without taking any risks.

“I’m quietly optimistic going into the race weekend – I don’t want to jinx it, because I really do want that first series win, but I think we’ve got the car under us, it’s just a matter of putting all the pieces together."

For teammate Malukas, 17, from Chicago, Ill., the day represented a welcome rebound following a heavy crash during his previous outing on an oval during the Freedom 100 Presented by Cooper Tires at the Indianapolis Motor Speedway in May. Malukas had continued the team’s dramatic recent improvement by emerging second fastest to Askew in the afternoon session before heading the charts for almost the entire final hour.

“This is the most confident I’ve felt since I started Indy Lights," said Malukas. “I’m still new to ovals, to preparing passes, and I didn’t have a teammate last year in Indy Pro 2000 to work with. I won’t lie, I was a bit nervous getting back into the car, since the last time I was on an oval I had a big incident. I went in not expecting much, but we’ve made a lot of changes to the team and this was a fresh start. I was expecting to take my time getting up to speed, but we were up to pace right away in the first session.

“It’s quite difficult to pass here, as opposed to Indy, so getting practice in passing is really important, and it went really well. We put it in P1 doing a quali sim early in the third session and went back to race runs, since that’s where I struggle the most. We found a really good race setup but we were out of fuel and couldn’t compete with Toby over those last few laps, but congrats to him. All that matters is the team effort – to be one-two at the top, we’re all really happy going into the race weekend."

Robert Megennis, from New York., N.Y., ended the day third fastest for Andretti Autosport. His best lap of 28.4628 was also set in the final session. Teammate Askew did not improve in the final period, although his time of 28.4906, almost a couple of tenths clear of Malukas earlier in the afternoon, remained good enough for fourth overall.

“It was a good day," said Askew. “We were quickest in the first two sessions and then concentrated on longer runs in the final session to get ready for the race. I think we could have been right up there with the other guys but I’m happy with what we learned and we will have a few more things to try on the car when we come back next week."

After scoring his first Indy Lights victory at Gateway in 2018, Andretti Autosport’s Ryan Norman, from Aurora, Ohio, had to be content with fifth on the day, narrowly ahead of Askew’s title rival VeeKay. The top six were all blanketed by less than three-tenths of a second.

The battle for supremacy in Indy Pro 2000 between Rasmus Lindh and Kyle Kirkwood is no closer to being settled following today’s test. Separated by only nine championship points heading into the final five races of the season, the two title protagonists today were within a scant 0.0278 of a second of each other. Series leader Lindh, 18, from Gothenburg, Sweden, headed the charts for most of the day for defending champion team Juncos Racing, only for Kirkwood, 20, from Jupiter, Fla., to snatch away the bragging rights for RP Motorsport USA in the closing minutes by turning a lap of 31.6365 seconds, an average speed of 142.241 mph. Kirkwood’s lap was significantly faster than the lap of 32.0991 seconds which was enough for RP’s Harrison Scott to claim the pole position one year ago.

“We had some issues in the first session but we went back to the team’s baseline from last year’s pole-winning car in the second session," related Kirkwood. “In the third session, we put fresh tires on and were able to get a quick lap there at the end, though I think there’s plenty of room for improvement. The team has confidence coming into the race weekend after their performance here last year, and since this is the second oval of the year.

“This is very different from Lucas Oil Raceway, as there are fewer reference points and you’re not running up high the entire time, and we’re going a lot quicker. This is the first time I’ve been on a ‘real’ oval so it was a good experience. I think we’ll be strong next weekend."

Lindh also had good cause for optimism after topping the charts in the first two sessions. His team, Juncos Racing, has won at Gateway in each of the past two years, with Victor Franzoni claiming top honors – and the championship – in 2017, and Rinus VeeKay mirroring that feat in 2018.

“This is my first time on an oval like this and it was a good experience," said Lindh. “You can work more with your driving here because you can run more of a normal line in the middle of the corner, rather than having to run a high line. It took a few laps to get used to it. It’s more difficult to find time on an oval like this, but if you’re in the top three, running here feels quite easy.

“Rinus did well here last year and we were P1 in the first two sessions so we’re very confident that we have a good baseline going into the race weekend. We focused on race runs in the final session and we’re very happy with the car. We have to be careful, as Kyle is catching us a bit, but I feel as though this will be a good race weekend for us."