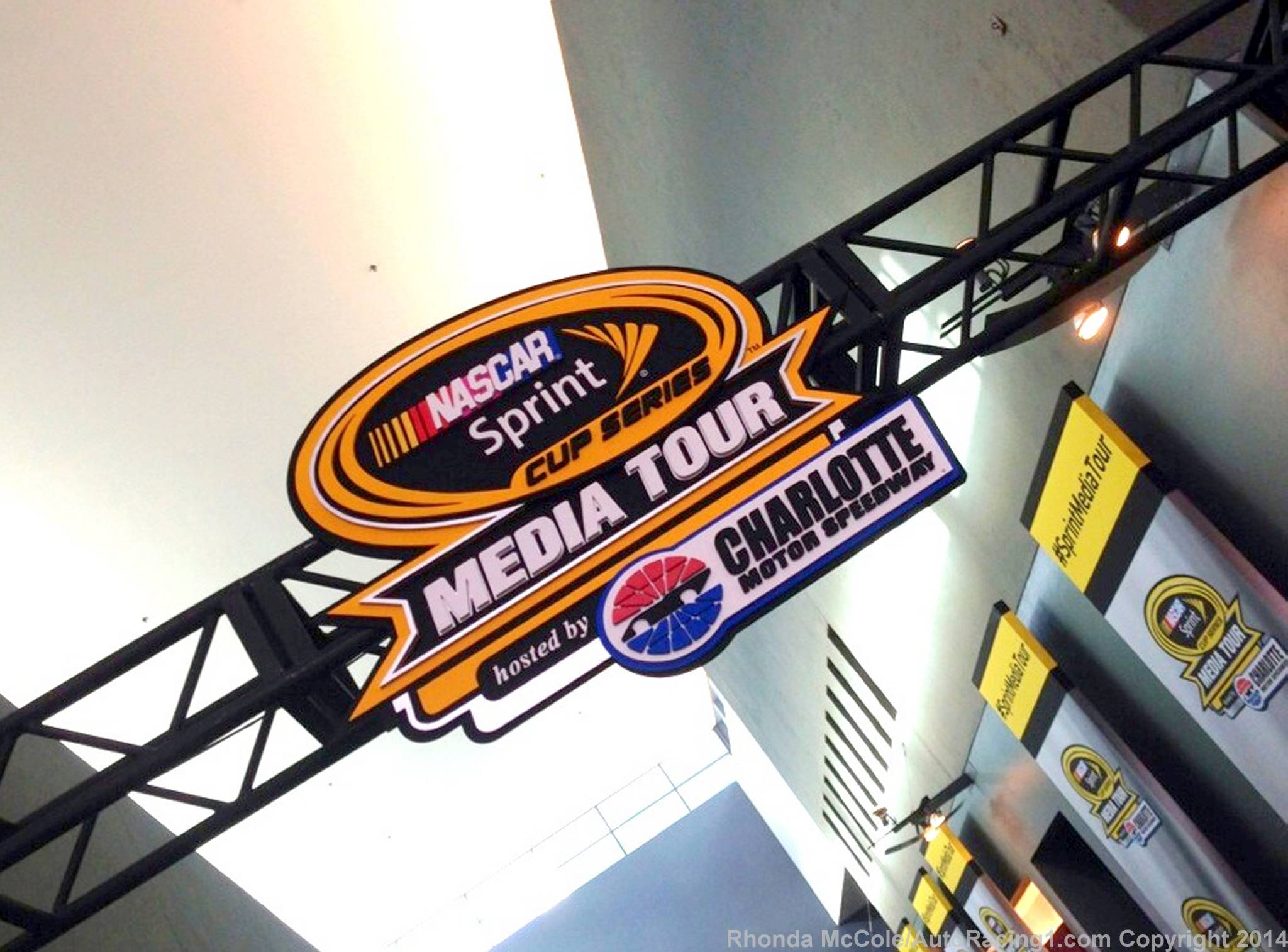 The 32nd annual NASCAR Sprint Media Tour hosted by Charlotte Motor Speedway kicked off Monday at the NASCAR Hall of Fame in Charlotte, NC, bringing together motorsports journalist from around the world to the heart of NASCAR country as the countdown begins to the start of the 2014 season.

One of the first events of the four-day tour was a visit from Stewart-Haas Racing, who mark another milestone in their team’s history as they expand to four cars for the 2014 season, adding driver Kurt Busch to their lineup, joining team co-owner Tony Stewart, Danica Patrick and Kevin Harvick.

After a disappointing season that saw Stewart miss the final three months of the season after suffering a broken leg in a sprint car crash on Aug. 5, Stewart will finally make his long-awaited return to the drivers seat in the season-opening Sprint Unlimited on Feb. 15.

After a lengthy rehabilitation, Stewart’s leg is still not quite 100%, but he’s still determined to work through the pain to get back in the car.

“It just keeps getting better and better each week," said Stewart. “There are days I feel better than others; and then there are some days that I can’t explain that I don’t feel as good. I got a great therapist here in Charlotte. He’s working me out hard, not making it easy by any means, but it’s not supposed to be easy. It’s supposed to be difficult, it’s supposed to be challenging, but I’m really, really happy with the progress.

“I feel like it, and he feels like that we’re over the hard part – over the hump – and that doesn’t mean the intensity level goes down with the therapy and the work we do, but at the same time, we’re making great progress. We’ll judge it Sunday to Sunday."

After starting out of the gate strong in 2013 winning the pole for the Daytona 500 becoming the first woman to lead a lap in the event, there weren’t too many other bright spots in Danica Patrick’s season, where she collected only one top-10 finish, ending the year 27th in points and losing out on Rookie of the Year honors to boyfriend Ricky Stenhouse, Jr.

With the departure of Ryan Newman, Patrick is now the second-longest tenured driver at SHR, and with Harvick and Busch now in the lineup, she’s eager to contribute and get feedback from her new teammates.

“I almost feel like a rookie again because I have all of these guys I can learn from," said Patrick. “Tony (Stewart) was only in the car for half the year, and with Kurt (Busch) and Kevin (Harvick) being new and then wanting to help me so much, I’m in a good spot."

Following 13 years driving for Richard Childress, Harvick departed the team he began his career with, having been tapped to fill the seat left by the late Dale Earnhardt following the 2001 Daytona 500.

Harvick and Childress enjoyed a sometimes turbulent working relationship, but ultimately Harvick chose not to play second-fiddle to Childress’ grandchildren – Austin and Ty Dillon – who were expected to become the heir-apparent at RCR. Following an on-track altercation with Ty during a truck race at Martinsville last October, Harvick referred to Childress’ grandsons as “rich kids" who have had “everything fed to them with a spoon."

Despite a lame-duck season, Harvick brought home four wins in his final run with RCR, finishing third in the series standings.

“It had been 10 or 12 years and we hadn’t won a championship (at RCR)…one thing after another kept getting evaluated and I didn’t feel like we were making any progress on getting any closer (to a championship)," said Harvick. “I felt like with Tony (Stewart) and Gene (Haas) and the commitment that they made, and to have already won a championship and having the alliance with Hendrick Motorsports was something felt was intriguing to go try and win a championship."

For 2014, SHR will expand to four full-time teams with the addition of 2004 Sprint Cup Champion Kurt Busch in the no. 41 car.

The creation of a fourth team came somewhat unexpectedly, with team owner Gene Haas pulling the trigger on signing Busch in August of last year, funding the team largely through his own company.

Busch’s signing with SHR marks the biggest step in his return to prominence in the Sprint Cup Series. After losing his ride at Penske Racing following the 2011 season and stints at Phoenix Racing and Furniture Row Racing, Busch developed a reputation for his ill temper, in-race radio tirades and off-track altercations that earned him a least one suspension and potentially damaged his career.

During last year’s media tour, Busch called his ride with Furniture Row Racing a stepping stone to getting his career back on track. Now, with Stewart-Haas, he believes he’s back where he wants to be

“Gene Haas and this team have been in this for over a decade, then Tony came on board in 2009 and made that championship run in 2011 and delivered. That’s the type of progress you want to see with a team," said Busch. “It’s the final type of spot you want to find yourself in to be competitive, win races on a weekly basis and to be in position….to have a shot at a championship."

Adding a driver with a reputation such as Busch’s to a lineup already full to the brim with egos and short tempers has raised more than a few eyebrows, leading some to wonder how this mix of volatile personalities will get along as the season progresses

“What everybody is overlooking is the fact we got four alpha drivers here that have alpha personalities, the great thing is we all have the advantage of understanding each other and having similar personalities like this," said Stewart. “I think what everybody’s first thought is the opposite of what the reality of it is. We’re a great support system for each other…that’s what teams are about is support. What you might see as a great opportunity to be a disaster, we look at it as an opportunity to be a huge positive and a great match for four drivers to work together.

“I know why everyone thinks the way they’re thinking, but I see it from a different perspective. I believe it’s going to be a lot different from what everyone thinks, because I’m seeing it firsthand."

Now entering their seventh year in Sprint Cup, JTG Daugherty Racing will switch from Toyota to Chevrolet for the 2014 season while forging a technical alliance with Richard Childress Racing, Looking to duplicate the success of Furniture Row Racing found in their own partnership with RCR.

“The last several seasons we were trying to figure out the best way to improve our race team. We didn’t have the success and everything that we wanted, but within our four walls we feel that we’re a top-20 race team not a 30th-place race team like we were last year," said Brad Daugherty, who co-owns the team along with Tad and Jodi Geschickter. “We looked at the best fit for us and Richard Childress gave us that."

The team adds driver A.J. Allmendinger behind the wheel of the no. 47 Chevrolet, who finally is back in a full-time ride since his 2012 suspension for violating NASCAR’s substance abuse policy.

Leavine Family Racing returns for their fourth season in the Cup Series in 2014, bringing in Michael McDowell as driver of the no. 95 Ford.