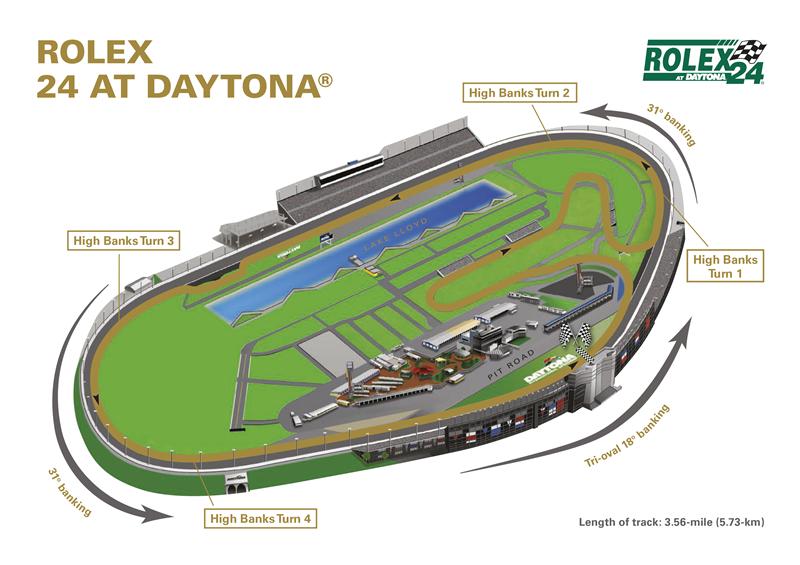 Just over 8 hours remain before the first major race of the 2014 endurance motor-racing season, the 52nd edition of the Rolex 24 At Daytona, which starts at 1410 EST, Saturday, 25 January. With a line up of 67 cars, this icon of motorsport is as popular as ever and once again set to raise the heartbeat of drivers, pit-crew and fans.

The past few days have seen the usual frenetic activity as teams seek to make best use of the remaining hours to finalize the preparation of equipment, personnel and strategy.

Today sees a final practice session as tension continues to build. Greg Jones, Team Manager for SRT Motorsports is in understandably good spirits: “Qualifying for all classes was really tight, really competitive. As a competitor that’s the best you can ask for. As a team, we had a really good day with a pole and a third in GTLM, and a fifth in GTD".

Weather is key component in setting up the cars, and while it is unseasonably cold in Florida this year the race is expected to be dry with only a small chance of some rain showers. Greg Jones again: “It has been really cold, but on race day temperatures should be in the 60s. If gets really cold we’ll have to tape or block off some the cooling engine and differential openings, and then be ready to remove that particularly in the morning as it warms up."

Elton Sawyer, Director of Operations for Action Express Racing the overall winners in 2010, looked back on a successful preparation: “We’ve run over 2,500 miles of testing. The cars are qualified on the second row. The weather is always something you have to deal with, and while there are lots of things we can control that is not one of them. The number one challenge this year is likely to be traffic. Our drivers are going to have to be on their toes. Situation awareness is going to be really important even for both drivers and the pit crews."

Prototype (P) – #99 GAINSCO/Bob Stallings Racing secured pole position and will lead the entire field off the start line after Alex Gurney posted a lap time of 1:38.270 (at an average speed of 130.416 mph). #90 Spirit of Daytona qualified second just two-tenths of a second slower.

GT Le Mans (GTLM) – the #91 Viper GTS-R of SRT Motorsports held off the competition lapping in 1:44.506. Driver Marc Goosens put the achievement in context shortly afterwards: “Having pole is not the most important thing for a 24- hour race, but it helps. It boosts the confidence for the whole team and it’s a good starting point."

GT Daytona (GTD) – the 29 car class is expected to provide some of the best competition over the course of the Rolex 24 Hour At Daytona. Qualifying confirmed the prospect with the first three separated by less than one-tenth of a second. The #48 Audi R8 LMS of Paul Miller Racing came out on top in 1:46.973.

Who’s going to win? That question will only be answered when the Rolex timing marks 14:10 EST on Sunday.

The 52nd Rolex 24 At Daytona starts at 14:10 EST on Saturday, 25 January 2014. The winners will be presented with the coveted Rolex timepiece at the conclusion of racing on Sunday, 26 January 2014.

A partner of track racing in Daytona Beach from its beginnings in the late 1950s, Rolex has been Title Sponsor of this motor-sport legend since 1992. The Rolex 24 At Daytona celebrated its 50th anniversary in 2012 – just one year ahead of the Cosmograph Daytona, the Rolex chronograph dedicated to racing drivers. On its launch in 1963, the watch brand baptized its new model “Cosmograph Daytona" to mark the connection with the Daytona International Speedway, the fastest American track of its era.