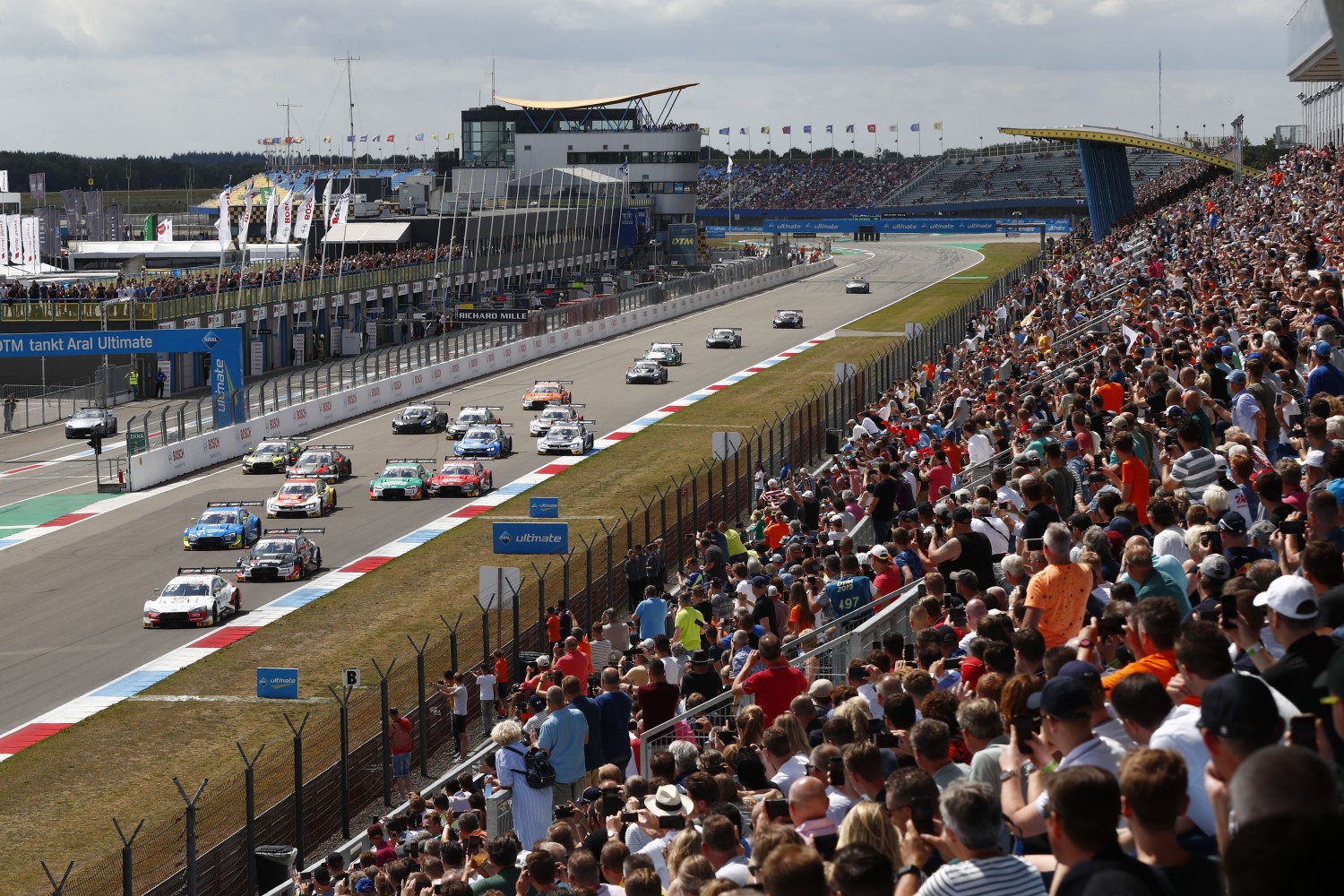 The DTM at 500: on Sunday, 25 August, Europe’s most popular touring car series celebrates the 500th race in its history.

That landmark makes DTM one of the world’s longest running race series, having so far completed 498 races across 342 event weekends since making its debut in 1984.

Next weekend’s event at the Lausitzring (23-25 August), includes the usual two races – one each on Saturday and Sunday (start at 13.30 hrs on each day), with Sunday’s race the landmark 500th.

The milestone’s venue is suitably appropriate: the Lausitzring’s owner is the internationally leading expertise organization DEKRA, which itself celebrates its own unique achievement with DTM this year: 30 years of partnership.

Germany’s eastern-most race track has been a regular venue on the DTM calendar for 20 years, beginning in 2000, and with 23 races held at the track.

From Zolder to Fuji

In 35 years, DTM has become a brand renowned across the world. What started as the ‘Deutsche Produktionswagen-Meisterschaft’ in 1984 has become an internationally recognized race series with events held across, Germany, Europe and – imminently – in Asia, when Japan’s Fuji Speedway will host the ‘Dream Race’ between cars from the SUPER-GT series and the DTM, on 23 and 24 November.

‘Feel the roar,’ is the DTM’s motto. However, the DTM is much more than ‘just’ motorsport. Nowadays, the race weekends also provide a varied support program with a family-friendly festival-like atmosphere including autograph sessions with the stars, live concerts and the opportunity to look behind the scenes of the DTM.

The DTM is broadcast live in 30 countries and can be watched around the rest of the world via the official live-streams at DTM.com, on YouTube and the mobile DTM app.

The DTM’s success story started well before the digital age, on 11 March 1984 at Circuit Zolder with victory for Harald Grohs (GER) in a BMW 635 CSi.

Some interesting facts and figures from (almost) 500 DTM races:

For the record: the 498 races so far include all 36 races of the ITC from 1995 and 1996, the years in which the DTM was sanctioned by motorsport’s global governing body FIA under the ‘International Touring Car Series’ and ‘International Touring Car Championship’ banner, the 10 races of the ITR Gold Cup (1991, 1993, 1994), the DTM invitation race in Shanghai in 2004 as well as the three races in Salzburg (1988) and Berlin (1995) that were started, but remained without classification after being halted. The races at the Lausitzring in 2000 that were eventually cancelled due to heavy rain, on the other hand, haven’t been counted, and neither have the DTM events at Munich’s Olympic stadium (2011, 2012).

Quotes prior to the 500th race

“500 races is a truly impressive milestone in the success story that is the DTM. As ITR chairman, that we are able to celebrate this special occasion at the Lausitzring makes me particularly proud. In 35 years, the DTM has developed itself into one of the world’s most popular and most spectacular race series, also thanks to the very good work achieved my predecessors within ITR and the resourceful support from the manufacturers and our partners. Particular thanks go out to founder Hans Werner Aufrecht for his many years of relentless commitment and efforts for the benefit of the series. Obviously, there have been highs and lows, but the fans have always remained hugely loyal. For us, their passion and loyalty is an obligation and a boost to continue the development of the DTM for the future to ensure that we, all of us together, will be able to add to this success story for a long time to come."
Gerhard Berger, Chairman ITR e. V.

“For me, it is great that the 500th race has been reached. In the years in which I raced, it was often said that it would be the last year of the DTM. Therefore, I am even more delighted that the DTM is celebrating its 500th race and that the series is in a better position than ever. I thoroughly enjoy watching the races. I am really proud of having contributed to part of the DTM’s history; especially now, a little bit further down the line. It has already been 11 years since I was last involved. I’m surprised by how deeply committed to the DTM I was, and how much I’ve achieved. Every now and then, I sit on the sofa with my young daughter to watch old races. Then we both have tears in our eyes: she’s sad that I’m no longer racing; for me, all those great old moments are brought vividly back to life once again."
Bernd Schneider, five-time DTM champion

“In all honesty, the first who comes to mind is Hans Werner Aufrecht. He is the father of the DTM and saved the series several times over the years. After the collapse at the end of 1996, Aufrecht resurrected the DTM in 2000. Back then, he also reactivated me and asked me whether I would support the reconstruction as one of the crowd pleasers. I ended up third in the championship at the age of 50 – something you don’t take for granted. Since then, the DTM has had 18 years with great, great races and many spectators. For me, Aufrecht is the man of the DTM if ever there were one. Looking back at my spell in the DTM sparks a lot of joy and also a certain sense of pride. There were many great people I met and with whom I was allowed to work. All in all, those days went by way too quickly."
Klaus Ludwig, three-time DTM champion