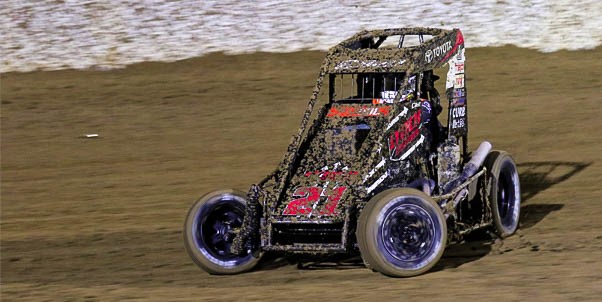 NASCAR standouts Kyle Larson and Christopher Bell are returning to their short-track roots Sept. 4-5 at The Dirt Track at IMS, as both were assigned to cars on the growing entry list for the Driven2SaveLives BC39 Powered by NOS Energy Drink USAC National Midget race.

Larson, who drives for Chip Ganassi Racing in the Cup Series, will make his BC39 debut in the No. 97 car. His USAC career has included a sweep of the 4-Crown Nationals in 2011 at Eldora Speedway and victories in the Turkey Night Grand Prix in 2012 and 2016.

Bell, who drives for Joe Gibbs Racing in the Xfinity Series, will be behind the wheel of the No. 21 car for the second consecutive year in the BC39. He finished fifth in the feature last year in the inaugural event. 2017 NASCAR Gander Outdoors Truck Series champion Bell won the 2013 USAC National Midget title and is a three-time winner of the Turkey Night Grand Prix and Chili Bowl midget races.

Oklahoma native Bell is one of five USAC National Midget champions to be added to the field for the BC39 in this entry update, along with Jerry Coons Jr., Dave Darland, Logan Seavey and Tanner Thorson. Larson, Bell, Seavey and Thorson are part of an eight-car stable from Keith Kunz Motorsports/Curb-Agajanian entered in the race.

Two-time series champs Coons and Darland are part of a star-studded Petry Motorsports lineup that also features Kevin Thomas Jr., who led a race-high 30 of 39 laps and finished third in the BC39 main event last year.

Wise, 16, from Angola, Indiana, runs fourth in the standings with two recent victories during Pennsylvania Midget Week. He won the Stoops Pursuit race on opening night of last year's BC39. Layser is dominating the Midget rookie points this season.

Tickets for the Driven2SaveLives BC39 Powered by NOS Energy Drink are on sale at www.ims.com, along with tickets for the Big Machine Vodka 400 at the Brickyard Powered by Florida Georgia Line on Sunday, Sept. 8 and the Indiana 250 and FGL Fest on Saturday, Sept. 7.

On-track action begins Wednesday, Sept. 4 at the quarter-mile Dirt Track at IMS. Public gates open at 3 p.m., with cars on track for practice at 4 p.m., followed by opening ceremonies at 7 p.m. Heat races and the Stoops Pursuit race will conclude the night's racing action.

Public gates will open at 3 p.m. Thursday, Sept. 5 for the second and final night of action. Cars will be on track for practice at 4 p.m., with qualifying races at 5 p.m. Opening ceremonies are scheduled for 7:30 p.m. and followed by the main feature events, starting with multiple D-Mains and C-Mains, the semi-feature and the 39-lap main event.