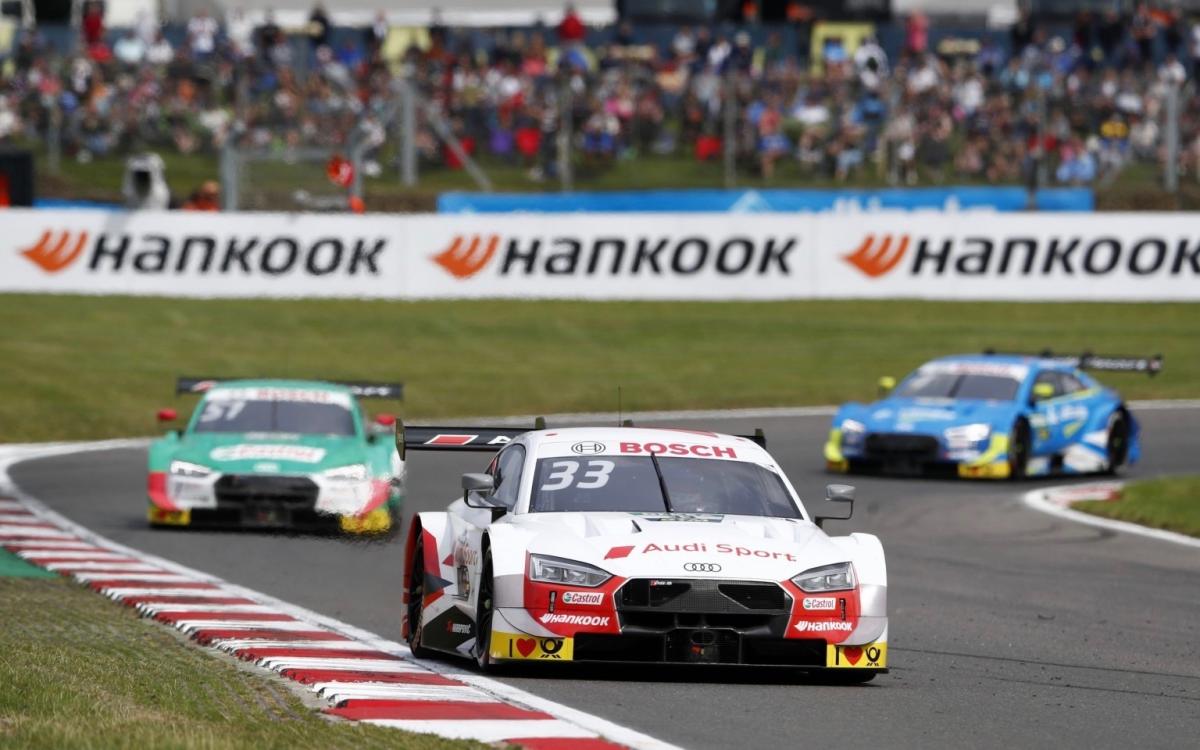 Rene Rast (GER) took a huge step towards the 2019 DTM title after dominating Sun-day’s race at Brands Hatch. The German, who went into the British weekend leading the champion-ship, further consolidated his points tally with a maximum score of 28 (25 for the win; 3 for pole) on Sunday.

Rast was able to control the pace, finishing narrowly ahead of closest championship rival Nico Muller following a duel that went all the way to the final lap.

Yesterday’s victor, BMW’s Marco Wittmann struggled: following a disappointing qualifying session, he made a strategic gamble on a two-stop strategy in the race, but could only finish 10th, the second of the BMWs, behind fifth-placed Philipp Eng.

In the battle for the DTM drivers’ title, Rast has increased his margin over Muller; he has 206 points, ahead of the Swiss driver’s 169. After 12 of 18 races, Wittmann has scored 147 points.

Rast’s fourth win of the 2019 season was – surprisingly – his first achieved from pole position. Second-placed Muller was closely followed home by Robin Frijns (NED), who returned to the podium for the first time since the Hockenheim opener. The Dutchman finished ahead of Loic Duval (FRA) and Philipp Eng (AUT). The BMW driver had started from ninth place on the grid, opted to make a late switch to fresh rubber, and gradually worked his way up to fifth. In a highly spectacular duel over many laps, he was unable to find a way past Duval’s Audi.

With Daniel Juncadella (ESP) and Jake Dennis (GBR) in eighth and ninth places respectively, R-Motorsport/Aston Martin earned a double point-score in its home round on British soil. It concluded a bittersweet weekend for the brand: Di Resta had led on Saturday before earning a time-penalty and, ultimately, retirement. Fellow Brit Dennis also had a shortlived race after being driven into at the start. Juncadella had already scored one point after finishing 10th on Saturday.

“The race weekend has shown that we have taken a significant step forward with the DTM in the UK. Last year, our impact wasn’t that strong; but now it looks like we’re having an effect on the British fans. The spectator interest, the atmosphere, the support program: the event was positive throughout.

“On the sporting side, once again we’ve seen one victory each for BMW and Audi, while newcomers Aston Martin have shown on Saturday in particular that they have made another step towards the frontrunners. On Sunday, Audi was dominant. To keep the battle for the title exciting, BMW drivers Wittmann and Eng need to score a lot of points at the Lausitzring…" Gerhard Berger, chairman ITR e.V.

“I am mega happy! I extended my points’ lead, perfect! My last win was already five races ago, so therefore I’m really happy. At the end, my tires hardly worked anymore although I had tried to man-age them. The race was a mega battle." Rene Rast, winner

“Had I been considerably faster, I would have used the chance to overtake Rene. Too bad that we lost valuable time during the pit stop today. After that, I had to close the gap to Rene again and use my speed advantage to do so. As a result, I wasn’t really able to attack at the end. Of course, you want to try, but when the risk is too big, you’d rather let it be. We’re happy with second place." Nico Muller, second place

“I’m happy to be on the podium. A good end to a good weekend. Yesterday, we were still having minor problems, but we still secured fourth place. Today we came third. A solid result. Now, I’m looking forward to the upcoming races." Robin Frijns, third place