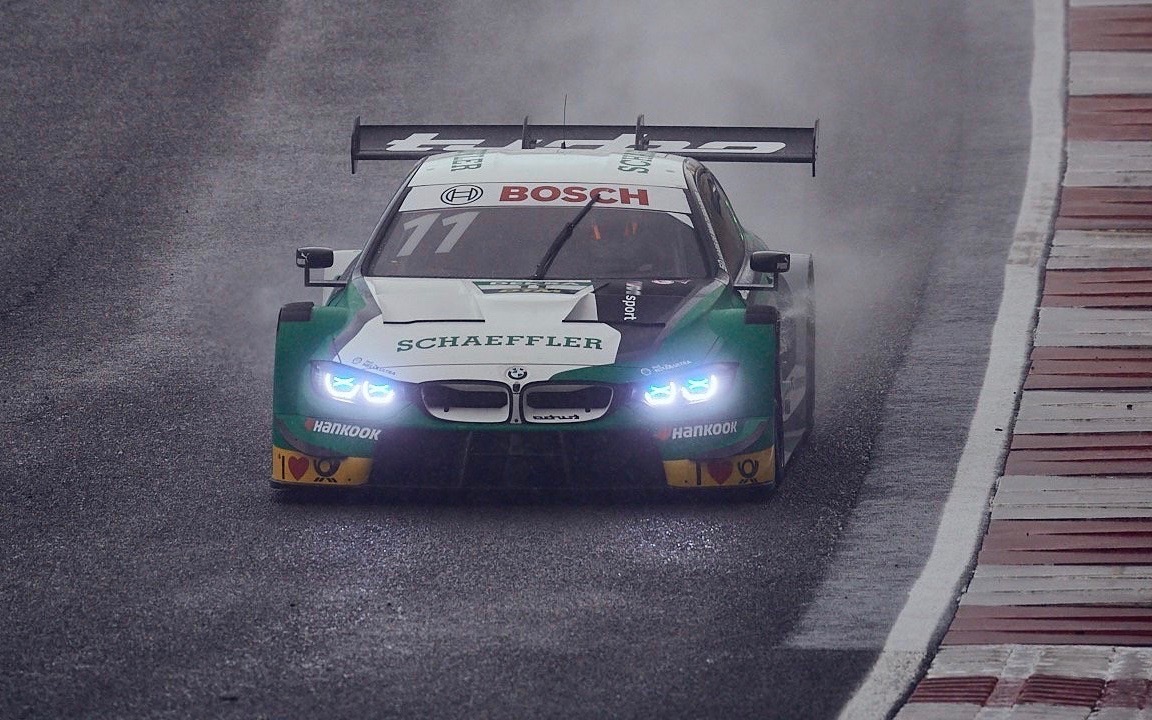 At a drying Brands Hatch Grand Prix circuit, BMW driver Marco Wittmann claimed a sensational last-minute pole position for the first of two DTM races at Brands Hatch. The German set a best time of 1m15.654s in his BMW M4 DTM as the whole field capitalized on a damp-but-drying track to switch from wet-weather to slick tires for the session’s fastest times.

For Wittmann, it was his fourth pole of the season and the 14th of his DTM career. “In these mixed conditions, it was definitely one of the most difficult qualifying sessions we’ve had in a long time," said Wittmann. “Initially, it was wet, but somewhere between rain tires and slicks: it was never clear what the right choice would be. But, as the track dried out more and more, it was clear that slicks were the tires to have. Then, it was just a matter of getting the lap-time in. Luckily, it worked out in the end."

The leader in the driver’ standings, Audi’s Rene Rast, was the first driver to post a sub-1m16s lap time and looked set for pole position with three minutes remaining, until Wittmann went even faster, just 10 seconds before the checkered flag fell.

Despite missing out, Rast was happy with his performance. “Definitely a tricky one," the German reported. “We started on rain tires, then changed to slicks. I am happy with the two points for the championship. With one of my main rivals, Marco Wittmann, right next to me, it is going to be an interesting race!"

Behind Audi’s Loic Duval in third, Paul Di Resta, a winner at Brands Hatch last year, posted the best qualifying result for R-Motorsport Aston Martin, lining up fourth. After the Scot’s third place in qualifying the opening race at Hockenheim, it is the second time this season that an Aston Martin starts from the second row of the grid.

Audi driver Robin Frijns qualified fifth, ahead of BMW’s Sheldon van der Linde. Jake Dennis, who topped the time sheets for quite a while, ended up seventh with his Aston Martin Behind Audi’s Loic Duval in third, Paul Di Resta, a Juncadella was classified tenth – making it three R-Motorsport Aston Martins in the top 10.

Qualifying was interrupted with red flags after Pietro Fittipaldi crashed heavily at Paddock Hill Bend. He got out of the car by himself, but was taken to the medical center for examination. The Armco barriers had to be repaired, with action resuming after 20 minutes. On the same lap as his team-mate’s crash, his team-mate Jonathan Aberdein also hit the tire stacks coming out of Clearways, but with significantly less damage.

Earlier in the morning, Robin Frijns had come out on top in the weekend’s only free practice session with a time of 1m16.318s. Meaningful lap times could only be set in the first 20 minutes. After that, a downpour prevented any further improvements. The only incident was Ferdinand Habsburg’s Aston Martin getting stuck in the gravel bed at Druids. A slow zone was put in place to allow for the beached car to be recovered.

Following qualifying, the DTM revealed that the three best-placed BMWs in the first race "will not be counted for the manufacturers' classification".

This is due to BMW making a request to the technical delegate for the seals to be opened on three additional engines.

It means BMW has fallen foul of Article 28.5, which reads: "Each competitor has the right to submit a written application for a late engine sealing of engines to the Technical Delegate.

"If any such application is approved, the highest classified driver of the corresponding make at the next race following the engine replacement will not be considered for the make classification in that race.

"In the case of additionally approved applications, the accordingly next classified driver/s of the corresponding make etc. will not be awarded any points in the make classification of the next race."