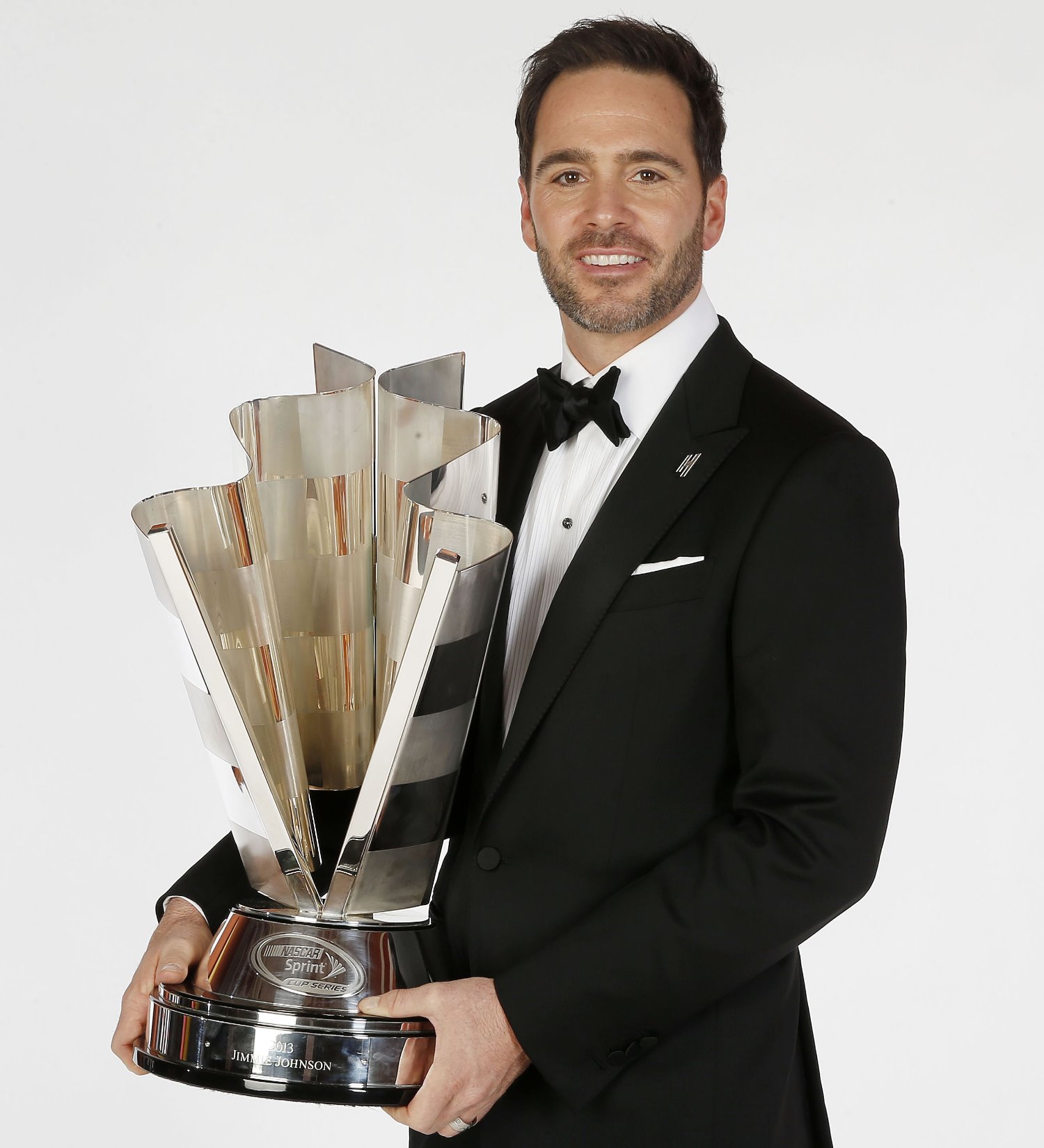 THE MODERATOR: We'll continue with today's media availability. We're joined now by six time NASCAR Sprint Cup Series Champion Jimmie Johnson, driver of the No. 48 Lowe's Chevrolet for Hendrick Motorsports. Jimmie, what's it like to be back here at the world center of racing as we get ready for the 56th running of the Daytona 500?

JIMMIE JOHNSON: Definitely excited to be back. Wish I was on the racetrack, like I'm sure everybody else does, burning some gasoline and learning about our race cars. But Mother Nature has a different plan for us today, I guess.

But it's great to be back. There is no other sensation when you come into a racetrack like there is here. So driving through the tunnel and popping out in turn four and looking around and realizing you're here is always a great way to start the season.
Q. Whether it was Hank Aaron chasing Babe Ruth's home run record, this year, I think, is probably going to be different for you going for title number seven. Do you anticipate sort of a different feel to this year as that goes on?

JIMMIE JOHNSON: I haven't put much thought into it. But if it becomes and the opportunity is there in front of us and we get deep in the Chase and have a shot at it, that reality is going to be hard to keep that out of my mind. I'm sure the questions that would come with it as well would let me let it slide by.

But amazing opportunity to have ahead of myself, to have six company championships is something I'm extremely proud of. If I was able to tie, I don't know what it would mean or what that experience would feel like, but to be up there with those two legends would be top of the list. Pretty cool.

Q. If you could give me I'm doing a piece on turning points in driver's careers. In other words, when you felt like you were discovered or something that happened in your career that got you noticed, what would you say that could be possibly for you?

JIMMIE JOHNSON: Gosh, there are so many of them. I mean, the first one would be when I was 15. There is a man named Jeff Bennett that owned a pet food company that had five little buggies that raced in the Mickey Thompson Stadium Series. One of his drivers left to be the back up driver for Cal Wells Toyota Racing Team that they had in the Truck Series. When he left mid season, it left an opening for somebody to come in. Through my dad's persistence and some sponsorship help, I was able to get that seat and got going.

The next opportunity was one key race in Los Angeles at the Los Angeles Coliseum where I had a stellar night, and the head of the GM race shop at the time, Herb Fishel was there watching. He sat in the grand stands and watched every event all night long, spotted me through qualifying my heat race victory and then the main. That interaction later led to my chance to be a test driver for Chevrolet as they developed a new stadium truck and led to my job there and being part of the Chevrolet family at that point.

Then when things really got serious, I would say, and it led toward the asphalt path is when I met the Herzogs. I was doing pit road reporting for Chevrolet. They helped me with the opportunity. But I was doing pit road reporting in the off road series in the Midwest, and met the Herzog's there. And that really got me going into the asphalt world. Though it was maybe five years later before I was on the asphalt in the ASA, but that led to that opportunity.

Until then, I felt like IndyCar was the path for an off road racer and a west coast racer and stock cars. I liked them. I just wasn't around them and it didn't seem like that's where my opportunities would lead me. So being associated with the Herzogs and them being a team that Chevrolet wanted to groom and me being a driver they wanted to groom, it worked out and got us to ASA and Nationwide.

JIMMIE JOHNSON: We have one test date set right now for a non plate track. But I was in the shop yesterday and we're not exactly sure where the rules are just yet. It's tough to complete the cars and go test and know what you're going to have because we're still waiting for the rule book to be finalized for the intermediate package.

But as soon as that stuff is nailed down, we'll go to the track at least once. I would assume probably twice before we unload in Phoenix would be a realistic goal at this point with needing to build equipment and getting everything up to spec and ready to race.

Q. Brian France talked twice since the off season about incentivizing winning and risk taking and looking at it and essentially hinting at changes. What are things that could be done? I mean, obviously at the end of the day if you win, you're going to win the championship. It's about the wins. Does it need to be more about making winning more valuable? Helping later in the pack, are there certain things to do? Does it bother you when people think that you guys need more incentive to go for the front?

JIMMIE JOHNSON: Yeah, I think for being in the car it doesn't change the driver's mindsets much. I mean, it might take someone from roughing someone up to dumping him. It might bring that in. Maybe that is the excitement that some have in mind that's the fix or would be more entertaining.

But I think it's just more perception in some respects and looking at it and putting more weight on winning because it's not going to change what I do in there. I mean, I'm trying to get every point I can and win every race I can. So I don't see a big impact there.

But if it changes perception and pulls it in the right direction, awesome. If it gives us great story lines to talk about and write about, awesome. There is no down side in that.

But I think the big picture looking forward is format changes and qualifying is going to be far different than anything we've ever seen. I think that is where the magic lies is in format changes.

Q. Did you know the new qualifying format?

JIMMIE JOHNSON: I thought I knew it, but yesterday Chad brought me up to something different. The last I heard was the town hall meeting we had, then I disconnected and was brought up to speed yesterday. It's way different, certainly will build a lot of excitement, tough to figure out.

The great thing as Chad and I were discussing, there are opportunities within that to get it right and get a bunch of poles.

JIMMIE JOHNSON: Things always change with rules, tires, formats. We always look at ourselves as individual members of the team and what we can do better at. Last year let a lot of races slip away during the regular season that I shouldn't have. So that is an area that I've got to focus on for whatever reason, if it's procedures during the restart or just not closing at the end. I let some slip away that I need to correct.

But we'll all look at our individual areas. This year, there is a lot of change, at least until the green flag drops come race time. That will keep us all really busy for at least until the halfway point of the season, trying to grasp what the car wants with the new rules package and the format for qualifying.
Q. I wanted to follow up on something you said earlier. Conventional wisdom is you're one of the best guys in the garage in terms of giving feedback and interpreting what the car is doing. How much did your days as a Chevy test driver sort of engrain that mindset and help you develop that ability?

JIMMIE JOHNSON: Those days really did. I feel like being the B driver through my Chevrolet days and watching Rick Johnson in the stadium truck and Larry Ragland in the desert truck coming through the Nationwide ranks and actually going through ASA and watching Gary St. Amant who worked with me there. In Nationwide I had a number of friends in the garage area that could help me.

I could spot early that communication was key. I felt like my off road days, one helped me with the sensitivity of it, because it's really tough when you're on a dirt surface and you're airborne half the time what adjustment really helped. You had to focus in on what made the truck faster. But at the same time it helped me compromise.

I feel like compromising is a big part of what we do on the Cup series and in a Cup car. You have long runs; there is a big fuel burn on the car, balance changes from the start of the run to the end of the run. The tracks, there is a difference between a turn one and two side to a three and four, and that compromise, I think, has helped me a lot from my dirt days to carryover.

There are times when it comes to qualifying trim that I have to lay down a fast lap, and that affects my qualifying performance. I'll compromise, and, yeah, we're good then qualify tenth. I should be a little more specific maybe in trying to perfect things a little bit more in qualifying trim to get that fast lap.

But I say all that with the old format, and now it looks like you're on the same tire for however many laps you decide to run in the qualifying, so maybe the compromise will come back into play for me.

Q. Can you talk about Kyle Larson coming in this year to Ganassi and how he's going to do in your opinion? What kind of challenges is he going to face with the pressures of Sprint Cup now?

JIMMIE JOHNSON: Yeah, I think the biggest thing is just the pressures. If he can keep his blinders on and live within the walls of his team, he's very good at driving within his own means, and I think that's key. Just let time take its course. Outside world will probably be less patient with him than his race team and sponsors will. As long as he identifies that and stays within the walls of his shop, he's shown he has the talent and he'll mature and learn.

Unfortunately, part of the learning process is making mistakes, and the spotlight is going to be very bright on him. Hopefully he can shrug that stuff off and keep growing.