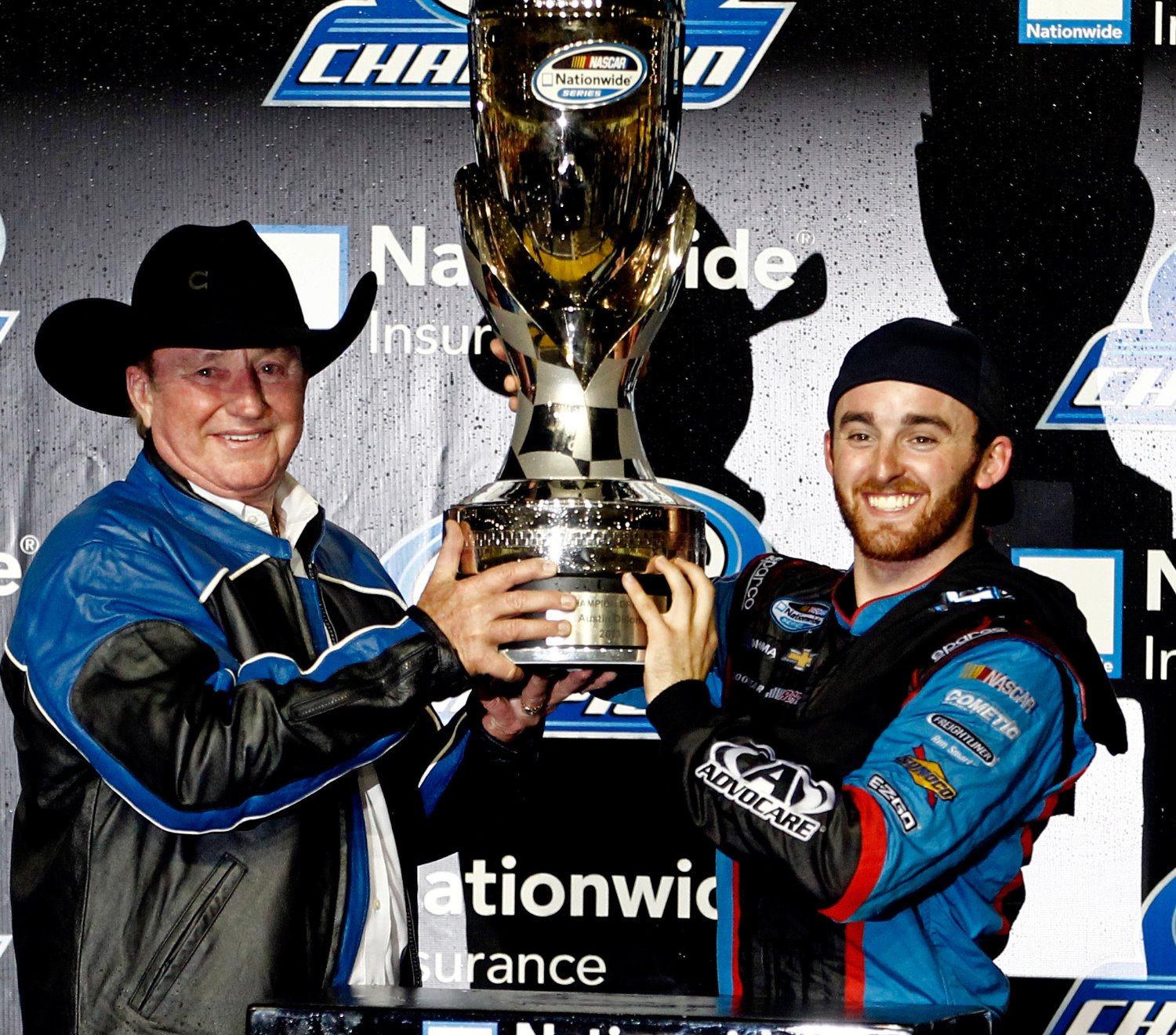 Brad Keselowski ‘s reign as a Sprint Cup Champion may be coming to an end, but the defending champ is determined to go out on a high note.

Keselowski won his seventh NASCAR Nationwide Series race of 2013 in Saturday night’s Ford EcoBoost 300 at Homestead-Miami Speedway and helped secure the owners points title for Penske Racing, while Austin Dillon won the driver’s title over Sam Hornish, Jr. by just three points in a controversial finish that left many scratching their heads.

Just one day after witnessing one of the most competitive races of the season in the truck series finale, NASCAR seemingly fumbled the ball in the final laps of the last Nationwide Series event of the season with an extended yellow flag that left just five green flag laps to decide the race and the championship battle.

After racing resumed following the lengthy caution flag, Keselowski tore through the field on the final restart, riding his fresher tires from 11th to first in just three laps, passing Kyle Larson with three to go to cruise to his 27th-career Nationwide Series victory.

Larson held onto the runner-up spot and locked up rookie of the year honors with his ninth top-five finish. Kyle Busch finished third, followed by Matt Kenseth and Trevor Bayne.

Keselowski, who failed to even qualify for the Chase for the Sprint Cup and chance to defend his 2012 title, also clinched the manufacturers title for Ford as well has contribute to Penske’s second straight owner’s title in the no. 22 car, accounting for half of the team’s 12 victories this season.

“We came (to Homestead) with four goals – win the driver’s championship with Sam Hornish, the owner’s championship with the 22, win the race and help Ford to secure the manufacturers’ title. We accomplished three out of four, which I guess ain’t bad," said Keselowski. “Certainly it’s not the year we want on the Cup side. I’m not gonna hide or run from that, but we did achieve some success in different forms this year and this owner’s championship is a reflection of that. It’s win or go home. That’s how this sport works."

Driving a Chevrolet emblazoned with the same no. 3 made famous by the late seven-time champion Dale Earnhardt, Dillon rallied back to finish 12th to win his first Nationwide Series title, becoming the first driver in NASCAR history to win a national championship without winning a race all season, tallying three runner-up finishes. Dillon also joins Greg Biffle and Johnny Benson, Jr. as the only drivers to win a title in both the truck series and Nationwide Series, having won the truck title in 2011.

“We fought," said Dillon. “My guys kept me positive in the car. I just knew I had to go on that last restart. I’ve been criticized on restarts for a long time, but that was a pretty good one. I just hung up against the wall there and tried to ride it out. Thank goodness for this AdvoCare Chevrolet and everybody that helped us. My grandfather (Richard Childress) and my whole family are so supportive. My team is the best and this is amazing.

“We didn't have the fastest car. It was ugly the way we did it, but we showed we had heart. We're never going to give up. It paid off in the end."

In the early laps of Saturday’ night’s race it looked as though the championship had slipped out of Dillon’s reach, as an ill-handling race car dropped him back as far as 21st in the field and 13 points behind Hornish.

As the race wore on, Dillon’s crew worked feverishly correct the handling on the car, and the hard worked seemed to pay off as Dillon climbed into a tie in the points by lap 119. From there, it was a game of cat and mouse as the points lead changed hands by only one or two points for much of the second half of the race before Dillon moved ahead by five points.

The turning point of the race came on lap 184, when Regan Smith and Jeremy Clements crashed to bring out the tenth caution flag of the event.

During the ensuing cleanup from the wreck, NASCAR elected to keep the field under yellow – rather than red-flag the race – running the next 13 laps under caution, leaving just five laps to decide the race and the championship.

After three aborted restarts, racing resumed on lap 195 with Larson leading, followed by Busch, Hornish, Kenseth and Dillon, with Dillon ahead of Hornish by five points.

Keselowski, having pitted under the previous caution with 20 laps to go, blasted through the middle of the pack on fresher tires and moved into the top five after just one lap before ducking to the inside of Larson in turn two with three to go to take the lead.

Hornish, needing to make up five spots to get into a tie in points with Dillon, faded back on older tires but still managed to claw his way up two spots to finish eighth, but still three positions short.

“What can I say? Any other time there probably would have been a caution. It’s just one of those things that it wasn’t meant to be tonight," said Hornish, who will not return to Penske Racing next season. “I wish that we would have been able to bring it home, but to have the opportunity with about where we were at the halfway point of the last race out in Phoenix, this was a great opportunity."

The extended caution period left many wondering why NASCAR didn’t red-flag the race to allow as many green-flag laps as possible to decide the season-finale event, including Hornish’s team owner, Roger Penske.

“I have to say I've never seen a race that was so important that you wait 15 or 16 laps before you have five laps to go. To me that was very disappointing from the standpoint of the fans," said Penske. “It was hard for me….to believe that we'd sit there for 15 or 16 laps with so much at stake, not only for Sam (Hornish), but for (Austin) Dillon, for Ford, Toyota, Chevrolet. It was hard for me to believe."