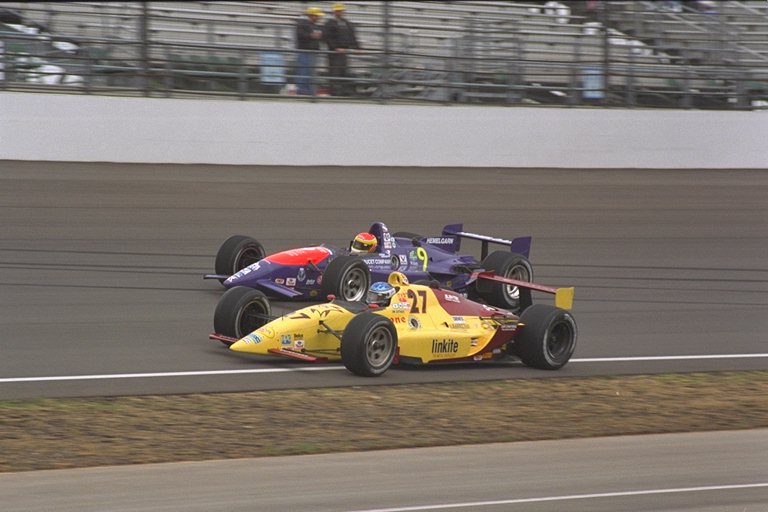 One of the biggest miracles ever performed on four wheels took place on March 23, 1997 at Phoenix International Raceway. I remember sitting in my living room and watching the entire Indy Racing League Phoenix 200 on ABC, stunned into silence.

It was an upset so staggering that it transcended the petty IRL-versus-CART arguments. I bet you remember this race, too. So I called up Jim Guthrie's New Mexico office last week and asked him to re-live the moment for us. The story goes like this…

His new team, Blueprint Racing, was flat broke and desperate. They had one engine, one race car, no trailer to haul it and no sponsor to paint on it. Their race crew was comprised of volunteers because they had no money to hire anyone.

Jim Guthrie's dream was to drive Indycars full time. Like so many other American drivers, he had paid his dues in Trans-Am, Formula 2000 and many other series only to find that there was no chance of a grass roots racer making it in CART. Then Tony George's IRL – for better or worse – offered a narrow window of opportunity.

Guthrie bought a Dallara Indy car. In 1996-97 he ran a handful of races and found that he was surprisingly competitive. The tour's upcoming stop was at Guthrie's home track in Phoenix, where he had hundreds of laps in many different types of cars.

“We rolled off the trailer and we were quick," Guthrie remembered of his first practice session for the 1997 Phoenix 200. “So we'd run a few laps and come in and make a few shock changes or a little ride height. Nothing major. Then we'd go out and run a few more laps. We had only one engine so we did very short runs. Then we just parked the car.“

Surprisingly, Blueprint Racing qualified on the front row, losing the pole position to Team Menard's Tony Stewart by the narrowest of margins. That, in itself, was success beyond anything the racing world expected.

Once time trials were finished, the crew had little to do other than eat dinner and wait. “Everybody else was changing engines and going through everything. But all we did was wax the car and change the oil because it's all we could do. We didn't have anything else."

Race day was sunny and cool. Guthrie's wife, children and parents were there, knowing that all of his hopes and dreams were on the line. “So we go out to Phoenix with borrowed parts on the car. We knew it was a do-or-die situation. I had borrowed money from relatives and friends and vendors."

Still, something felt right. His confidence soared. Just before climbing into the cockpit, Guthrie fastened his helmet, slipped on his gloves and turned to his wife. “Make sure my Dad knows how to get to Victory Lane because I'm gonna win this race."

The green flag fell to the beautiful roar of naturally-aspirated engines and it soon became apparent that the race would be a showdown between Guthrie and IRL superstar Tony Stewart. Early in the event, future Indy 500 winner Kenny Brack and reigning IndyCar champion Scott Sharp took turns at the front of the field. There were plenty of other heavyweights in the race including Roberto Guerrero, Scott Goodyear and Arie Luyendyk. But ultimately, none of them had anything for Guthrie and Stewart.

The strategy was already settled in Guthrie's mind. “I just wanted to follow. (Stewart) was on Goodyears and I was on Firestones. I knew if I pushed him, I could make him wear his tires out. And sure enough, I was on him and I could watch him. Every time, coming off Turn 4, he was leaving rubber. So I just kept pushing him. I thought that I had complete control of the race. I was so comfortable."

Brack still led after 140 of 200 laps, with Davey Hamilton, Stewart and Guthrie all in the running. The heavily favored Tony Stewart drove like a man possessed. He sliced through traffic, going three-wide through Turn 4 and charging to the front. When Brack smacked the wall in Turn 3, Stewart inherited the lead and appeared to be in control until stopping for a final splash of fuel.

The move defaulted the lead to Guthrie, who had carefully planned his fuel mapping for a two-stop race and was waiting for just such a moment. Then Jim Guthrie did something amazing. He began to pull away from the field.

It was only then that the world woke up and realized that Guthrie might actually win. ABC commentator Jack Arute said, “They're unsponsored… they're like the David and Goliath story." TV anchor Paul Page was shocked when Guthrie began laying down lap times nearly 4 mph faster than anything Stewart could manage.

With an urgency in his voice, Team Menard manager Larry Curry shouted at Stewart on the radio, “The leader is getting away from us!" He was right. For those who hadn't been paying attention during testing, practice and qualifications, it was becoming painfully obvious that this was no fluke. Despite all of Blueprint Racing's shortcomings, their lack of funding and their near total inexperience in Indycars, they were simply faster than anyone on the race track.

Sam Schmidt's crash with about twenty laps remaining bunched up the field and gave Stewart one last shot. Team Menard pitted for new, softer tires and trimmed the car out for a final run to the checkers.

“That yellow was probably the saving grace for me," Guthrie said. “Otherwise we would have definitely had a shootout because I would have had to pit for fuel. Every time it went yellow I swung out in the open to keep the car cool. If it got warm I'd click the fuel dial up one position. Again, we had our own fuel dial back then so you could manage your own fuel consumption."

On the re-start, Guthrie deftly waited for second-place Davey Hamilton to accelerate too soon and then hit his brakes. A microsecond later, Guthrie nailed the throttle and cruised away from the field, holding off a late charge from Stewart to win the race.

Other than the cars of Hamilton and Stewart, Guthrie had lapped the field.

“The only thing that was a little unsettling was when I caught Buzz Calkins down in the middle of Turn 1 and 2 right before the end," Guthrie said. “That allowed Tony to close the gap. I wanted to be super cautious and not screw up on the last lap so I went down a gear, cruised around Buzz, and then just squeezed the throttle, went into high gear and finished the race."

“But on that last yellow I never looked back. It was weird. Eddie Cheever came up to me after the race and said, 'I was watching you and you never looked in your mirror.' I said, 'Nope. There was no reason to.'"

Guthrie won $185,400. He owed $180,000. Now he was broke again. The next race was Indy. That meant more borrowing and more begging for free parts and help. And he was running out of friends to borrow from.

Returning home after the Phoenix 200, Guthrie found a strange message on his voice mail. It was from the CEO of a company he'd never heard of called “US Industries." The message was brief.