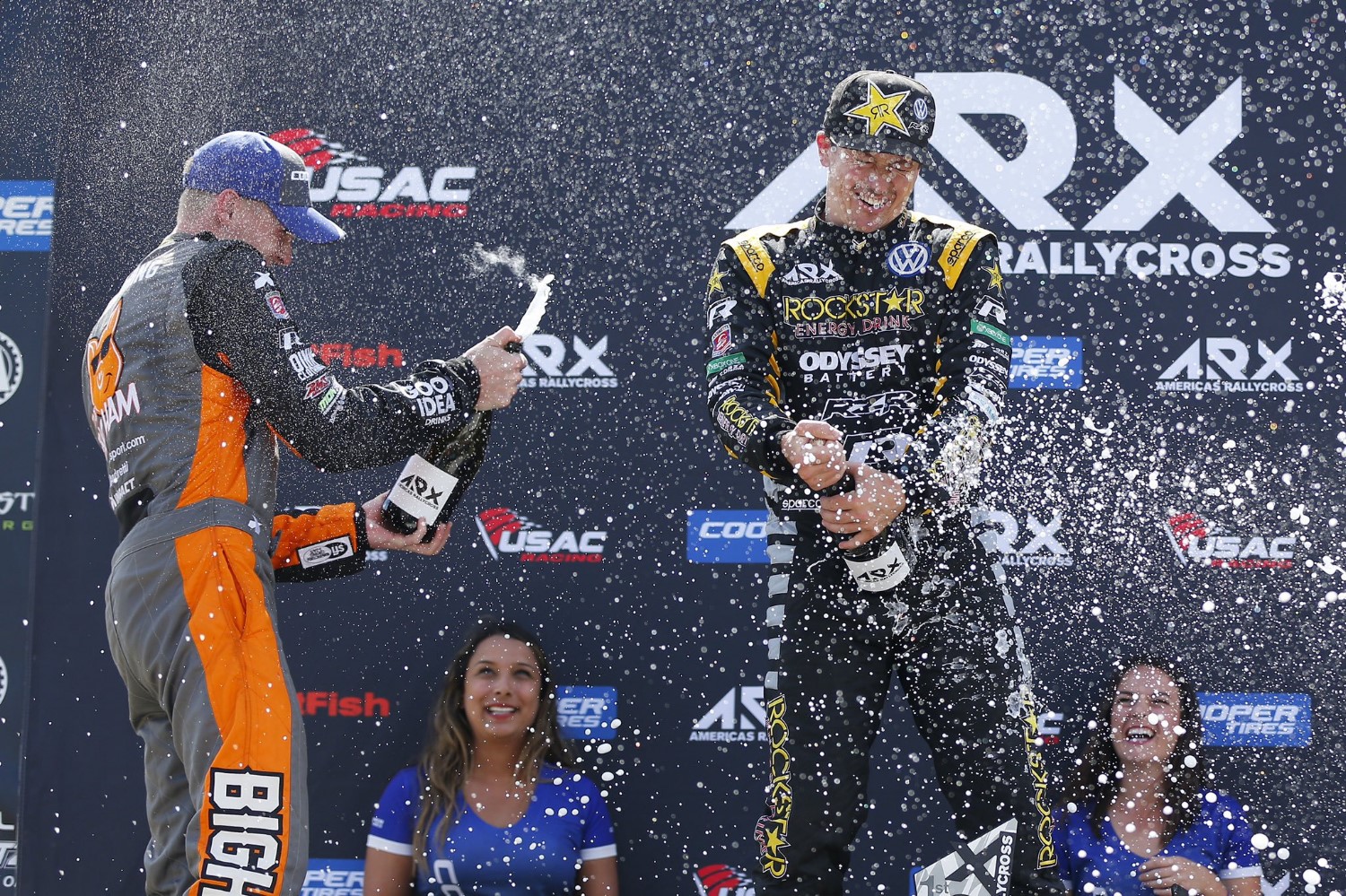 Andretti Rallycross’ Tanner Foust and Cabot Bigham captured a thrilling one-two finish in the ARX of Canada, Round 4 of the 2019 ARX Supercar Championship.

Foust became the fourth different winner in four rounds this season at the famous Grand Prix de Trois-Rivieres venue by claiming the hole-shot from the outside of the three-wide front row of the grid in the final.

In the No. 34 Rockstar Energy Andretti Volkswagen Beetle R, Foust led the final for all the laps bar one in the six-lap race, only overtaken by championship leader, Subaru Motorsport USA’s Scott Speed when Foust took an earlier joker lap to fend off his teammate, Bigham, who took the victory in semi-final one, the first race win of his ARX Supercar career.

Speed suffered a gearbox issue while leading the second semi-final, surrendering the victory and a front-row start to Loenbro Motorsports’ Steve Arpin. In the final, Arpin made the strongest launch to grab the initial advantage, but out-braked himself into the first turn and dropped to seventh in what was the first-ever seven-car ARX final.

The Subaru team put in an incredible effort to fix Speed’s Subaru WRX STI in record time before the final and the 2018 ARX of Canada winner immediately got to work at the start and climbed to third on the first lap. He eventually led the race when Foust and Bigham took their joker laps but dropped back to third after his own joker on Lap 6, as Foust eventually claimed a dramatic win.

Round 2 winner Chris Atkinson finished fourth in his Subaru WRX STI after battling with Arpin in the final. Arpin’s Loenbro Motorsports’ teammate Travis PeCoy starred once again this weekend with tough overtakes to get by Foust and Speed in the second round of qualifying on Saturday and took the overnight lead in the Intermediate Classification. On Sunday, he battled with fellow rookie, Bigham, in Qualifying 4. However, a slow start in the first semi-final meant he started on the outside of the third row in the final and ended up finishing fifth, one place ahead of Arpin.

Round 3 winner from the ARX of Gateway, Patrik Sandell, set the pace in Qualifying 1 and 3 in the No. 18 WRX STI and took the top-qualifier (TQ) position at the end of qualifying on Sunday. In the opening semi-final, the Swedish veteran was overtaken by Bigham in turn two and then crashed out of the final after contact with PeCoy at the end of Lap 1.

With two rounds remaining at the Circuit of The Americas and Mid-Ohio Sports Course, Speed leads the standings by five points over his former teammate, Foust, and 14 points ahead of Sandell.

Tanner Foust
No. 34 ROCKSTAR ENERGY DRINK VOLKSWAGEN
â€¢ STARTED 3rd // FINISHED 1st
â€¢ CHAMPIONSHIP: 2nd (95 pts.)
â€¢ OF NOTE: Second-consecutive podium of the 2019 season
"Based on Saturday's results, I wouldn’t have thought this would have happened. The Subarus had the speed, so we felt a little bit like underdogs all weekend and most of the year, which is what makes this win so much sweeter. Finishing today 1-2 after feeling like the underdogs is fantastic. I have to give credit to Volkswagen and Andretti Rallycross and their engineering and mechanical skills. They both allow us to have competitive machines who can compete against the 'Goliaths' out there on track. It is an awesome feeling and I haven’t felt a win this sweet in a long time."

Cabot Bigham
No. 02 OINK CLOTHING VOLKSWAGEN
â€¢ STARTED 2nd // FINISHED 2nd
â€¢ CHAMPIONSHIP: 7th (65 pts.)
â€¢ OF NOTE: Won Semi-Final Heat 1 to earn front row starting position for Final // First podium of ARX Supercars career
"Today was a fantastic day, finishing second overall. I struggled a bit this weekend and earlier today, including an accident in Q3 then a DNF in Q4. We got a phenomenal start in the Semi-Final allowing me to slot into first place and win my heat. Winning my Semi-Final heat allowed me to drive pole for the Final. I can’t thank the Andretti team enough for keeping me motivated and not letting me get down on myself too hard. ARX is a very dynamic sport and having a supportive team behind you is everything. I am really looking forward to our next round in COTA."