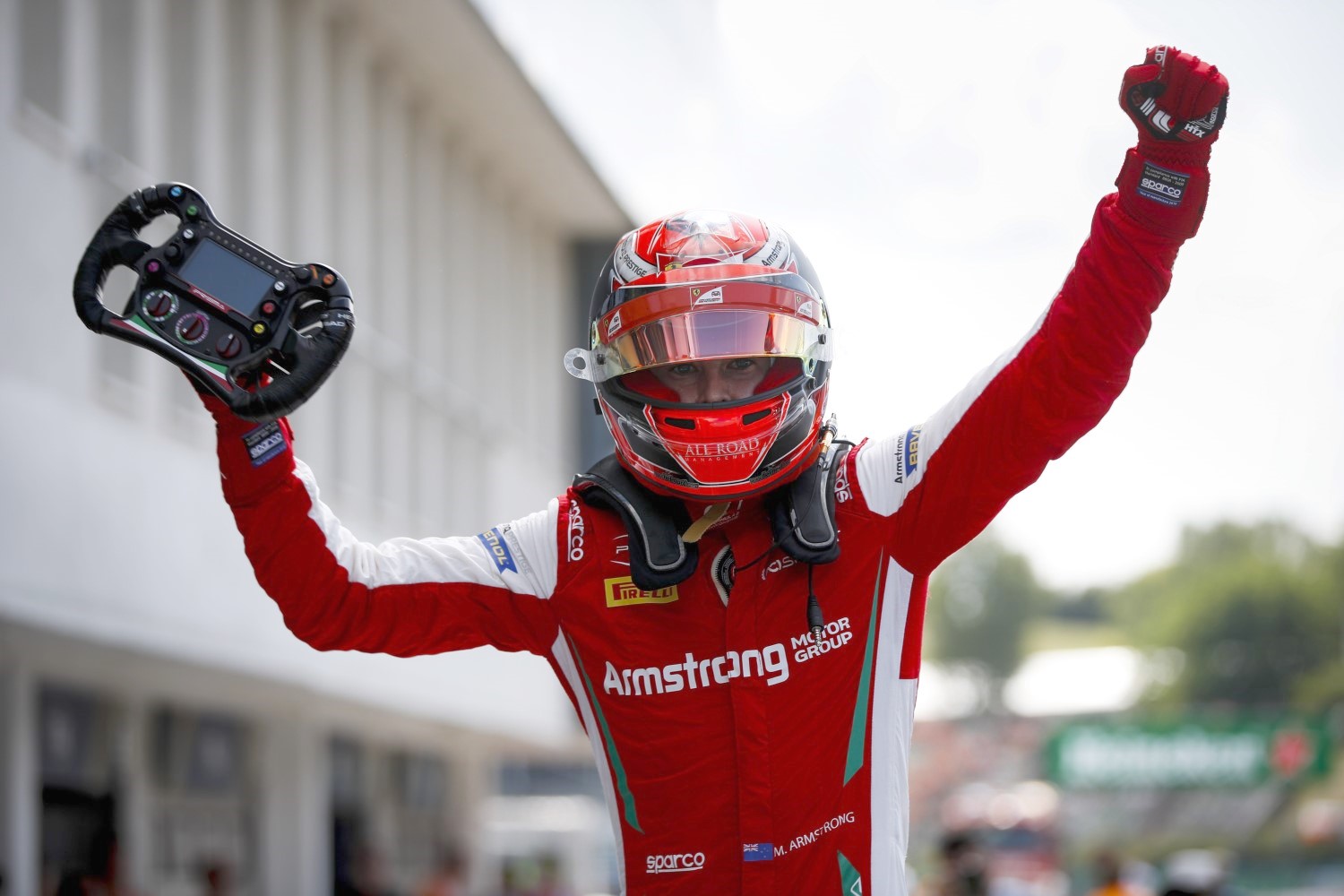 Marcus Armstrong ruled Race 2 in Budapest with a lights-to-flag finish that saw him cross the line a massive 12s ahead of Leonardo Pulcini for his first ever FIA Formula 3 win.

The PREMA man had spent a mammoth 97 Laps inside of the top three ahead of Round 5, but was yet to have a victory to show for it. He set the record straight on Sunday with a dominant drive around the Hungaroring, ahead of Hitech Grand Prix racer Pulcini and HWA RACELAB’s Jake Hughes.

The Kiwi brushed off an attack at the start from the Italian, who attempted to pass him on the second turn. The duo kissed tires, which forced Pulcini to ease off and allowed Armstrong to scuttle on ahead.

There was little movement in behind, with most of the top ten clinging onto their original positions. Felipe Drugovich in particular was hanging onto 3rd by a thread. He was being hounded and harried by the dazzling red PREMA of Robert Shwartzman, but just about survived the opening few laps.

The battle continued as the lap tally hit double figures and still Drugovich would not falter. PREMA urged Shwartzman to overtake, but he was struggling to find the speed or the space. Eventually he gathered enough power to pull side-by-side with the Carlin Buzz racer, who remained just millimeters in front.

Just as Drugovich thought he had held on, his tire was struck by the front-wing of Shwartzman, which tore into his rubber and caused a puncture. He quickly dropped back and would eventually retire from the pits. Shwartzman was momentarily in 3rd, but his front-wing was battered and his bruised PREMA couldn’t sustain the pace and he too dropped back, before also retiring from the pits. Stewards swiftly deemed the collision a racing incident that required no further investigation.

This handed Juri Vips the podium place he came so close to clinching in Race 1. Initially, it was Max Fewtrell in behind, but the Briton slowed and fell out of contention. This allowed Hughes into 4th and a chance at a second podium place. Race 1 repeated itself as the HWA racer bombed down the side of the Estonian on the straight and into the first corner for 3rd.

The chaos going on behind had allowed Pulcini to put 18s between himself and 3rd place, while Armstrong topped the pack by 12s, meaning the duo crossed the line unchallenged. In 3rd remained Hughes, with his second podium of the weekend, as Vips and Christian Lundgaard completed the top five. Yuki Tsunoda finished 6th, ahead of Jehan Daruvala, who had managed to climb into the points for the first time this weekend. Logan Sargeant, Liam Lawson and Bent Viscaal completed the top ten.

Having missed out on the points in Race 2, Shwartzman’s lead at the top of the Drivers’ Championship has been slashed to just 12, ahead of Vips, who is on 112. Jehan Daruvala is only eight behind, while Armstrong has 98. Lundgaard completes the top five with 73. In the Teams’ Championship, PREMA retain their stranglehold with 326, ahead of Hitech Grand Prix on 165 and ART Grand Prix on 147. HWA RACELAB are fourth with 66 and Trident 5th with 58.

With the title chase closer than ever and just 20 points separating the top three in the Championship, the next round in Spa-Francorchamps, Belgium will be unmissable, when racing returns at the end of August.