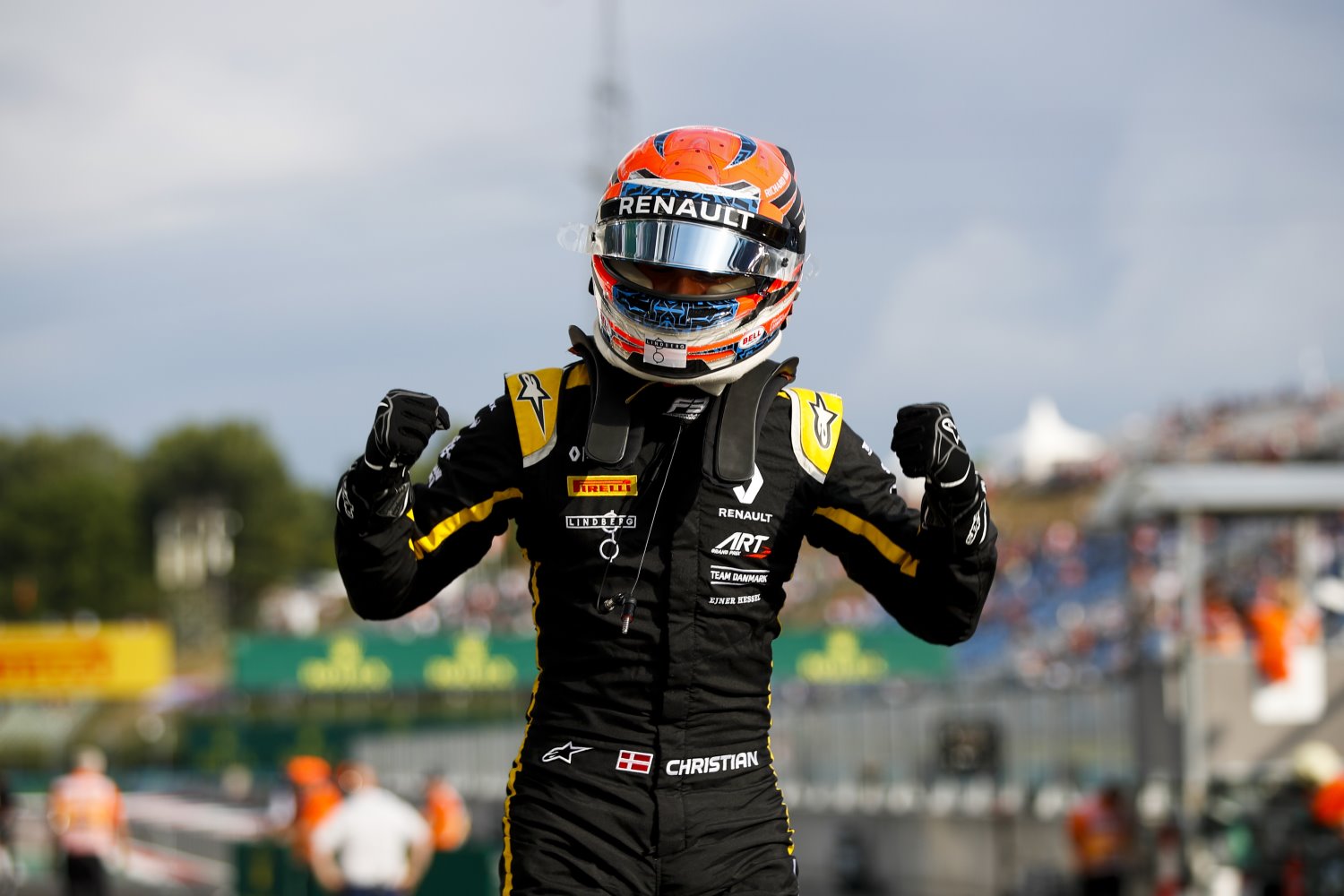 Christian Lundgaard took his first ever FIA Formula 3 win in style today, marching round the Hungaroring in 1st from lights-to-flag. The Danish driver continued his so far flawless weekend with his third P1 finish of Round 5, ahead of ART Grand Prix teammate Max Fewtrell and HWA RACELAB’s Jake Hughes.

The Dane may have clung onto 1st at the start, but there was plenty of movement behind him when the lights went out. Fellow Renault Academy driver Fewtrell hugged the back of him off the line to hop up to second. Niko Kari also benefited from JÃ¼ri Vip’s sluggish start from P2, lunging to third whilst the Estonian dropped to 5th. Championship leader Robert Shwartzman also suffered frustration as he dropped four places to 8th.

As those in front looked to consolidate their positions on a dry afternoon in Hungary, drama played out at the back of the field. The rear tires of Raoul Hyman and Liam Laws

on’s machines collided, which sent the former into a dizzy spin. Thankfully, the Sauber Junior driver was able to recover, but Pedro Piquet in P4 wasn’t so lucky, suffering a brake issue which forced him into retirement in the pits.

Out in front, Lundgaard set the fastest lap on his way to collecting a tidy 3s lead, with Fewtrell and Kari still in procession. The Finn was clinging onto 3rd by the skin of his teeth, but seriously struggling with grip and looked to be fighting a losing battle with Vips in behind. Kari briefly skidded off track as he continued to suffer, but managed to claw it back and fend off the Estonian once again.

The Trident racer would have to do it all again two laps later when he locked up and went wheel-to-wheel with the Hitech man for what felt like an eternity. Eventually, he scrambled back in front, but he was in increasing danger. Vips waited three more laps to eventually make the move stick, as both he and Hughes dashed past Kari. Shwartzman followed through a lap later and Kari started to freefall.

Just when it looked like any further drama had been put to bed, Hughes appeared in the wing-mirror of Vips to steal the final podium place on the penultimate lap, weaving around the Estonian and bombing down the inside.

At the checkered flag, Lundgaard was over-the-moon to cross the finish line ahead of teammate Fewtrell. Hughes took 3rd place, with Vips settling for fourth. Shwartzman managed fifth, ahead of Felipe Drugovich who scores his first championship points, and Leonardo Pulcini. Marcus Armstrong managed to creep into the points in 8th, ahead of Yuki Tsunoda and Logan Sargeant

Shwartzman’s Championship lead has been cut to just 20 points, with the Russian leading Vips who has risen to 2nd on 104, ahead of Jehan Daruvala on 102. Armstrong remains 4th on 81, ahead of Lundgaard on 67. PREMA continue at the top of the Teams’ Championship, with 307 points, cleanly ahead of Hitech Grand Prix on 145. ART Grand Prix are third on 141, ahead of Trident on 58 and HWA RACELAB on 56.

With the Driver’s Championship now tighter than ever and a PREMA back on reverse pole, tomorrow’s race will prove to be a tense affair when it kicks off at 10am local time.