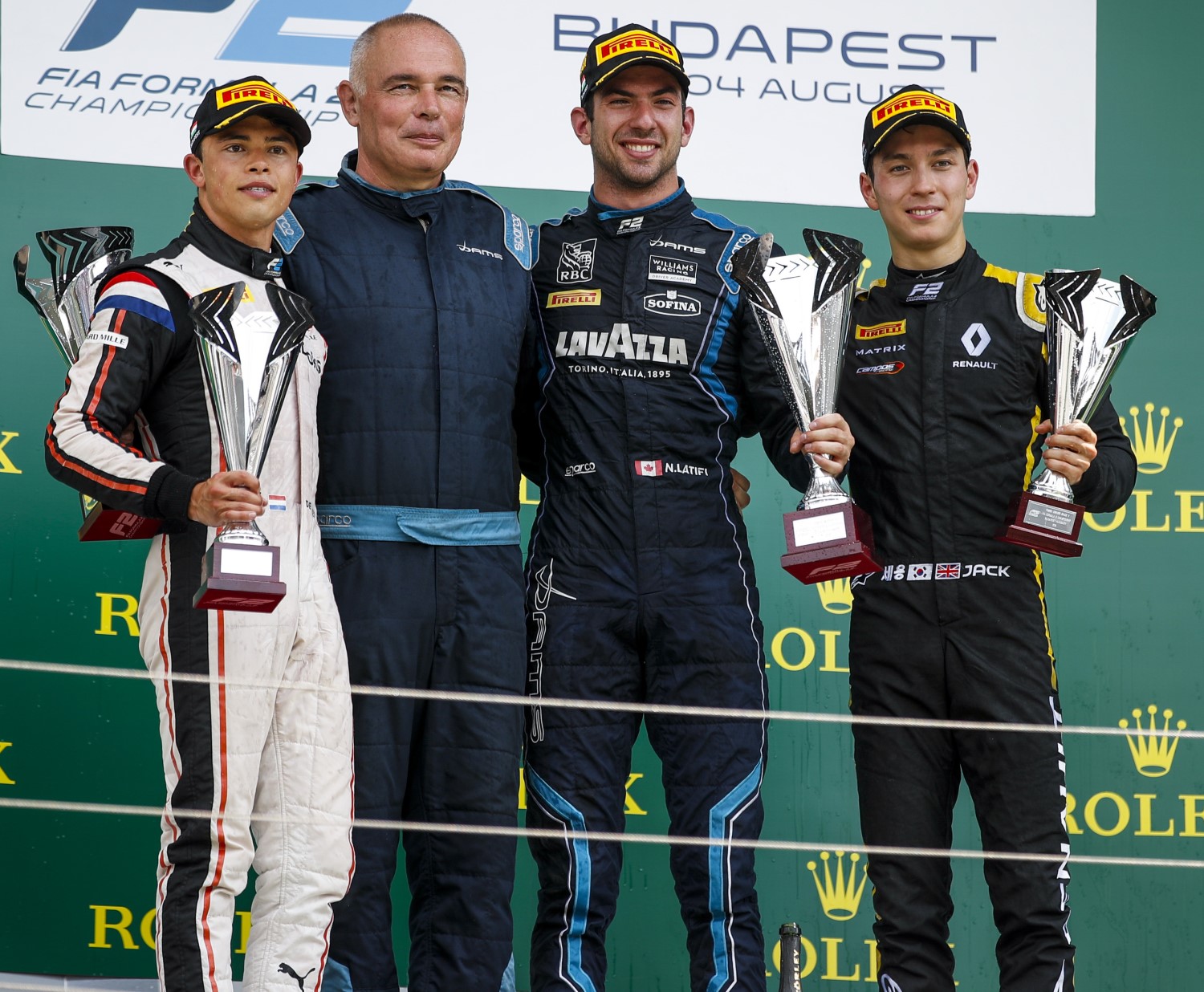 Nicholas Latifi won for the first time since Barcelona with a masterclass on the tight turns of the Hungaroring, bombing ahead of Nyck De Vries at the start and never wavering. Amazingly, it is the first time this season that the Championships’ top two have shared a podium, with the duo finishing ahead of Campos Racing’s Jack Aitken.

Despite the downpour in Friday’s Qualifying session, the rain held off on Saturday morning in Hungary and De Vries made the most of the dry surface to get away cleanly off the line, battling off a move down his right from Luca Ghiotto. Or, so he thought! Nicholas Latifi surged past them both on the left and nipped by at the end of the first turn, with De Vries’ locking up.

There were plenty of places gained further back at Turn 1 as Aitken jumped three to 5th, while Hubert hopped five to 13th. There was heartbreak for Louis Deletraz, whose slow start when the lights went out saw him drop to 8th, before his Carlin slowed down to a stop.

Aitken began hounding Mick Schumacher in 4th, who had fallen off the tail of Ghiotto. The German defended his position well, but lost out in the pits as Campos delivered a perfect stop, which saw the Brit nip ahead of both the PREMA man and Ghiotto.

By the time Latifi pitted a lap later, he’d built a strong gap over De Vries and returned in 6th place, directly in-front of the ART Grand Prix man who had already stopped. The race lead was handed to Jordan King who was on the alternate strategy.

Latifi briefly put space between himself and De Vries when he passed Ralph Boschung, but he got caught in traffic and the Dutchman began to catch him. There was a brief Virtual Safety Car as Arjun Maini pulled over onto the gravel and became the morning’s second casualty.

Nobuharu Matsushita passed Schumacher down the pit-straight when racing resumed, while Latifi zipped by Hubert for second, who was also yet to stop. By the time King pitted from first and handed Latifi back the lead, the Canadian had built up a 6s gap between himself and his title rival.

The front three spots were back into the hands of Latifi, De Vries and Aitken, with Ghiotto in 4th and unable to match the Brit’s speed. This sent the Italian into the clutches of Matsushita and sparked a mass brawl for fourth.

Ghiotto was able to fend off the Carlin driver, which sent him into the lurches of Sergio Sette Camara who had risen magnificently from 12th. The duo went two wide ahead of Turn 3, which put King into the mix. Narrowly avoiding a kiss of tires, the Brazilian and the Briton edged passed Matsushita.

The battles were brought to a swift conclusion when Boschung’s Trident went up in smoke and forced him to pull over onto the gravel. The race finished under the subsequent Safety Car, although Ghiotto and King were handed penalties after the checkered flag for a SC infringement and fell down the order. Latifi safely crossed the line ahead of De Vries and Aitken. Sette Camara claimed fourth, ahead of Matsushita, Ghiotto, King, Schumacher, Guanyu Zhou and Callum Ilott.

The Canadian’s victory sees him gain ground on De Vries at the top of the Drivers’ Championship, with De Vries now on 192 points and Latifi 28 behind him. Sette Camara moves up to third on 133, ahead of Ghiotto on 130. Aitken completes the top five with 128. In the Teams’ Championship, DAMS have increased their lead and now have 297 points, ahead of UNI-Virtuosi on 237. ART Grand Prix sit third on 198, with Campos Racing behind on 158 and Carlin on 135.

Schumacher will start on reverse pole for the first time since Bahrain in the Sprint Race and aim for a maiden win in F2 when action kicks off again tomorrow at 11.25am local time.