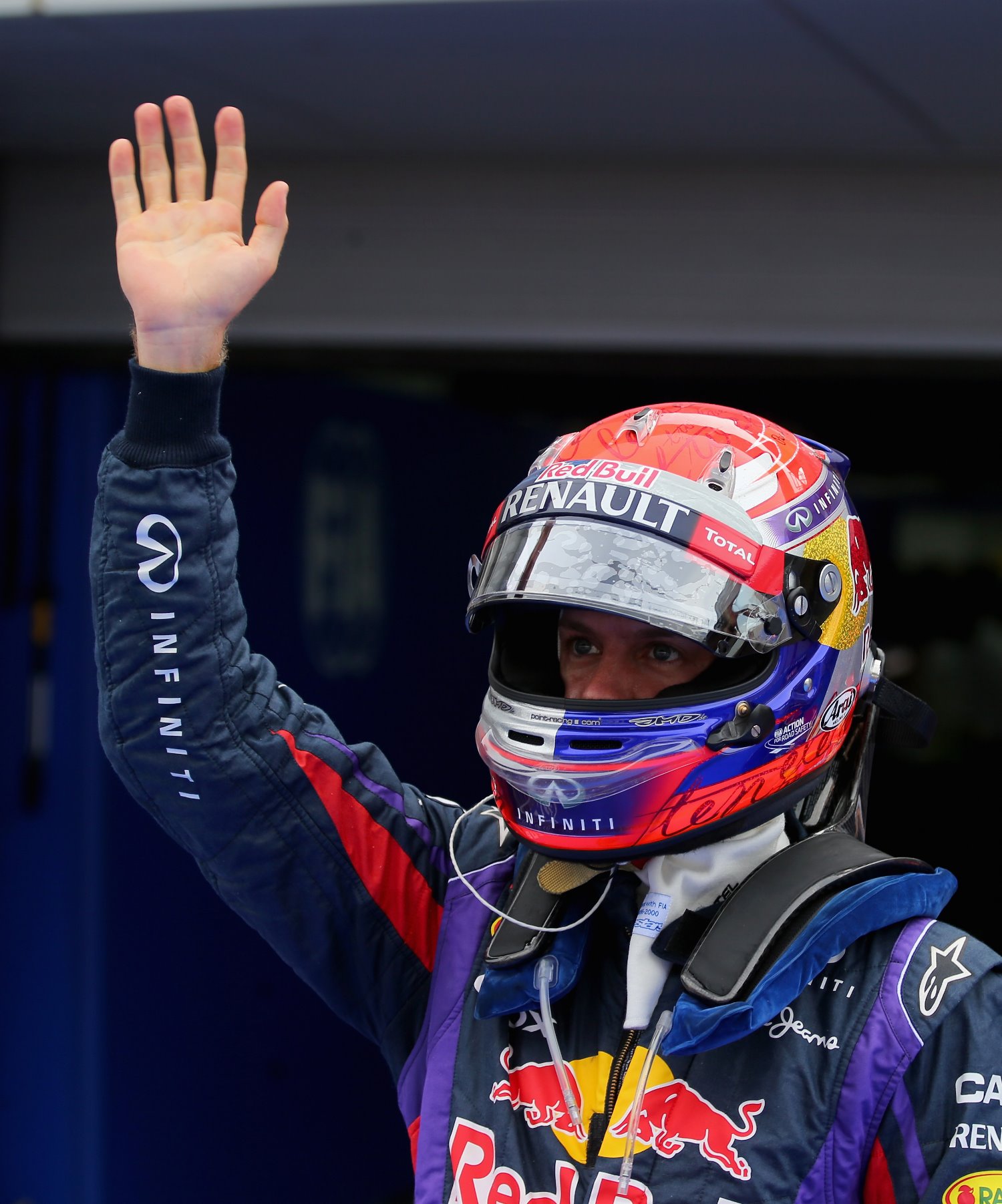 Although Hamilton was able to improve on his final pole shot, he was still 0.218s adrift of Vettel, who was able to back off his own last lap to save his tires for the race, confident pole was secure.

Webber also abandoned his final lap and stayed third in the times, which will become 13th on the grid when his 10-place grid penalty for accumulating three driving reprimands is applied.

Romain Grosjean will then start third, the Lotus driver having beaten the second Mercedes of Nico Rosberg and the Ferrari duo Fernando Alonso and Felipe Massa.

Grosjean's teammate Kimi Raikkonen, suffering with a painful back injury, could only manage 10th, 1.3s slower.

For the first time this year, Sauber got both cars into Q3, with Nico Hulkenberg and Esteban Gutierrez eighth and ninth quickest.

Alonso slams poor 'quality' of Pirelli tires
Fernando Alonso on Saturday put Pirelli back in the F1 headlines, after questioning the "quality" of the Italian marque's tires.

The Ferrari driver told reporters in Korea the tires "will not do 5km" – not even a single lap – around the Yeongam track without wearing out.

"We have to be honest," said Alonso. "The quality of the tires is very on the limit."

He also criticized the 'marbles' that are shed by the heavily-degrading Pirelli tires throughout the grand prix calendar, saying it creates a "two meters racing line".

Alonso insisted he is not blaming the tires for Ferrari's lack of pace.

"I'm sure with a better tire the others can push more as well," he said. "The deficit we have is the same with any tire, but at least you could drive."

Pirelli boss Paul Hembery is quoted by the BBC as saying Alonso's comments are "disappointing" and "below the standards you would expect from such a champion".

"I can only suggest he goes to ask the soon-to-be four time champion how to get the best from the same tires," he added.

We know we will struggle, says Alonso
Fernando Alonso believes it will be a major challenge to improve upon his qualifying result during the Korean Grand Prix, as Ferrari continues to struggle for raw pace.

Although he has failed to start on the front two rows of the grid since Bahrain, Alonso has finished second in the past three events. But the Spaniard, who starts from fifth after Mark Webber's penalty, feels another podium finish will be hard to come by.

"I think we are not particularly strong this weekend," said Alonso after qualifying. "In the race pace [during practice] yesterday we saw some problems, so I'm a little bit less optimistic in terms of winning or a podium finish. But we will try our best.

"There is a very short space to Turn 1, so we will do all our attacks at Turn 3 and Turn 4. There's always some action in this race, but we know that we'll struggle tomorrow."

Felipe Massa joins team-mate Alonso on the third row of the grid, and also expects Ferrari to endure a challenging race: "We're not just fighting Red Bull and Mercedes. One of the Lotuses is in front and we have other cars very close, like the Saubers.

"We're fighting with many other teams who are behind us but also very close."

The McLaren driver, who ultimately finished 12th, had let the Finn gain track position ahead of their final Q2 runs but later caught his car, a situation he feels cost him around one and a half tenths, with the gap to the shootout sitting at 0.038 seconds.

"On my fastest lap, I lost a tenth and a half behind Kimi in Turns 11 and 12," said Button. "It's quite frustrating: they're pretty quick corners, and, when you're that close to the car in front, it damages your lap. It's difficult – because most of those corners are blind – but we've all got radios, so we should all know where other drivers are.

"It’s a pity: without that delay, I'm pretty sure I would've qualified inside the top 10."

The Briton is remaining upbeat ahead of tomorrow's Grand Prix, however, explaining: "There are positives – we've got new tires for the race; Turns 1, Three and Four are always very interesting on the first lap; and we've got interesting straight-line-speed compared to our rivals so the first couple of laps should be really interesting for us."

Sergio Perez edged ahead of Button in the sister McLaren to claim 11th on the grid.

Raikkonen rues mistakes on Q3 lap
Lotus driver Kimi Raikkonen was left to rue a sloppy lap in the final qualifying phase at the Korea International Circuit on Saturday afternoon, an effort that left him 10th on the starting grid before the application of Red Bull rival Mark Webber's 10-place penalty.

The Finn, who started his sole attempt in the closing stages of the session, had shown encouraging pace through the first sector of the lap but suffered lock-ups at Turns 10 and 12, leaving him over four tenths of a second behind his closest rival.

"I made a mistake so I knew the lap was gone. That's the way it goes sometimes." said Raikkonen, whose team has reintroduced its longer wheelbase chassis for the Korean weekend. "I expect that we will be a bit better tomorrow, better than the last race, where I was struggling with the front-end of the car for the whole weekend."

Romain Grosjean enjoyed a smoother run to fourth position in the sister Lotus, and the Frenchman is now elevated to third following Webber's aforementioned grid drop.

"It was very good to be P4," he said. "Gaining a position is not the way you would like it to be, but rules are rules and it is positive to start from the clean side of the track."

Bianchi penalized for di Resta block
Jules Bianchi has been penalized and reprimanded by the Korean GP stewards after the panel deemed that the Frenchman blocked Paul di Resta during qualifying.

Di Resta voiced his anger over the radio after following Bianchi's Marussia through the last sector of his final Q1 attempt. Despite this, the Force India driver progressed to the second phase, but the stewards later chose to hand out a punishment.

"The driver of car #22 [Bianchi] (on an out-lap) was given a radio warning of the approach of car #14 [di Resta] (on a fast lap) but decided to stay on line to start his own flying lap," read a statement issued by the stewards. "The stewards consider that car #22 could have safely allowed car #14 to pass before starting his flying lap."

Bianchi now drops behind team-mate Max Chilton to the back of the starting grid.