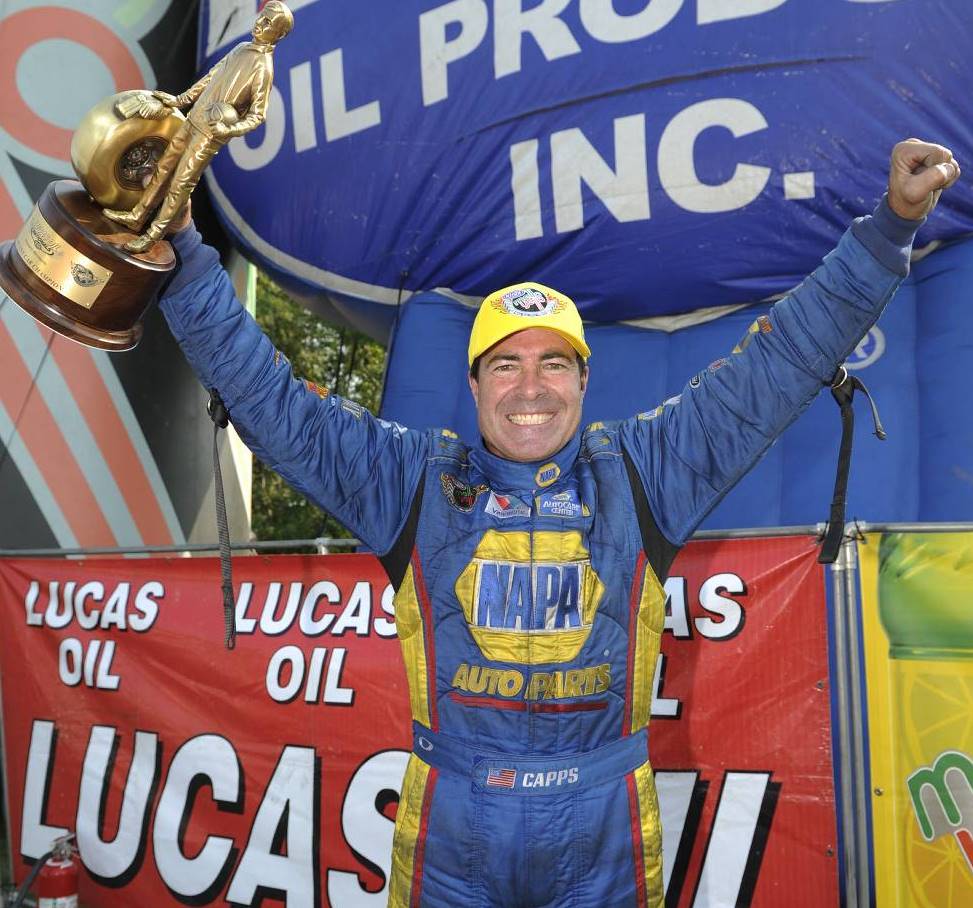 Ron Capps earned his third Funny Car win of the season by racing to the victory Sunday at the Lucas Oil NHRA Nationals at Brainerd International Raceway over teammate and points leader Matt Hagan.

Capps defeated his Don Schumacher Racing partner Hagan with a run of 4.063 seconds at 312.28 mph to the losing pass of 4.095 at 312.78 in the tightly contested championship round. Capps rebounded to win for the 41st time in his career after failing to qualify for the previous event in Seattle. His team also overcame an engine explosion during qualifying on Saturday in Brainerd that forced the team to use a backup Funny Car body for eliminations.

“That is the nature of our sport and for sure the Funny Car division," said Capps who earned the 11th Funny Car win by Don Schumacher Racing in 2013. “It is a fun class but that final round just epitomizes how tight our category is right now. You have to be on your absolute best and I wasn’t today as a driver but Rah [Tobler, crew chief] made up for it and man, wow, what a weekend."

With the win, Capps was able to secure his entry into the Funny Car field for the Countdown to the Championship, also moving to second in the points standings. Capps joined Hagan, who was previously qualified for the six-race playoffs, as well as Johnny Gray, Cruz Pedregon, John and Courtney Force as drivers who all earned berths during the Lucas Oil NHRA Nationals.

Massey piloted dragster to a fourth win this season in Top Fuel when he powered to the victory over Clay Millican. The win for Massey, who moved to second in points, was well deserved after an engine fire in the first round of eliminations forced the team to replace many components on the car prior to the second round.

Massey overcame the difficulties and in the finals posted a winning pass of 3.811 at 322.11 to Millican’s 3.856 at 320.66, giving Massey his first career NHRA Mello Yello Drag Racing Series win at Brainerd International Raceway.

“We just hadn’t had any luck here," Massey said. “I won in Top Alcohol Dragster [1998], but this is a completely different category and I’ve always lost in the first round. I wanted to see that win light come on for the first time in Brainerd. I would’ve been happy no matter what happened in the second round because we got that round win, but we obviously wanted to keep going on."

With his run to the finals, Millican and his team were able to secure a position in the Countdown to the Championship along with GEICO/Lucas Oil dragster pilot Morgan Lucas.

In Pro Stock, points leader Edwards recorded his first win at Brainerd International Raceway and his fifth of the season with the victory over V. Gaines in the finals in his Chevy Camaro. Edwards defeated Gaines with a run of 6.629 at 208.68 to the trailing run of 6.665 at 208.84.

“Finally getting a win here is pretty special," Edwards stated. “I’m not sure, but I don’t think that I’ve ever gotten past the second round here before. We weren’t really that fast this weekend, but we managed to stick around, and I’m so proud of my guys because they really stepped it up. We had ignition problems during qualifying and really didn’t know if we had it fixed or not before today’s eliminations. We swapped ignition systems, engines, and we swapped everything. But it worked out, so we’re happy."

The field for the Pro Stock racers in the Countdown to the Championship was filled as Rodger Brogdon earned the final available position on Sunday.