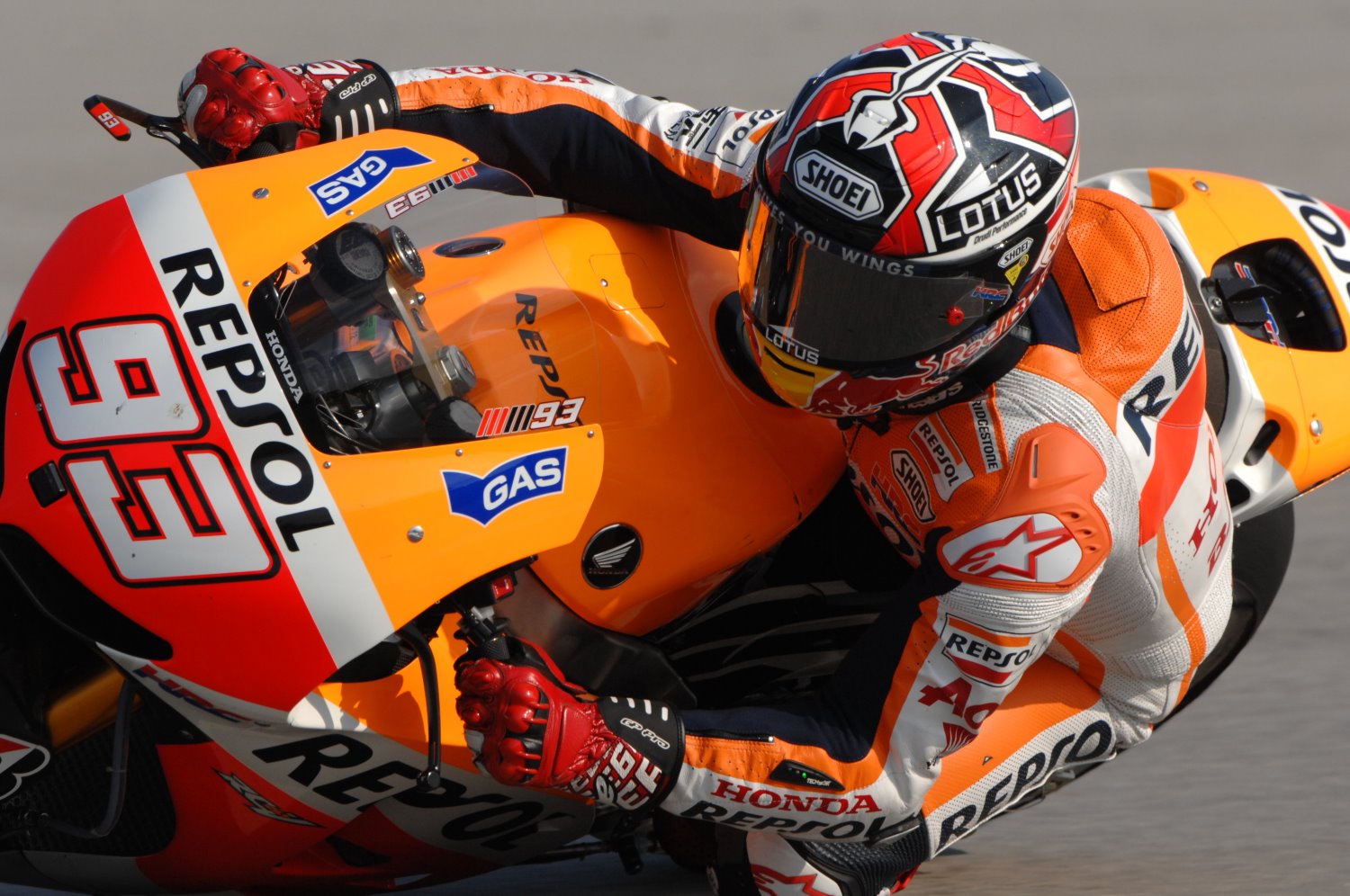 Marquez’s victory ensures that the Spaniard has topped every session he has taken part in this weekend – something not done since Casey Stoner dominated the Australian Grand Prix event of last year. The victory marks Marquez’s third consecutive premier class race win and confirms a clean sweep of American successes this season, having also triumphed at Texas and Laguna Seca.

From pole position, another poor start from the 20-year-old rookie saw Marquez fall behind both Lorenzo and teammate Pedrosa. He would overtake the pair on Laps 9 and 13, respectively, and – as his rivals continued to feel the effects of injured collarbones – would cross the finish line almost three and a half seconds ahead.

Pedrosa looked to be finishing the 27-lap race in third position, but sprang a surprise by slipstreaming ahead of Lorenzo at the start of the penultimate lap. For both Pedrosa and Lorenzo, this marked their first podium finishes since the Catalan Grand Prix in Barcelona some two months ago. In fourth place, Lorenzo’s teammate Rossi rose from ninth on the grid and only on the final tour got the better of Monster Yamaha Tech3’s Crutchlow and GO&FUN Honda Gresini’s Bautista, who had enjoyed a race-long battle. Stefan Bradl finished seventh for LCR Honda MotoGP.

Rounding out the top ten were Crutchlow’s teammate Bradley Smith and Ducati Team pairing Nicky Hayden and Andrea Dovizioso; the English debutant (who had run as high as fourth on Lap 1, thanks to a superb start) leapfrogged both of the red bikes as Hayden pushed Dovizioso wide at the final corner. This was a near repeat of a final-corner incident at Assen from which Smith also benefitted.

Marc Marquez
“I am very happy to have taken another 25 points! I knew before we came here that this would be a good opportunity and I was able to take advantage of it. I felt very good throughout the weekend, and I think this has been my best GP overall since coming into the premier class. I was first in every session, so I couldn't ask for more. In the race I decided to follow Lorenzo and Pedrosa, trying to save my tires at the start. When I saw that I was feeling good and had less fuel in the tank, I tried to attack. In the end I was able to break away and have some fun sliding the bike around and enjoying how good the ride was! Now we head back to Europe, where we will try to continue working in the same way and see how many points we can pick up"

Dani Pedrosa
"Today I gave all I had. I struggled to keep my energy up and I was forced to ride in a different way because of the pain I was suffering. It was a difficult race, because I was fighting a lot against the bike but in the end I was able to keep up my pace and take a good second place! In other conditions I'm sure we would have done better, but we did all that we could under the circumstances today and should draw that positive from the day"

Jorge Lorenzo 3rd
“I made a very good start and I had half a second advantage in the beginning of the race. I had a lot of hope because I knew I had a good pace but suddenly in the middle of the race Marc started to go faster and faster so it was impossible to win. I’m disappointed to not finish second, because in normal conditions without the drop in rear tyre this would have been possible. I’m happy to be back on the podium at a track that’s not normally a good one for us. I don’t feel perfect, I feel more tired than normal because I haven’t trained so much in the last two months because of the injuries. I felt tired at the end of the race and had some pain in the braking areas but I feel much better and in Brno and Silverstone I will be ok. I think from this moment we can only be better and better."

Valentino Rossi 4th
“At the end the race was not so bad, especially compared with yesterday and especially the second half. I could ride the bike in a good way and I could enjoy it. I did a very good lap time in the second half and had great battles with Bradl and Bautista, but especially with Cal on the last lap, that was very funny. Fourth place here is good considering this track is one of the worst for me and considering I started from ninth I am quite happy. We still have to work and understand why in the first laps I can’t ride the bike and use the extra grip of the tyre. In the second part when the tyre slides I can enter the corner faster, I can go faster and I can make good lap times so we have to improve because the first three riders are very strong."