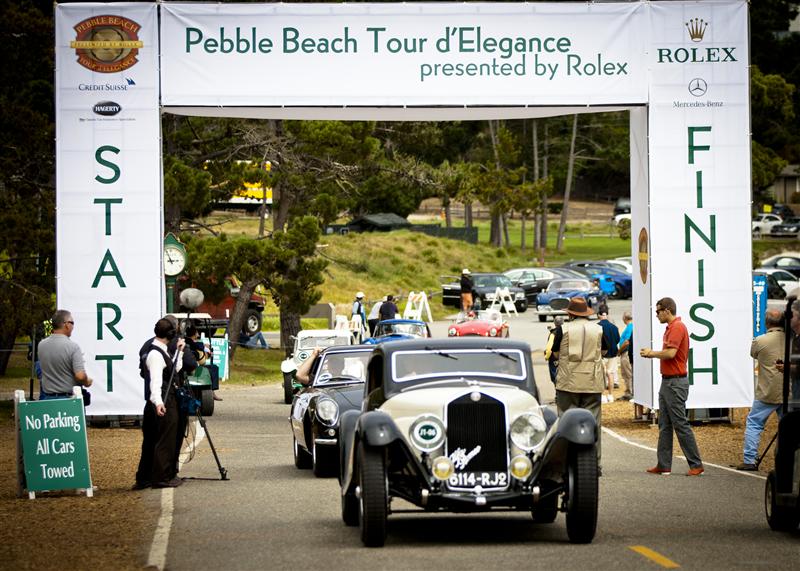 August is a special time of year on the Monterey Bay peninsula in California. This beautiful piece of coastline offers a magnificent setting for the extraordinary display of automotive design, technology and tradition that is formed by Monterey Classic Car Week. Considered as one of the world’s greatest automotive feasts, the week kicks off Thursday, August 15, with the Pebble Beach Tour d’Elegance presented by Rolex, and ends with the Pebble Beach Concours d’Elegance on Sunday August 18.

The Pebble Beach Tour d’Elegance presented by Rolex, which was instituted in 1998 with Rolex becoming Title Sponsor in 2007, celebrates vehicles in motion. The cars participating in the Tour will line up on Thursday at Collins Field in Pebble Beach, before setting off at 08:00. The Tour route traces portions of the famed 17-Mile Drive through Pebble Beach resorts and even a section of Highway 1 from Carmel to Big Sur, with a pause around midday in the charming village of Carmel-by-the-Sea to allow spectators to get a close up view of the participants. For the first time in many years, the Tour d'Elegance will include a lap around the track at Mazda Raceway Laguna Seca. “It will be great to have Concours cars circling the historic raceway once again," says Tour d’Elegance Director Sean Jacobs. “I think many enthusiasts will enjoy the rare opportunity to see not only race cars but touring cars such as the Packards, Lincolns, and Duesenbergs navigating the tight turns of the track."

Created to highlight the early history of Pebble Beach and its strong ties to the automobile, the â€¨Pebble Beach Tour d'Elegance presented by Rolex acknowledges the region’s road races of the1950s. It is open to all entrants in the Concours d’Elegance and the events are directly linked: if two vehicles tie in class competition at the Concours, it is the one that has completed the Tour that takes the prize.

At its 63rd anniversary, the Pebble Beach Concours d’Elegance is one of the highlights of Monterey Classic Car Week, a celebration of true style and the ultimate test for precise restoration. Rolex has been Official Timepiece of the Concours and partner of The Lodge at Pebble Beach since 1997.

The Pebble Beach Concours d’Elegance is one of the most comprehensive car shows in the world, covering more than a hundred years of flair and development within the motoring sphere. Each year, on the third Sunday in August, around 260 prized examples of historic cars and motorcycles roll onto the famous 18th fairway of Pebble Beach Golf Links where they are subjected to admiring, but exacting scrutiny and inspection. "We're committed to showcasing the very best of the automotive world, past and present," said Sandra Button, Chairman of the Pebble Beach Concours d'Elegance. "We want to celebrate the whole of automotive history – and we're thrilled to be making history, too."

The classic show vehicles are judged for their historical accuracy, technical merit and style, but not for their speed – although one of the key criteria is that all cars must be drivable. Class winners at the Concours are automatically eligible for the prestigious title of Best of Show. Last year, the most talked-about award of the Concours went to a 1928 Mercedes-Benz 680S Saoutchik Torpedo.

Each year the Pebble Beach Concours d’Elegance focuses upon a selection of famous marques, and this year the field highlights include:
Lincoln – focusing on custom-bodied examples of one of America’s elite luxury cars
Simplex – one of the rarest early twentieth century marques of which just 48 are known to survive-
Vanvooren – originally licensed to build Weymann fabric-bodied cars, the French body fabricator went on to develop its own striking designs
Lamborghini – the marque’s 50th anniversary is celebrated with a display of one-off creations that embody the term “supercar"
Aston Martin – vehicles on show pay homage to the brand’s centennial and the 90th anniversary of the 24 Hours of Le Mans
Porsche 911 – recognizing the model’s 50th anniversary
BMW 507 – this car made its debut in 1955, and, just over 200 models survive
Alfa Romeo 8C – of the original 230 built between 1931 and 1939, a total of 110 remain, and nearly 30 will be on show; the largest recorded gathering ever
Motorcycles – for the fifth year, the Concours will include motorcycles, this year focusing on French manufacturers such as Motobecane, Koehler-Escoffier, Monotrace, Gnome et RhÃ´ne, Majestic and Peugeot.

Alongside the 260 historic automobiles competing for honors on the 18th fairway, more than 20 concept and new production cars will be exhibited on the practice putting green in front of The Lodge at Pebble Beach. Stars of the future contrasting nicely with those of the past.

The quest for excellence is clearly evident at all the events during Monterey Classic Car Week not only in the competing cars, but also among owners, drivers, judges, officials and even spectators. Sir Jackie Stewart, one of the most celebrated Formula 1 drivers of all time and Rolex Testimonee since 1969, will be present at Pebble Beach. A true “gentleman driver", Sir Jackie Stewart took part in 99 Formula 1 Grand Prix races, winning 27, securing three world championships (1969, 1971 and 1973) and finishing 43 times on the podium.

Rolex has been involved in Monterey Classic Car Week since 1997 and the event forms a significant part of its association with the cardinal elements of motor sport – endurance, speed and tradition.