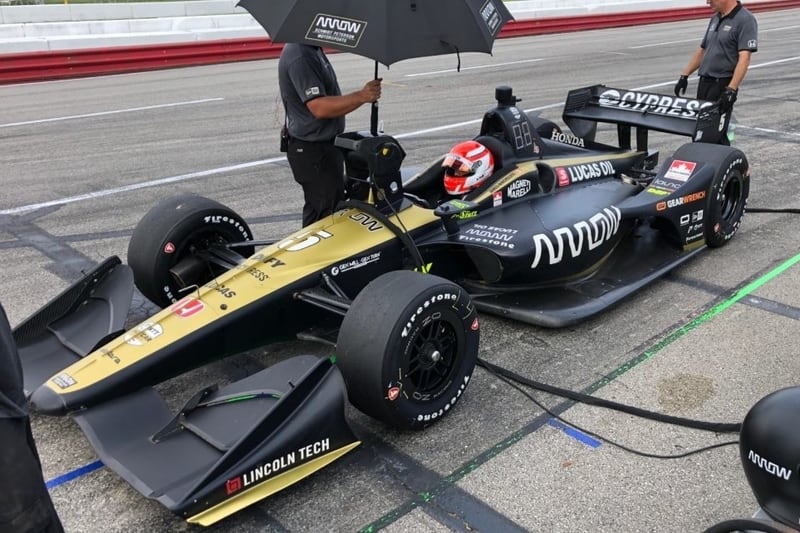 After taking part in his first-ever test in an NTT IndyCar Series car, reigning IMSA WeatherTech SportsCar Championship winner and ex-Formula 1 driver Felipe Nasr has spoken of how much he enjoyed the experience. Nasr took part in an evaluation test with Arrow Schmidt Peterson at the Mid-Ohio Sports Car Course on Monday.

It was announced last week that Nasr would be taking part in the test for Arrow Schmidt Peterson. Previous drivers who have taken part in the team’s annual test have included the likes of Robert Wickens and Marcus Ericsson, who both went on to drive for the team in the NTT IndyCar Series itself.

After finishing his day of running in James Hinchcliffe‘s #5 Honda, Nasr said in an interview with RACER that he was “very thankful" to the team for running him in the test and that he had been “smiling all the time" whilst he was on the track.

“I had a great day driving an IndyCar – does it get any better?" Nasr told RACER. “I’m very thankful for the opportunity, and I had a lot of fun. It’s been a while since I drove a single-seater; two or three years. I enjoy the feeling of the car. You can really attack the braking, attack the corner entry; the car has a ton of downforce and you have to hustle it the whole lap. It fit my driving style very well. I spent a long time out there in the car and I was smiling all the time.

“It was the day I had to learn the car, the tires, help the team with feedback," Nasr continued in his interview with RACER. “They [the team] had some things they wanted to try. We ticked some boxes with long runs, had me practice doing fuel-saving, and all I have to say is it was really good fun. I’m so thankful for the opportunity from Sam Schmidt and Ric Peterson. It was very different from the Cadillac prototypes!"

“We had the data references from the weekend with the black Firestone tires; they were very consistent over a full run," he said. “It was great to understand the techniques and to feel the air coming through my helmet again! And I liked working with the Arrow team a lot. It was a good spirit in all of them.

“All of the engineers involved with the test gave me great support, telling me what’s best to do in the car, how to extract the best from the tires, and they were very open to hearing about my likes to get the car close. They gave me great tools to get up to speed quickly. I’m leaving with a very good feeling."