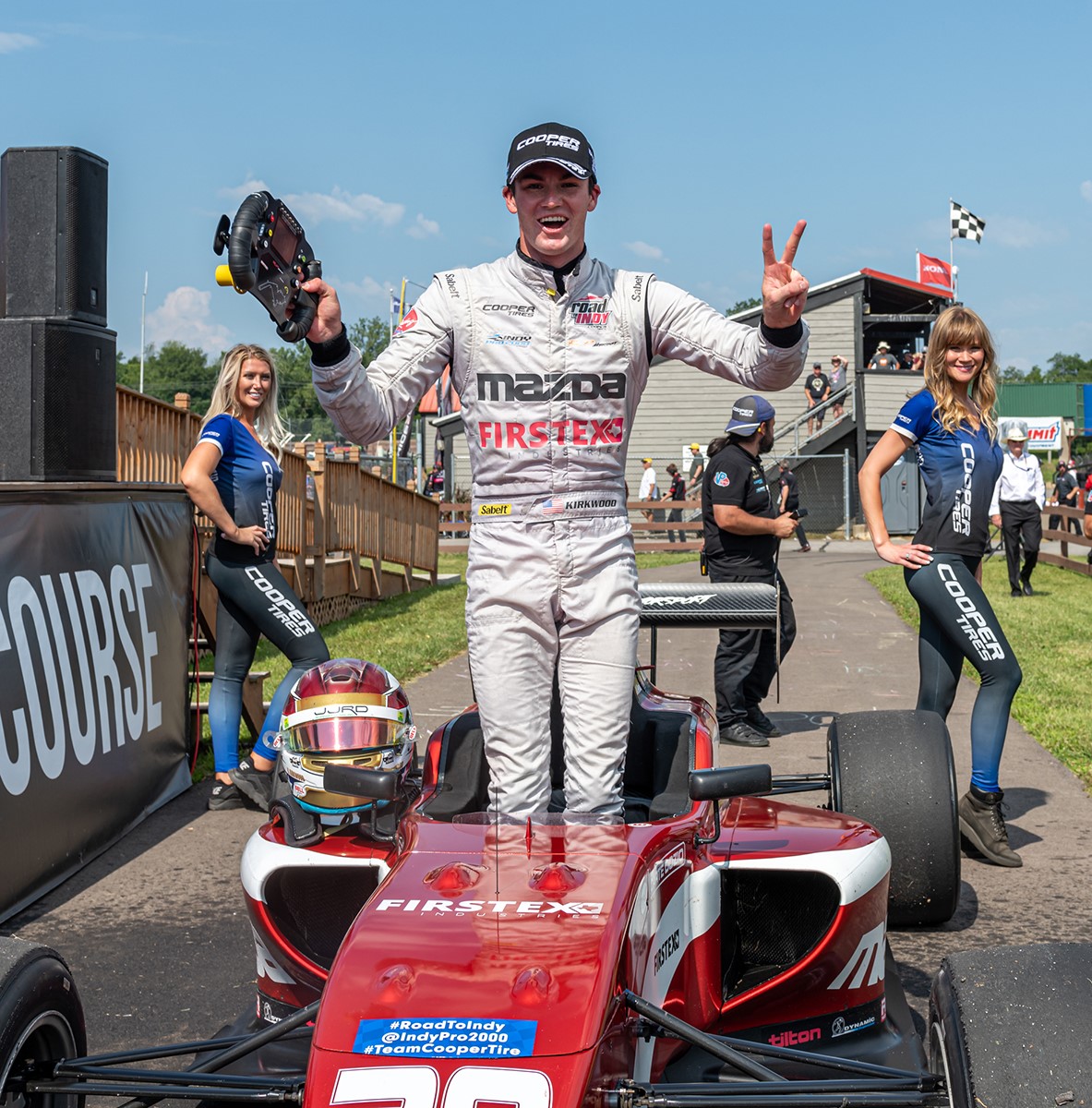 Another race at the Mid-Ohio Sports Car Course for Kyle Kirkwood and another race victory. The 20-year-old from Jupiter, Fla., doubled up on his performance from yesterday for the Italian-owned RP Motorsport USA team by sweeping the weekend and scoring his fifth victory from the last six races in the Indy Pro 2000 Championship Presented by Cooper Tires. He now lies only 13 points behind Rasmus Lindh with five races remaining in the quest for a scholarship valued at close to $600,000 to facilitate the graduation next year to Indy Lights Presented by Cooper Tires, the top step on the unique and highly acclaimed Road to Indy Presented by Cooper Tires open-wheel driver development ladder.

Juncos Racing teammates Sting Ray Robb, from Payette, Idaho, and Lindh, from Gothenburg, Sweden, completed the podium, with Robb coming out on top to equal his career best finish.

A midpack incident as the cars were all bunched closely together prior to the green flag caused Canadian Antoine Comeau, making his Road to Indy debut this weekend with the new Turn 3 Motorsport team owned by former series front-runner Peter Dempsey, to suffer a broken front wing and cause the start to be waved off. Title contender Danial Frost (Exclusive Autosport), who had qualified second, was adjudged guilty by the race stewards of failing to maintain a constant speed prior to the green flag and ordered to take the restart for the 25-lap race from the back of the field.

Kirkwood took off into the lead at the restart and controlled the proceedings, although Canadian Parker Thompson (Abel Motorsports) remained within a second and a half until another full-course caution was initiated after 19 laps due to a spin in Turn Nine for Mexico’s Moises de la Vara (DEForce Racing), who had run as high as sixth in the early stages

The final restart with three laps remaining saw Kirkwood once again confirm his superiority, pulling away to win by a comfortable 3.4783 seconds and secure yet another PFC Award for RP Motorsport USA as the winning team.

The battle behind saw Robb make a great jump when the green flag waved – enough to draw alongside Thompson on the run toward Turn One. Thompson attempted to brave it out on the high line but his resulting loss of momentum allowed Lindh also to sneak past into third. The trio took the checkered flag in that order, separated by just over a second. Lindh also earned the Tilton Hard Charger Award after moving his way from a disappointing sixth on the grid to third at the finish.

Guatemalan Ian Rodriguez secured another top-five finish for RP Motorsport USA, while the drive of the race was posted by Frost, who fought back from his penalty, made a series of incisive passes, and was rewarded with a hard-earned sixth position ahead of teammate Nikita Lastochkin, from Los Angeles, Calif.

Next on the calendar for the Indy Pro 2000 contenders is the second oval race of the season, at Worldwide Technology Raceway at Gateway in Madison, Ill., on August 24.

Kyle Kirkwood (#28 Mazda/Firstex Industries/Bell Helmets/Sabelt-RP Motorsports USA Tatuus PM-18): “I’m not going to have much emotion until we come to the final checkers of the year: as soon as this one was done, my mind went to what’s next. I have done well here, but a lot of that is knowledge, since I’ve tested and raced here so much. It’s one of my favorite tracks – it’s very technical compared to some of the other racetracks and with the changing asphalt and changing conditions, the grip changes dramatically. And whenever I’ve come here, I’ve had a really good car and today was no different. Today wasn’t as easy as yesterday, because I roasted my front tires early in the race and had to nurse the Cooper tires through the middle part of the race. The caution actually helped me to cool my tires and get back into a groove. We’re here to win races, that’s why we’re here. We have five races to go and anything can happen."

Sting Ray Robb (#2 Go Out Local/Big Idaho Potato Truck/OMP/Intervention.com-Juncos Racing Tatuus PM-18): “We’ve had a bad run recently, so it’s great to get back on the podium. I had a lot of good fights this weekend; I’m finally getting comfortable with the car. I feel as though I can put the car where I need it to be, and I’m where I need to be with race craft. I had gotten to that point in karting and now I feel as though I’m there now, in a car that is much bigger, faster and heavier."

Rasmus Lindh (#10 Chicago Pneumatic/PWR Junior Team/SKF-Juncos Racing Tatuus PM-18): “I felt that I was catching Sting Ray and Parker midway through the race but the aero wash is significant here, so I had a lot of understeer. I just hoped for a yellow flag and we got one. On the restart, Sting Ray made a good move on Parker going into Turn One and I got by going into Turn Two, which was good. This is one of the most difficult tracks we race on in terms of passing, because of the high-speed corners. I’m quite strong mentally, so I know what we have to do in the championship. We’ll push as much as we can to win and do everything we can to win."