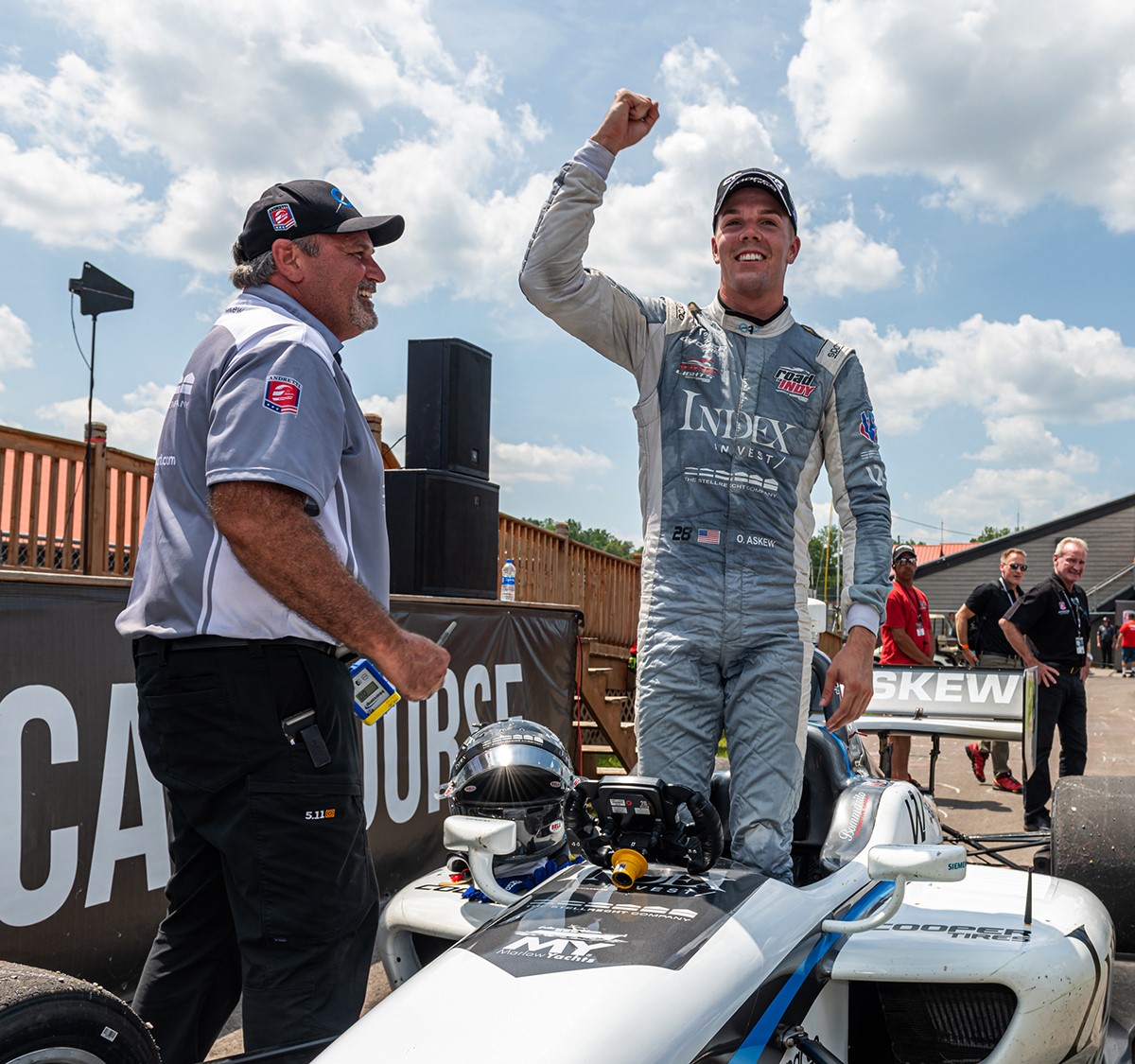 There’s no stopping Oliver Askew just now. Askew, 22, from Jupiter, Fla., celebrated the news he will soon test an Indy car for the first time by dominating the Indy Lights Presented by Cooper Tires field this weekend at Mid-Ohio Sports Car Course. Askew not only won both 30-lap races from the pole position for Andretti Autosport, he was never headed on the race track and capped an impressive performance by posting the fastest lap of the race – without the benefit of the AER turbo engine’s push-to-pass feature, which is available only to pursuing cars – on his final trip around the undulating and challenging 2.258-mile circuit.

The focus of this afternoon’s race, once again held in perfect summer weather in front of a bumper crowd in advance of the Honda Indy 200 NTT IndyCar Series headline event, instead was on the battle for second.

Englishman Toby Sowery (BN Racing/Team Pelfrey) couldn’t match Askew’s pace, especially in the second half of the race, but he just managed to fend off the attentions of Askew’s primary title rival, Rinus VeeKay (Juncos Racing), after a race-long battle.

Askew laid down a marker to the field yesterday, winning the opening race of the weekend and ensuring himself of pole position for Race Two by posting a new record qualifying lap of 1:10.8079, an average speed of 114.801 mph. He duly led the field into Turn One at the start, although behind him there was drama as fourth and fifth-place qualifiers Robert Megennis (Andretti Autosport), from New York, N.Y., and Dalton Kellett (Juncos Racing), from Stouffville, Ont., Canada, barely touched wheels at the apex of the corner. The impact was nevertheless enough to pitch Kellett into a spin and cause both Megennis and a following Aaron Telitz (Belardi Auto Racing), from Birchwood, Wis., to run wide through the grass and gravel.

After a brief full-course caution, Askew took off into the lead and then took advantage of a tight scrap behind him between VeeKay, who started second, and Sowery to complete the first lap of green-flag racing a commanding 2.6 seconds clear.

Next time around, as Sowery made use of his push-to-pass feature to power past VeeKay on the main straight, Askew’s lead was extended to more than three seconds. He settled into a comfortable pace for a while, but as soon as he realized Sowery had closed almost to within range of the push-to-pass activation gap, 1.5 seconds, Askew put his head down once again and began to edge away. Askew’s string of impressively fast and consistent laps – plus his final flourish to reclaim fastest lap from VeeKay on the final tour – ensured he crossed the finish line a comfortable 5.2430 seconds clear.

VeeKay was unable to displace Sowery, despite an intense effort, but still finished well ahead of Ryan Norman (Andretti Autosport), from Aurora, Ohio. David Malukas (BN Racing), from Chicago, Ill., recorded his second top-five finish of the weekend and collected the Tilton Hard Charger Award. Next up was Telitz, who recovered from a second incident with Megennis immediately after the early restart to catch and pass Brazilian teammate Lucas Kohl in the closing stages.

Askew’s commanding weekend was the first time any single driver had swept both poles, race wins, fastest laps and led every lap since the introduction of the Dallara-AER IL-15 in 2015. Jack Harvey was the last man to accomplish the feat, also at Mid-Ohio, in 2014. Askew now leads VeeKay by 45 points, 349-304, as the contenders head next to Worldwide Technology Raceway at Gateway in Madison, Ill., for Round 14 out of 18 on August 24.

Oliver Askew
"The more time I spend with the team at Andretti Autosport and the more time I spend in this car, the more comfortable I get. Everybody else is in the position but I try to work harder than them. I can’t thank every one enough for giving me the opportunity to be here. Thank you to Invest Index, Stellrecht Company, Andretti Autosport, Bell Helmets, Sparco USA and everyone watching at the NBC Gold broadcast at home. I have such a great group of people behind me. That was a really great race and we had really good pace."

Toby Sowery
“The start was crazy, but that’s why qualifying is so important: the crashes happen behind you. It felt as though there was still dirt on the track or oil or something, the car was so loose early on. It was quite sketchy. When I got close to Rinus, he made a mistake and I was able to use the push-to-pass and get by quite nicely. After yesterday, you have the bit between your teeth but we didn’t have enough to get to Oliver. It’s been difficult at times this year, because every track is new to us and we spend the first session learning the track which puts us a bit behind, but we’d tested here so that helped. It’s good to come away from this weekend with a podium."

Rinus VeeKay
“P3 is not bad but not really what I wanted. The track was very consistent today so every lap, you had a completely different car. That was different. It was quite a challenge to get the car right. I struggled a lot with oversteer in the first few laps so it took a long time to get the power down on corner exit. Toby had a really good run on me – he didn’t quite make it the first time but got by before the braking zone the second time, and he was gone. But I found the grip and the whole balance of the car changed. We gained on Oliver together but he got away in the end. But we’ll focus forward and go for wins."