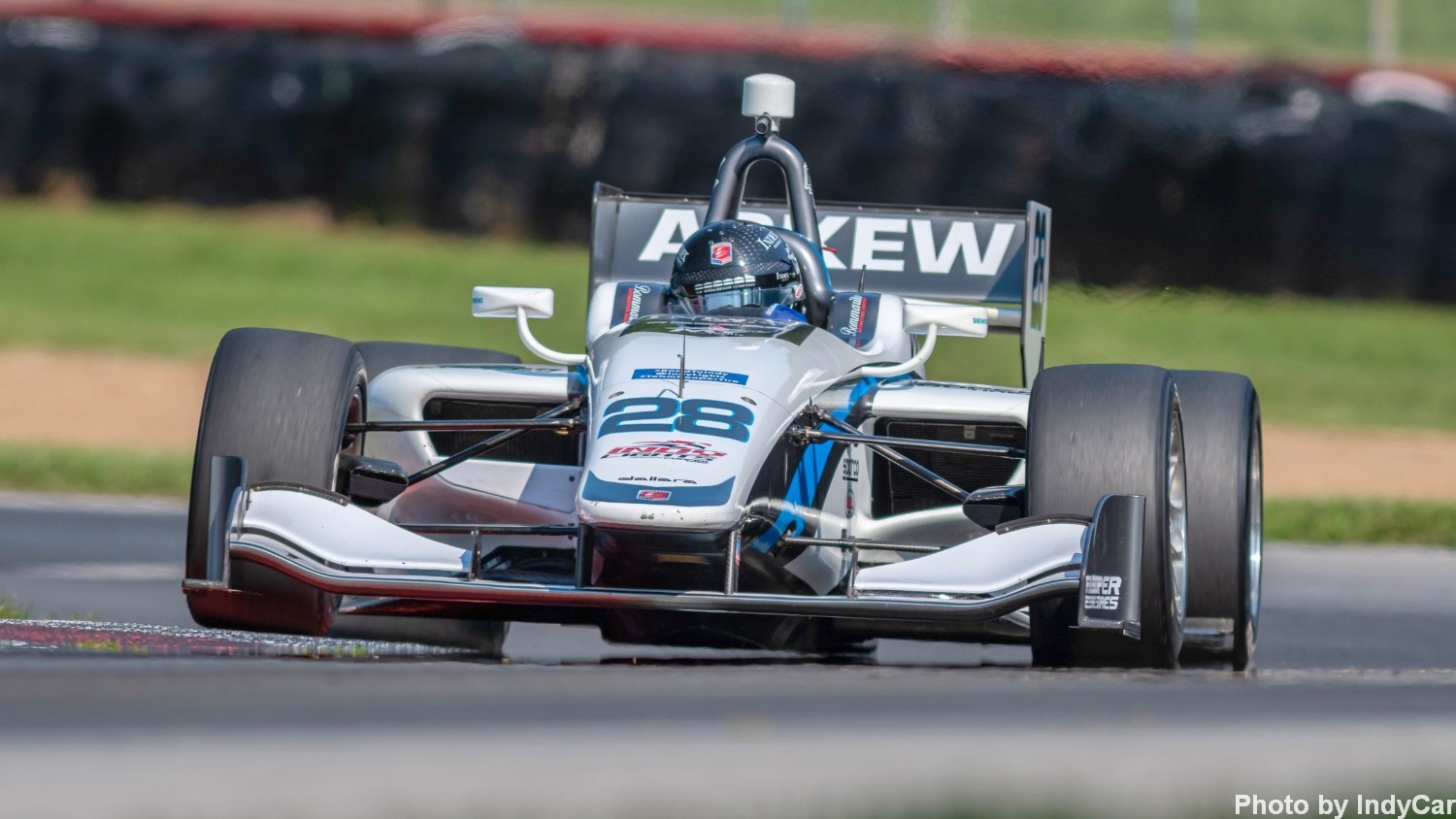 Oliver Askew extended his Indy Lights Presented by Cooper Tires points lead this afternoon with a commanding victory for Andretti Autosport at the Mid-Ohio Sports Car Course. The 22-year-old’s fifth win of the season from 12 races stretched his advantage to 35 points over Dutchman Rinus VeeKay (Juncos Racing), who finished third today behind Askew’s teammate, Ryan Norman, from nearby Aurora, Ohio. Six races remain this season.

After claiming the pole position in qualifying yesterday afternoon, Askew, from Jupiter, Fla., held off outside front row qualifier and teammate Robert Megennis, from New York, N.Y., at the first corner and was never seriously threatened throughout the 30-lap race held in warm conditions on the undulating and picturesque 2.258-mile road circuit.

A preceding Stadium Super Truck Series race made for a slippery track surface, especially during the opening stages of the race. Toronto race winner Aaron Telitz (Belardi Auto Racing), from Birchwood, Wis., was the first to be caught out, spinning at the exit of Turn Five on the opening lap. Next time around, third-place runner Toby Sowery, from Cambridge, England, looped his BN Racing/Team Pelfrey Dallara-AER in Turn Nine, and then Canadian Dalton Kellett ran off the road on the exit of the final corner, Turn 14. All three resumed at the back of the pack.

Megennis remained in contention, only 1.5 seconds in arrears of Askew with 10 laps completed, with Norman, having inherited third place from Sowery, also chasing gamely in third. VeeKay, meanwhile, after problems in qualifying caused him to line up only sixth on the grid, was up into fourth at this stage, albeit with a deficit of more than three seconds to the leading trio.

Sowery, who started third, had worked his way back up to fifth following his early gyration, only to lose control again as he crested the rise at Turn 11 on Lap 10, spinning off into the tire barriers. Sowery was unhurt but the full-course caution waved while his stricken car was retrieved.
Askew made an exemplary restart and soon began to pull away from Megennis, who was unable to shake off the attentions of Norman. On Lap 19, Norman took advantage of his AER turbo engine’s push-to-pass feature to power past Megennis on the main straightaway. Five laps later VeeKay attempted to follow suit, only for Megennis to hold his line through Turn Four, forcing VeeKay to the outside and, ultimately, to tuck back into line. Next time around, Megennis bowed to the inevitable as VeeKay completed his pass a little earlier on the straightaway and moved through neatly into third.

The Dutchman’s charge from sixth on the grid earned him his third Tilton Hard Charger Award of the season.

Megennis slipped back to a distant and lonely fourth at the finish, well clear of David Malukas (BN Racing), from Chicago, Ill., and Brazilian Lucas Kohl (Belardi Auto Racing), who kept his nose clean to secure his best finish of the season thus far.

Askew’s perfect day also included posting a new lap record of 1:10.8079 (114.801 mph) during a second qualifying session to secure the pole position for tomorrow’s 13th round of the championship, for which the green flag will fly at 12:50 p.m. EDT.

Oliver Askew (#28 Index Invest Dallara-Andretti Autosport Dallara-AER IL-15): “I feel as though I’m in a mode right now. I was super-happy to win but the job is not done. We have a lot of races to go and we have to keep our heads down. Rinus and I are always going to be on the podium together so it’s important to win every race. We were quick in the test last week so it’s down to me and the team to execute in qualifying, which we did this weekend. I’m so proud of everyone at Andretti Autosport for giving me such a quick car. We’ve been fast here (at Mid-Ohio) the past few years, especially last year with Pato (O’Ward) and Colton (Herta) and Ryan (Norman) sweeping the podium. Maybe we can sweep tomorrow, but for me and my camp, the goal is to execute and win as many races as possible. We’re the only car starting on new tires tomorrow so we should be good."

Ryan Norman (#48 Three Chord Dallara-Andretti Autosport Dallara-AER IL-15): “It’s a relief to be back on the podium and great to do it here. I was thinking about going two wide into Turn Four but thought better of it: I did that last year and it didn’t end up well for us. I knew I had the speed and just had to time it perfectly. I used up the front tires trying to catch Oliver toward the end but props to him for the win; we’ll try to do one better tomorrow. But I have over 50 family and friends here and they were all over in Turn Four, and I could see them on the pace lap, all waving at me. It’s awesome to have that support here, with my family, friends and my girlfriend and her family. To get a podium in front of them is great."

Rinus VeeKay (#21 Mazda/Jumbo Supermarkets/La Place Restaurants/KNAF Talent First-Juncos Racing Dallara-AER IL-15): “We ran after the (Stadium) trucks and obviously they don’t run our line, so instead of keeping it clean or putting rubber down, they put dirt down. That was something different. I struggled a bit with cold tires but by the fourth or fifth lap I could really go. I had a good fight with Megennis; I had push-to-pass and he wasn’t close enough to use it. He tried to put me in the grass but I saw it coming, backed off and did it over again the next lap. Once I got by, the team told me ‘you can still do it’ but I was too far from Ryan; I needed two more laps. But it was a good recovery from my qualifying position, another podium and points. I’m on the front row tomorrow and if I have the same speed, I can fight."