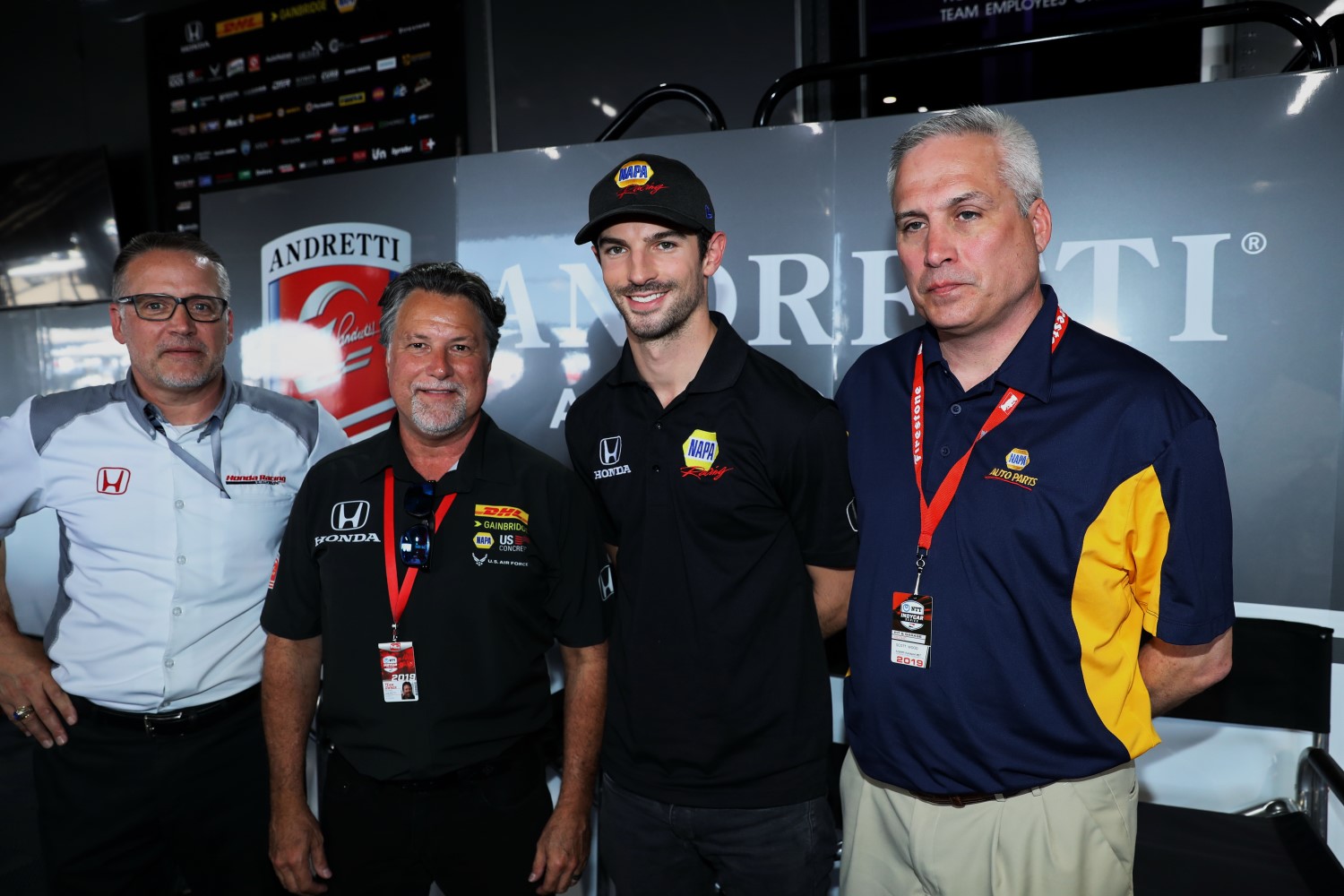 UPDATE This article has been updated below.

07/27/19 It was just announced to us media members here at Mid-Ohio that Alexander Rossi has re-signed with Andretti Autosport and Honda for 2020 in a 3-year deal, plus an option year.

NAPA will be his sponsor for 9 races and AutoNation for 7 races.

"It feels good to continue with Andretti Autosport," Rossi said. "Over the past four years we've built a very strong team with great chemistry, and I believe that we have the tools necessary to win races and championships.

"I'm looking forward to not just calling this my team but my home in the IndyCar Series.

"Michael Andretti, J-F Thormann, [Andretti Autosport President], Doug Bresnahan [Andretti Autosport chief marketing officer] and the entire team have been working very hard to put all the pieces of this deal together, and it's definitely a relief to have the future settled and be able to focus on the championship fight ahead of us."

"Andretti Autosport is unquestionably one of the premier teams in the NTT IndyCar Series, and we are gratified to earn their confidence for the foreseeable future.

"At HPD, our first goal every season is winning the Indianapolis 500, and Andretti Autosport has won more 500s for Honda than any other team.

"That said, HPD is fortunate to work with multiple high-caliber racing organizations.

"This commitment from Andretti Autosport strengthens our entire effort as we move into the next era of Indy car competition."

“We have a longstanding relationship of success with Honda and we’re happy to continue to build accolades together" Andretti said.

“All five of our Indy 500 wins have come under Honda power, and I’m looking forward to working with the entire HPD team to add to that count."

THE MODERATOR: Good afternoon. Thanks for joining us today.

Before we get started, I'll give a quick introduction. Closest to me, Scott Wood, sales manager for NAPA Auto Parts. This next gentleman, you maybe recognize, Alexander Rossi, driver of the No. 27 Honda. Michael Andretti, chairman and CEO of Andretti Autosport. And Ted Klaus, president of Honda Performance Development.

As you may have seen on social media, we're here today to officially let you know that Silly Season is over, to proudly announce that Alexander Rossi will be returning to Andretti Autosport for the 2020 season and beyond.

The No. 27 car will take on a co-primary sponsorship between NAPA Auto Parts and AutoNation, two long-term sponsors of Andretti Autosport.

Along with this, we're really proud to confirm for everybody that Andretti Autosport will continue to compete under Honda power for 2020 and beyond.

Alex, with that we'll dive right in with you. You joined Andretti Autosport in 2016. It became a bit of a whirlwind season, winning the Indy 500. You've grown into a strong career of the race wins, fighting for the championship. What does it mean to you to be able to return to Andretti with two such strong partners?

ALEXANDER ROSSI: It means everything. At the end of the day when all this started, Andretti Autosport and Honda, we all have the same intentions, the same outlook. It was just a matter of finding a way to put all the pieces together and make it work for everyone.

There's a lot of different factors that go into these decisions. It had to come together in the right way. It wouldn't have been possible obviously without Michael and his team, JF and Doug Bresnahan, NAPA Auto Parts, AutoNation and Honda.

It's been an amazing season to be able to talk about the huge amount of trust in relationships. That's really what made this decision what it is. This is home for me. This is the team I know. Michael gave me the opportunity in 2016 when I was an unknown to this series and really North American racing.

What we've been able to grow through and accomplish in three and a half going on four years is sensational. I think we're only going to get stronger, we're only going to get better. The partnerships and commitments we have from Honda, NAPA, AutoNation are going to allow us to do this. We have big plans ahead. It's all going to start here this weekend.

THE MODERATOR: You're in the thick of a championship hunt. How does being able to get this news out there help you refocus on what you have to do this season?

ALEXANDER ROSSI: For me, it's all behind-the-scenes stuff. It's a really good thing for all the 27 boys, for the whole team to know that my confidence and my faith has always been in them.

I feel like that's a very mutual thing that we have. Trust, relationships, as I said earlier, are a huge part of this sport. Continuity is a really, really important thing that teams can build off of. You see results start to come when this flow of communication is at a level where it needs to be. I think we have that.

The fact this is all behind us, the fact that we can focus on the day-to-day, executing on the racetrack, is a very positive thing.

I'm very excited. I'm very thankful. I had a lot of really strong support through this whole process from my family, from my father, manager specifically, who kind of kept me focused on being able to do my job on the racetrack throughout this process, could trust that the off-track stuff was going to be handled.

We make a great team. Couldn't do without all the people that are in my corner.

THE MODERATOR: We're looking forward to seeing you in the blue and yellow of NAPA as well as the pink of AutoNation as part of their Drive Pink campaign to raise awareness for cancer.

Scott, we'll slide over to you. Can you share some insights for us on how NAPA uses this IndyCar platform to build customer relationships and sales promotions?

SCOTT WOOD: Sure. It's been actually really nice having a driver like Alexander that's been a good representative of our company. We use it a lot to help increase sales through our NAPA Auto Care dealers and through our NAPA stores, doing promotions to help drive sales to give them the opportunity to be out here tomorrow to watch Alex try to repeat.

With the two-seater rides, miscellaneous things like that, it's actually been really good. When he does well, customers tend to blow up our phones telling us how good it is. The way he carries himself, as I said, a great representation of our brand, so…

THE MODERATOR: Ted, Andretti Autosport and Honda have had a lot of memorable moments together, including five Indianapolis 500 wins, more than any other Honda team relationship. Talk to us a little bit about that consistency for Honda, how it plays into the larger Honda family.

TED KLAUS: Yeah, so Honda is just so gratified to earn the confidence of Michael, the entire Andretti Autosport organization. By extension, Michael then takes care of, just like all our other teams, takes care of the amazing drivers.

I want you to realize that our amazing drivers, Alexander especially, they don't only show their skills on the track. If you could see them away from the track, how they drive performance for the whole team, it's really inspiring. We learn a lot from these drivers.

So thank you, again, Alex for having the trust, and Michael.

The word here is 'relationship'. Consistency of performance in life and on the racetrack comes from our deep relationships and our trust in each other. So many amazing people in the HPD family that provide not only the amazing Honda power, but we work together with the teams to improve their total winning performance.

Yeah, I'm really looking forward to earning that in 2020, working together for the foreseeable future. So thanks again, guys.

THE MODERATOR: Michael, with Alexander now confirmed to return in 2020, all four current Andretti Autosport IndyCar drivers will be returning for another season together. How important is that consistency in an overall program?

MICHAEL ANDRETTI: Well, I think it's great, for sure. We always talk about continuity. I think it's great that this will be a second year in a row that we're going into the year knowing that we have everybody that's been with us the last few years. So that's great.

But on the other side, I want to thank everybody. This was a big deal to put together. When you have so many different partners that have to make it work, you have Honda, starts with Honda, you have AutoNation, you have NAPA, then you have this guys. Trying to put all that together is a lot of work.

Doug Bresnahan has put in many hours to make that happen. JF, as well. I want to thank them for the effort they put into it. I want to thank our partners for working together to help make this happen, to be able to announce this today.

There's another person I want to thank, is Ryan Hunter-Reay for making the initial introductions to AutoNation, bringing AutoNation into our family. They've been a great supporter. Now for them to extend to become co-sponsor with Alex, it's awesome. It couldn't have happened without Hunter-Reay.

MICHAEL ANDRETTI: I think Ted said, it's relationships. It's building great relationships. I think we've been able to do that where we don't consider them sponsors, we consider them partners and part of our family. That's just the way we feel about everybody that's involved with this team. It starts to feel like a family atmosphere. I think that has a lot to do with it.

On top of it, we work very, very hard. We have great people helping to answer whatever questions come up so our partners get what they need to get out of the program. That's very important.

We have to deliver not only on the track, but off the track. I think we have a great staff that does that.

THE MODERATOR: Fantastic. Thank you all for joining us today.