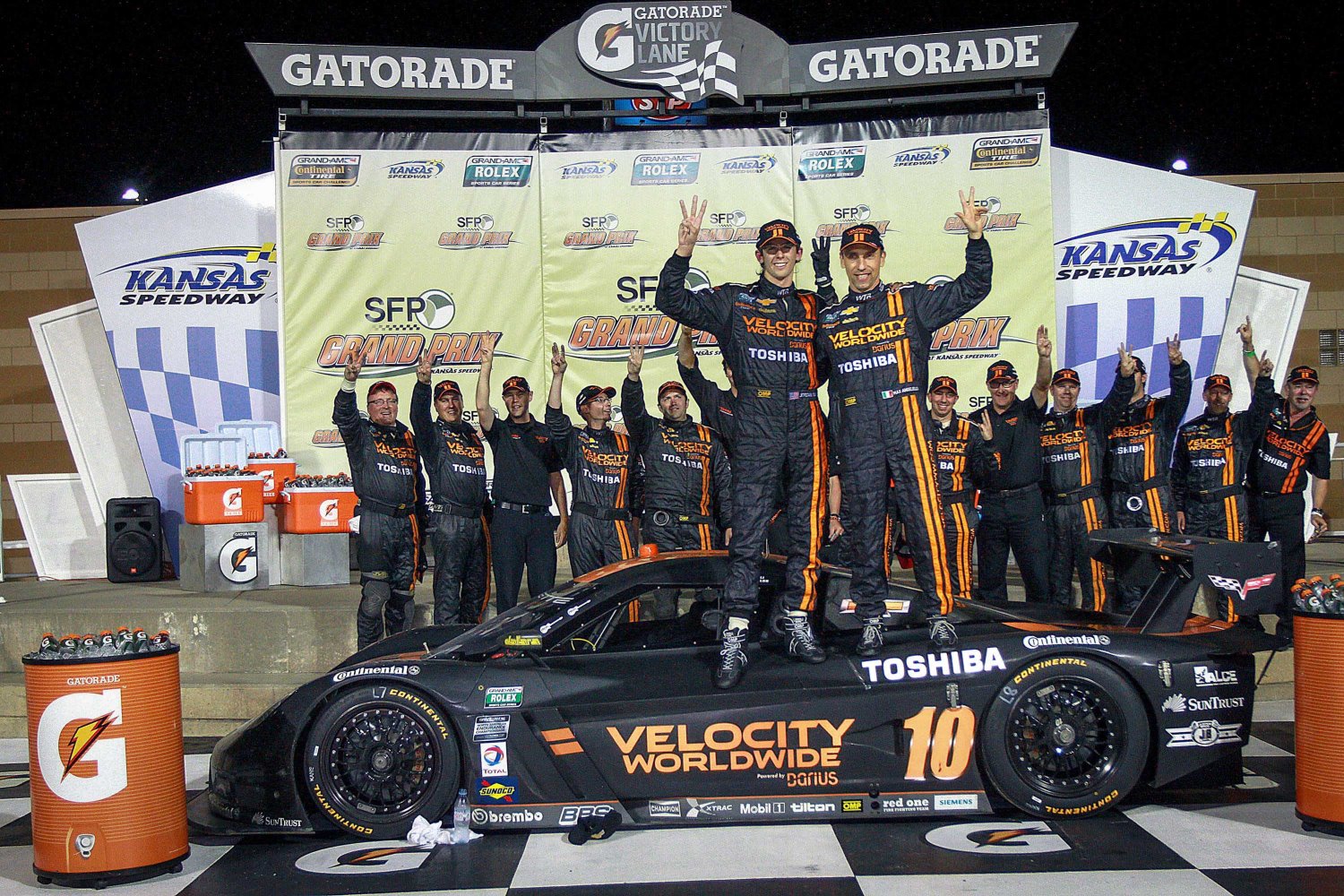 Jordan Taylor and Max Angelelli came away winners Saturday night in the GRAND-AM Rolex Sports Car Series in more ways than one. The Wayne Taylor Racing duo won the inaugural SFP Grand Prix at Kansas Speedway in their No. 10 Velocity Worldwide Corvette Daytona Prototype and regained the championship lead in the DP drivers’ standings in the process.

Jordan Taylor held off a stern challenge from Scott Pruett to win by 0.568 seconds. The son of team owner Wayne Taylor, driving the closing stint for the first time in a Daytona Prototype, kept Pruett behind him for the better part of an hour. Angelelli moved up from fifth at the start to third when he handed off to Taylor.

The third victory of the season for the Angelelli-Taylor pairing came with the extra bonus of now leading the drivers’ championship. Angelelli and Taylor lead Action Express Racing’s Christian Fittipaldi by two points, meaning Corvette DP drivers hold the top three spots in the championship with two races remaining.

The Wayne Taylor Racing entry made only three pit stops – the least amount of the DP field. After the team elected to short-fill on its first stop, Taylor moved into the lead for the first time midway through the race following the third and final caution period. The team called in Taylor for his final stop with 38 laps to and was the first of the lead cars to pit. That strategy proved to be the difference.

“Obviously, (Pruett) was in my mirror the whole time and the guys were telling me who it was," Taylor said. “It was a stressful two hours, I’d say. It was my first time finishing the race in the prototype class and Max was obviously great at the start. He gave me a great car. The guys had a perfect strategy. I think we were the only ones who did what we did and it worked out in the end. Everyone in this series is good – Pruett, Fittipaldi, (Joao) Barbosa, Max – all these guys can win races. To have people like that behind me for basically an hour and a half was stressful, but I knew I had a good car under me and I had all these guys supporting me. I wasn’t fazed at all. I’m just glad to beat one of the best."

The stage was set for the thrilling closing stretch when Taylor slipped past Pruett on lap 88 in the road course section as the field was completing a cycle of green-flag pit stops with just 40 minutes remaining on the race clock. Taylor inherited the lead three laps later when Will Nonnamaker in the No. 43 Team Sahlen BMW Riley was the last to pit. From there, Taylor made nary a misstep over the final 33 tours of the 2.37-mile circuit and drove like a seasoned veteran in keeping Pruett, 30 years his senior, behind him all the way to the checkered flag.

“I think this race was all about strategy and keeping the car up front," Taylor said. “The guys had the perfect strategy. We short-filled at the beginning and wanted to be the first ones to make the last stop. Max was flawless, the guys were flawless. It was just a great job for Velocity Worldwide. I think we went into the race thinking we had a third- or fourth-place car. But Brian (Pillar) and Adam (Banet) and the rest of the engineering department really did their homework and it paid off. The car was solid for the whole stint. We usually have tire-wear issues where it drops off a little bit. But the Continental tires were perfect and we could push for the entire two hours and 45 minutes and came away with the victory."

Taylor, typically the qualifying driver and sprint-race starter this season, took over from Angelelli at the 32-minute mark during the race’s first full-course caution. Angelelli, who started fifth, made his way up to third when the polesitting Rojas in the No. 01 Ganassi BMW was penalized for spinning race-leader Fittipaldi in the No. 5 Action Express Racing Corvette DP at the 15-minute mark.

Taylor resumed in second after a typically quick pit stop by the Velocity Worldwide crew and he stayed there until inheriting the lead for the first time when Barbosa pitted under caution in the No. 5 Action Express Corvette DP at the one-hour, 37-minute mark. He led the next 21 laps before pitting for a final time with 44 minutes to go, and was back in the lead for the final time just six laps later, shortly after his nifty pass of Pruett.

“It’s a great win. I’m very happy, pleased and honored," Angelelli said. “Jordan did something unbelievable by beating Pruett for the last hour, which is really something. It’s great that we won. We’re back in the championship lead. There are only two races to go, so, maybe."

While Angelelli and Taylor beat Pruett and Rojas on the racetrack, they also benefitted from a second consecutive race full of misfortunes for the No. 2 Starworks BMW Riley of Ryan Dalziel and Alex Popow, who spun on the opening lap, then smacked a concrete barrier at the 29-minute mark and finished 13th. The Starworks duo led Angelelli and Taylor by 12 points at the start of the day.

The No. 99 Gainsco/Bob Stallings Racing Corvette DP duo of Jon Fogarty and Alex Gurney, who started the day eight points ahead of Angelelli and Taylor, also suffered from late-race misfortunes and finished eighth.

“Max was great at the start and gave me a great car," Taylor said. “The guys had the perfect strategy, and we were the only ones to do what we did. So it worked out in the end."

The victory allowed Chevrolet to increase its lead in the engine manufacturers’ standings, and Wayne Taylor Racing moved from fifth to second in the team championship.

“Congratulations to everyone at Wayne Taylor Racing for a fantastic victory in the inaugural Rolex Sports Car Series event at Kansas City and reclaiming the Daytona Prototype drivers’ championship," said Jim Lutz, Chevrolet Program Manager for the Rolex Series. “This was an incredible challenge with a number of incidents that impacted many of the top runners. Max Angelelli and Jordan Taylor may not have had the fastest car on the circuit but the Wayne Taylor Racing team had the best strategy and made the fewest mistakes. In a series as competitive as this, those two factors are keys to winning races and championships."

JORDAN TAYLOR, NO. 10 WAYNE TAYLOR RACING CORVETTE DP
“It was a stressful two hours. It was my first time finishing a race in the DP class. To have someone like (Scott Pruett) behind me for an hour-and-a-half was stressful but I knew I had a good car behind me and had all these guys (on the team) supporting me so I wasn’t phased at all.

“We went into this race thinking we had a third- to fourth-place car. Our engineers did their homework and it paid off. The car was solid for the whole stint. We usually have tire wear issues where they drop off a little bit, but the Continentals were perfect and we could push for the whole race."

MAX ANGELELLI, NO. 10 WAYNE TAYLOR RACING CORVETTE DP
“Our Corvette was really good. Jordan did a fantastic job. It’s not easy to have Pruett behind you for over an hour. I’m very happy and very proud."