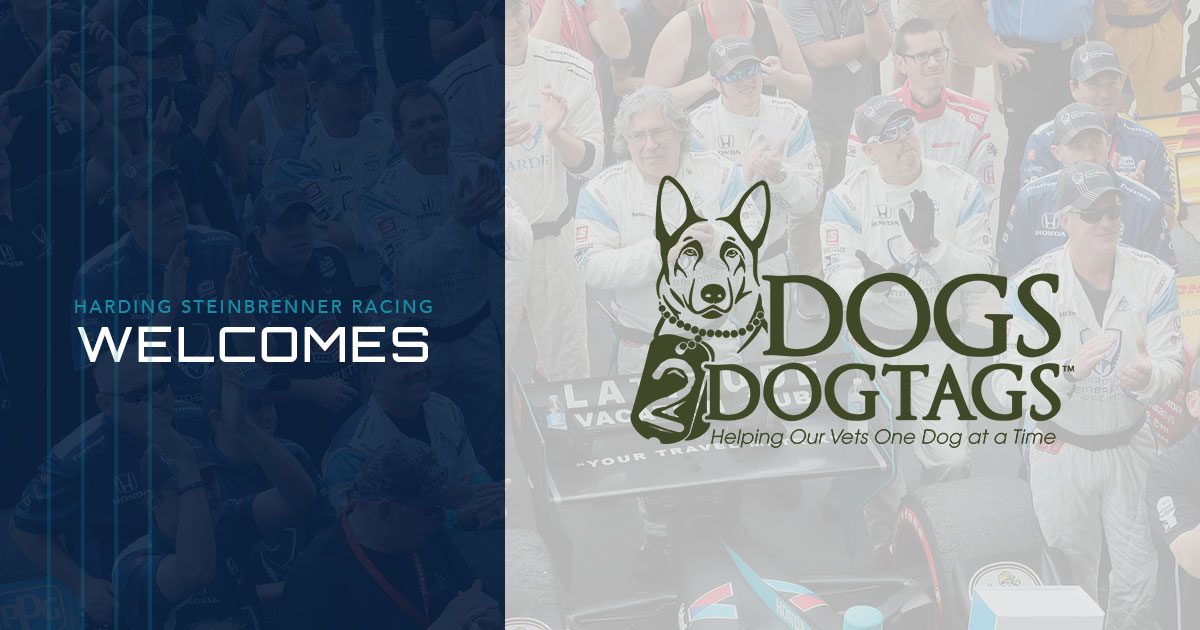 “The motorsport community has always been extremely supportive of Veterans," said Harding Steinbrenner Racing co-owner Mike Harding. “After our team met D2DT at Road America, we immediately decided that this partnership was perfect for our team and a great opportunity to connect with Veterans and give dogs a second chance for a great cause."

During his time with the 7th Marines as a civilian contractor, Torre Willadsen, D2DT Founder, developed close relationships with dogs and dog handlers. It was when now retired Corporal and dog handler, Chris Van Etten, was seriously wounded that Willadsen worked tirelessly to keep both Chris and his canine companion together. With his firsthand experience seeing the impact that dogs had on Veterans, he knew that he wanted to create an outlet for those struggling with PTSD to feel unconditionally supported.

“It’s inevitable that a soldier’s battle isn’t over when they come home," said Torre Willadsen. “Dog2DogTags is a dedicated service, at no cost, that trains shelter dogs so that they can assist in a Veteran’s therapy and provide companionship throughout their everyday life."

Harding Steinbrenner Racing and Dogs2DogTags will be activating their partnership at the Mid-Ohio Honda Indy 200 in Lexington, Ohio. Accompanying D2DT at the race will be Ohio-based, U.S. Navy Veteran Brian Jordan with his German Shepherd “Pup in Training", Morty, and Chris Van Etten, who serves as the D2DT spokesperson in addition to starring on General Hospital and modeling for Jockey.

“We are thrilled to partner with organizations like Dog2DogTags," said Harding Steinbrenner Racing co-owner George Steinbrenner IV. “They are truly making a difference in so many lives and having this opportunity to be involved with an organization like this makes us all humbled and eager to help them spread their message."

Dogs2DogTags is currently raising one million dollars for a new state of the art training facility to further train and shelter more dogs. A fundraising campaign has been launched in conjunction with the D2DT/ Harding Steinbrenner Racing partnership to help in reaching that goal. Motorsport community members, fans and those wanting to support are encouraged to text D2DTHSR to 44-321 to make a donation.

Dogs2DogTags provides significant treatment options to Veterans suffering from Post-Traumatic Stress Disorder (PTSD). Canine companionship can make a real difference in the fight against an incredibly high suicide rate among our veterans, while saving the lives of canines stuck in shelters. Interested in helping or donating? Visit dogs2dogtags.com.