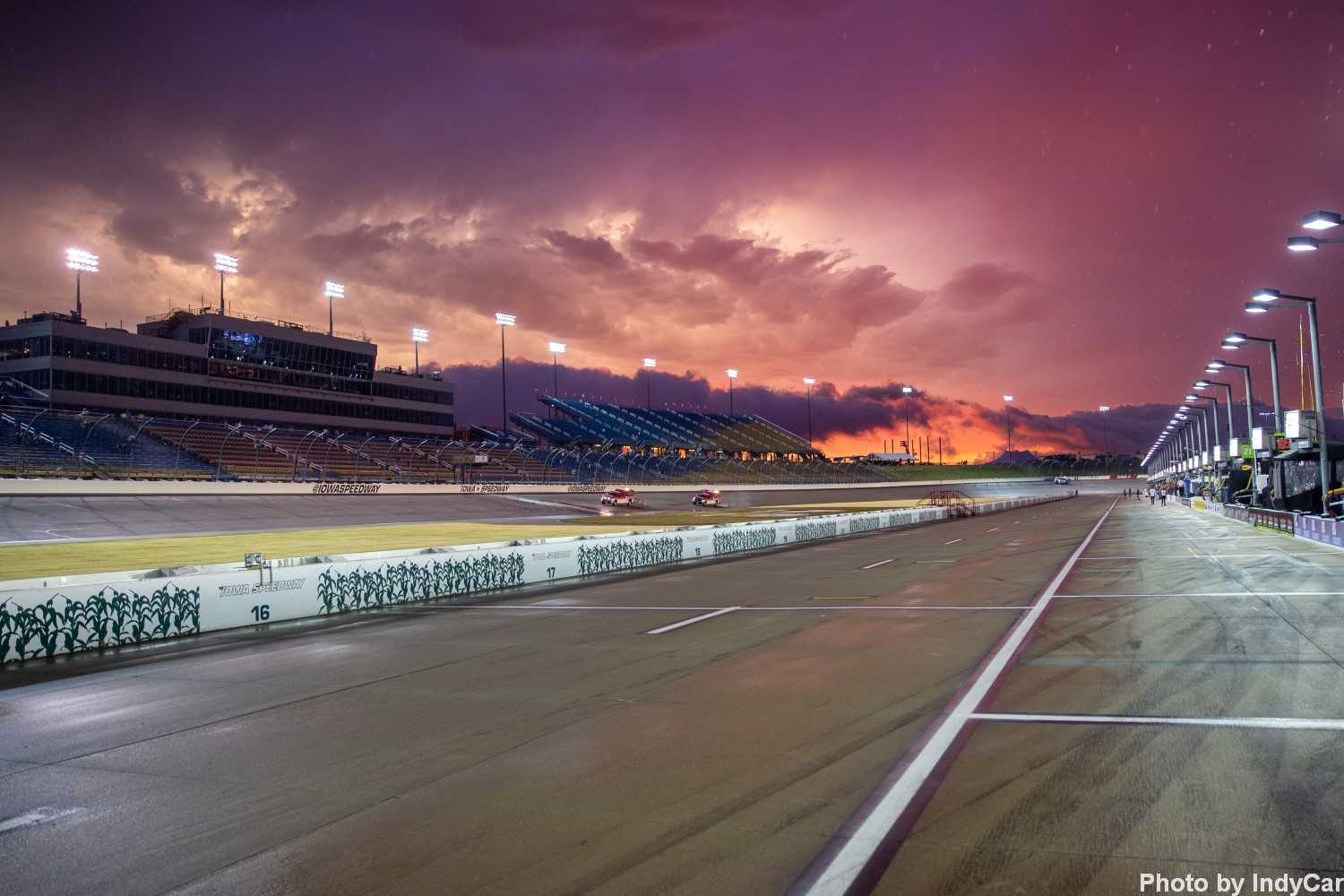 UPDATE The Titans and the safety trucks continue to work on the weepers between turns 3 and 4. IndyCar has announced the cars will grid at 9:55 pm. Race time has not been scheduled yet.

We are back on NBCSN live.

07/20/19 Lightning continues to light up the darkening sky. Three Titan dryers and the track safety trucks are out drying the track as the rain is still slightly falling. Weepers in turns 3 and 4 are a concern. The grandstands and the concession stands were opened around 8:30 pm. And the medical helicopter has returned to the track.

Unofficial word is 10:30 pm would be the latest the race could start tonight. If the track is not dried in time, the race would be run tomorrow.

07/20/19 The sky was gotten dark with clouds and the fans have been asked to proceed to their personal vehicles. The teams are waiting in their garages.

07/20/19 The fans are arriving at the track now. It is now windy and the clouds have blocked the hot sun.

The storms that are predicted have now moved to start around 8 pm.

07/20/19 It is a blistering, hot day here at the Iowa Speedway in Newton, Iowa. Weather is expected to remain in the low 90s with thunderstorms moving in later tonight. Not sure if or when the storms will arrive here but one weather app is saying 5 pm. It typically takes 50 minutes to dry this track with the Titans, if the rain is not heavy. But this track also has weepers if the rain is heavy. We will have weather update as the day unfolds.

Yesterday's IndyCar sessions were incident free. There were a few yellow flags for debris only during the two practice sessions. It was extremely hot in pit lane even during the 6 pm session, which is close to the actual race time. The track temperature was 115 degrees during the final practice, not as warm as the 135 degrees for qualifying. Although the drivers were commenting on how quickly the tires degraded, we did not see any unusual tire wear during the late practice session.

Josef Newgarden, the Team Penske driver who is leading the championship points heading into this race, was definitely not happy after his qualifying run. Most drivers would be happy with 3rd but Newgarden displayed some frustration. In the post qualifying press conference, he was short with his answers. When he was asked what he thought of the fact that no one has won this race from the pole, he abruptly answered, "I am not into stats". Is his French teammate's recent win streak getting to him?

Tony Kanaan, driver of the number 14 Foyt Racing entry, was not happy with this qualifying effort after running seventh fastest in the morning practice. But 13th was the Brazilian's best qualifying effort of the season. Kanaan won the race here in 2010 from 15th on the grid and finished on the podium from 2010 through 2014.

Kanaan commented on his qualifying run, "Frustrating. I think I could have been a little bit better. Obviously, the track had some oil dry and that's the price we pay when we qualify early. The track is only going to get better. The way you do the qualifying draw is by championship points and we didn't do ourselves any favors by being in the back. This is a track where I led over 500 laps in the course of my career and have a lot of podium finishes, so I'm hopeful this will be our turnaround weekend for sure."

Kanaan's teammate, Matteus Leist, driving the number 4 ABC Supply entry, has also had time on the podium here while he was in Indy Lights. Leist won the 2017 race.

Simon Pagenaud, the pole sitter for today's race, was asked about his thoughts for tire degradation during the race. "I think it's low downforce on the cars. We have a lot of power. It's a lot of fun. You really have to pedal the car. The juice of the tire only lasts one lap, which is what you expect with the level of downforce we have, which is really low. It's a very abrasive racetrack."

Stay tuned to AR1 today for updates as we get closer to race time.