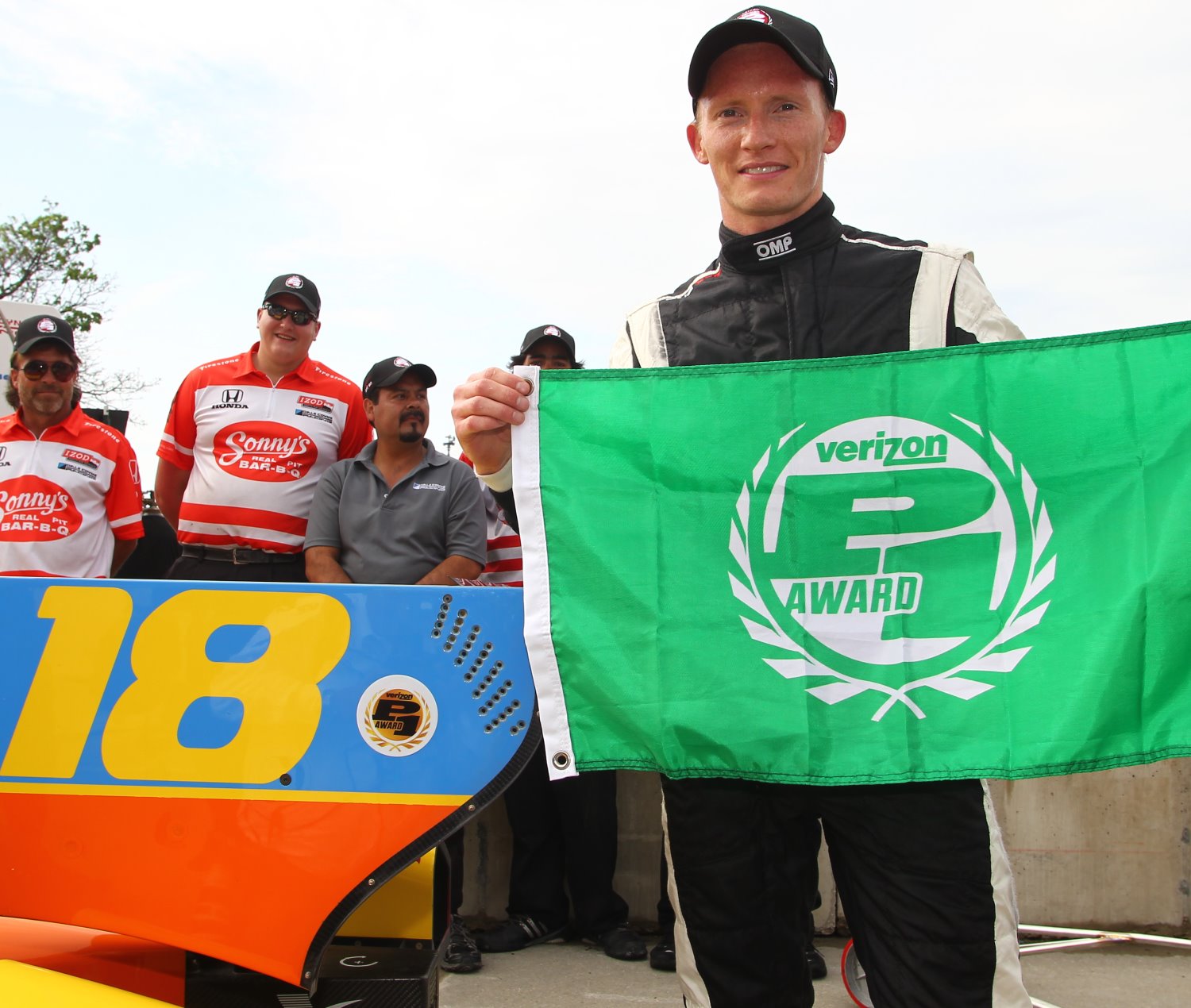 Mike Conway, in a one-off driving the No. 18 Sonny's car, earned his first IZOD IndyCar Series pole and gave Dale Coyne Racing its maiden series pole start in qualifications for the 70-lap race June 2. It's a pair of firsts for the second race of the Chevrolet Indy Dual in Detroit presented by Quicken Loans.

How good was Conway's lap? Will Power mentioned during the press conference that he was quite impressed with Conway's lap, and does not believe he could have turned a similar time with more laps.

Conway, who took over the seat after Ana Beatriz filled it for the initial five races of the season, recorded a quick lap of 1 minute, 18.0977 seconds with 55 seconds left in the 12-minute session on the 2.346-mile, 13-turn street course.

James Jakes posted the quickest lap in Group 1 (1:18.1704) in the No. 16 Acorn Stairlifts car for Rahal Letterman Lanigan Racing.

Jakes, who it should be noted seems to have something of a spring in his step, has repeatedly mentioned the past few days he loves the Belle Isle layout. While other drivers have complimented the redesign and improvements made to the track, Jakes genuinely seems to love the track. And while he didn't say so directly it seems he thought he could have bettered Mike Conway's pole time.

"We just had to hang out and see what we had and it was enough for pole," Conway said. "Excellent job by all the guys at the team at Dale Coyne for making this happen. We couldn’t have asked for much more coming into this weekend."

“This is great to get our first pole," Coyne said. “We have had many front-row performances, but I am thankful for Mike bringing us our first pole. Maybe a yellow Sonny’s car is good luck."

"I think we would have had a shot at pole if our session hadn't been cut short (by a red flag for the stalled car of Alex Tagliani between Turns 4-5 with 3:30 left in the session)," Jakes said. "In a way it's goof but it's still a little disappointing to miss out on pole. Going to have to find which hotel Conway is staying so I can high jack his room tonight. He keeps on spoiling the party. But no, congratulations to those guys they've been strong all weekend."

Dario Franchitti, who earned the pole for Race 1, will start 11th in the No. 10 Suave car for Target Chip Ganassi Racing because of an unapproved engine change carried over from the Indianapolis 500. Conway qualified third and will start second. Jakes qualified fourth and will start third.

A driver who sweeps the weekend races will receive the $50,000 SONAX Perfect Finish Award. If no one wins both races at Belle Isle, the prize fund carries over to Toronto in mid-July ($100,000). If no one wins both of those races, the Houston doubleheader in early October will be worth $150,000.

MIKE CONWAY (No. 18 Dale Coyne Racing Honda, Verizon P1 Award winner, Dual 2): “We just had to hang out and see what we had and it was enough for pole. Excellent job by all the guys at the team at Dale Coyne for making this happen. We’re really, really happy and can’t wait to see how it goes. (About his starting positions for both races): “We’ve got really good starting position, with second and first, and we couldn’t have asked for much more coming into this weekend. I was hoping I’d make the Fast Six, but to do it as well as we’ve done is amazing. So big credit to the team and my teammate for giving us a good car." (Does starting from pole in Dual 2 affect strategy for Dual 1?) “That all plays into hand, especially with the amount of reds and blacks we have, we’ve got loads of blacks but not many reds. But I think the black time will be better for us anyway, so I’m happy, and it’s going to be a tough race for sure. There are some quick guys around me, and I just have to focus on getting my head down and hopefully pull away, but we’ll see."

JAMES JAKES (No. 16 Acorn Stairlifts Honda, qualified second): “It was pretty good. It was short. It's a shame we didn't get a few more laps, actually. I think we would have had a shot at pole if our session hadn't been cut short. But yeah, the guys worked really hard. It's funny yesterday after qualifying the balance wasn't great so we made some adjustments to that and had a game plan this morning and it worked out well for us. But, like I said it's a shame we got cut short because actually if you look to the laps we only did three flat laps and if you look at the other groups three flat laps we were ahead by a half a second still. In a way it's goof but it's still a little disappointing to miss out on pole. Going to have to find which hotel [Mike] Conway is staying so I can high jack his room tonight. He keeps on spoiling the party. But no, congratulations to those guys they've been strong all weekend, as well. Obviously with the weather looking uncertain today and tomorrow it's nice to start up front." (On being a pleasant surprise): "I think you just to be patient right now in the series. This series is that competitive that if you are off your game by a tenth you fall massively backwards. There are 25 guys who can win a race, and I don't think there is any other championships where you can say that. It really is unique. IndyCar is a great product right now, and the depth of the drivers is fantastic. Everyone is pushing so hard and like I said if you are off your game you are going to go backwards so you really have to make sure that you are ticking all the boxes going into the weekend and if it doesn't go your way just stay patient and if you're doing everything you can do and it will come. But like I said yesterday, big thank to all the Penske Organization. The track is really fun to drive. It flows well. It's nice to go down to Turn 3, and hang a right. And then the next two corners, Turn 4 and Turn 5, are fun. And it's a real drivers track, you know. You really have to be on your game."