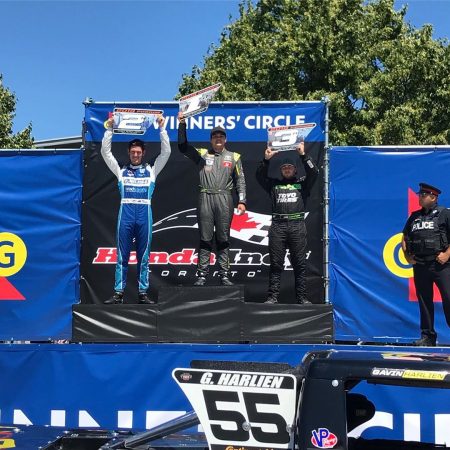 Matt Brabham braced the wild weather on Saturday to secure two podiums and the overall round win in Stadium SUPER Trucks this weekend in Toronto.

The Championship leader was the fastest qualifier, outclassing the field by more than a second.

The pole position saw Brabham start at the rear of the field for race one when the grid is inverted, but he bagged maximum points against his title defense in the session.

In a relatively clean weekend, Brabham’s prowess was on show as he was able to pick through the field and line up passes.

Usually waiting for the carnage to unfold and pounce on other’s mistakes, the 2018 Champion set about storming through the race with his eyes firmly on the top step of the podium in race one.

Brabham made his way to second when the weather hit and the race was red flagged with four laps to go. There was lightning reported and the race was eventually cancelled and full points were awarded.

While the weather had passed for this morning’s race two, it was a similar story for the third-generation racer.

The grid was decided on the weekend’s points tally and reversed, duly Brabham was sent to the rear of the field.

In another meteoric effort, Brabham set about a charge through the field eventually reaching second.

By the last lap Brabham was on the tail of race leader Gavin Harlien; Harlien put up a strong defense and denied the Australian-American a chance at a race win.

The second secured his overall round win and extended his 2019 championship lead.

It was a busy weekend for Brabham, steering the IndyCar two-seater, fulfilling TV commitments and performing driver coaching duties.

Stadium SUPER Trucks will join the IndyCar Series at Mid-Ohio for their next round, July 26-28.

What Matt had to say…
“The goal for the weekend was to bag a few points, which I was able to accomplish. Getting pole position, and the overall round win puts us in a good place for the championship," said Brabham.

“It was a surprisingly clean weekend, I had to genuinely set up passes and race hard to get to second. I was slower than usual getting through the field because I just had to pick my way through. No one really made any mistakes.

“Race two was similar to race one, it was also pretty clean. We were all just racing hard.

“The battle for the lead on the last lap was exciting, I wasn’t able to get past him, unfortunately. He was really good at defending."