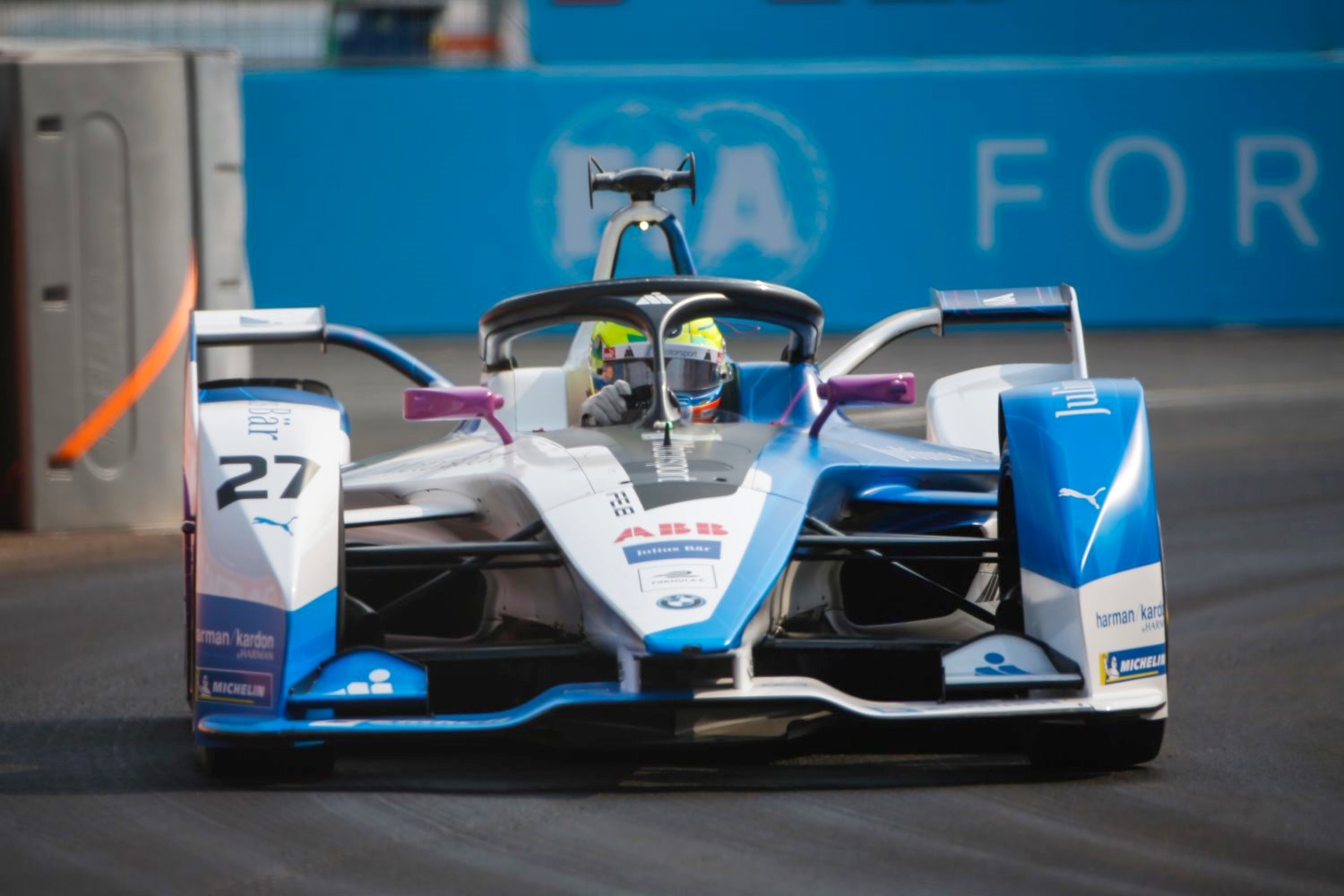 Buemi, who won Saturday's opening race, needed pole position to keep his slim title hopes alive and the Nissan e.dams driver was the first to hit the track in superpole.

Frijns's aggressive third sector, in which he clipped the inside of the Turn 14 wall, pushed him to provisional pole by 0.017s over Buemi and eliminated the Nissan driver from contention.

But Frijns then lost provisional pole when Sims put together a 1m09.617s lap that put him 0.095s clear.

Those improvements meant Buemi was shuffled to third on the grid ahead of Bird, Stoffel Vandoorne (HWA) and Daniel Abt (Audi).

Vandoorne's effort was compromised by a wide exit from the Turn 9 left-hander, while Abt struggled for grip through the final sector's quick-fire Turns 11, 12 and 13.

Buemi's team-mate Oliver Rowland qualified seventh after almost clashing with Sims when he weaved in front of the BMW on the run to Turn 1 before his full-power lap.

Mitch Evans had targeted pole position to keep his slim title hopes alive but, as a group one runner, he was only able to muster eighth on the grid for Jaguar Racing.

Evans needs to take the victory and the fastest lap in the New York decider, while also relying on setbacks for fellow group one qualifiers Jean-Eric Vergne and Lucas di Grassi, to take the title as he currently trails them by 25 and three points respectively.

Main title contenders Di Grassi and Vergne qualified in 11th and 12th, and the DS Techeetah driver holds a 22-point buffer over his Audi rival di Grassi heading into the finale.

HWA's Gary Paffett was ninth after NIO's Tom Dillmann bizarrely blocked him on the exit of the Turn 11 left-hander and compromised his run.

Venturi's Edoardo Mortara was 10th ahead of di Grassi, with Jose Maria Lopez in 13th behind Vergne.

Antonio Felix da Costa put his BMW 14th on the grid ahead of Oliver Turvey, Jerome D'Ambrosio and Dillmann.

Pascal Wehrlein was 18th and placed in front of Maximilian Gunther and DS Techeetah's Andre Lotterrer.

Jaguar's Alex Lynn was a dark horse for a superpole place after his form in Saturday's race, but a poor first sector resigned him to 21st on the grid.

Lynn, who retired from the opener while in contention for victory due to a suspected coolant-related problem, was due to take a 20-place grid drop for an MGU change.

That will place Lynn behind Venturi's Felipe Massa, who ran wide at Turn 5 and lost any chance of completing a competitive lap time.