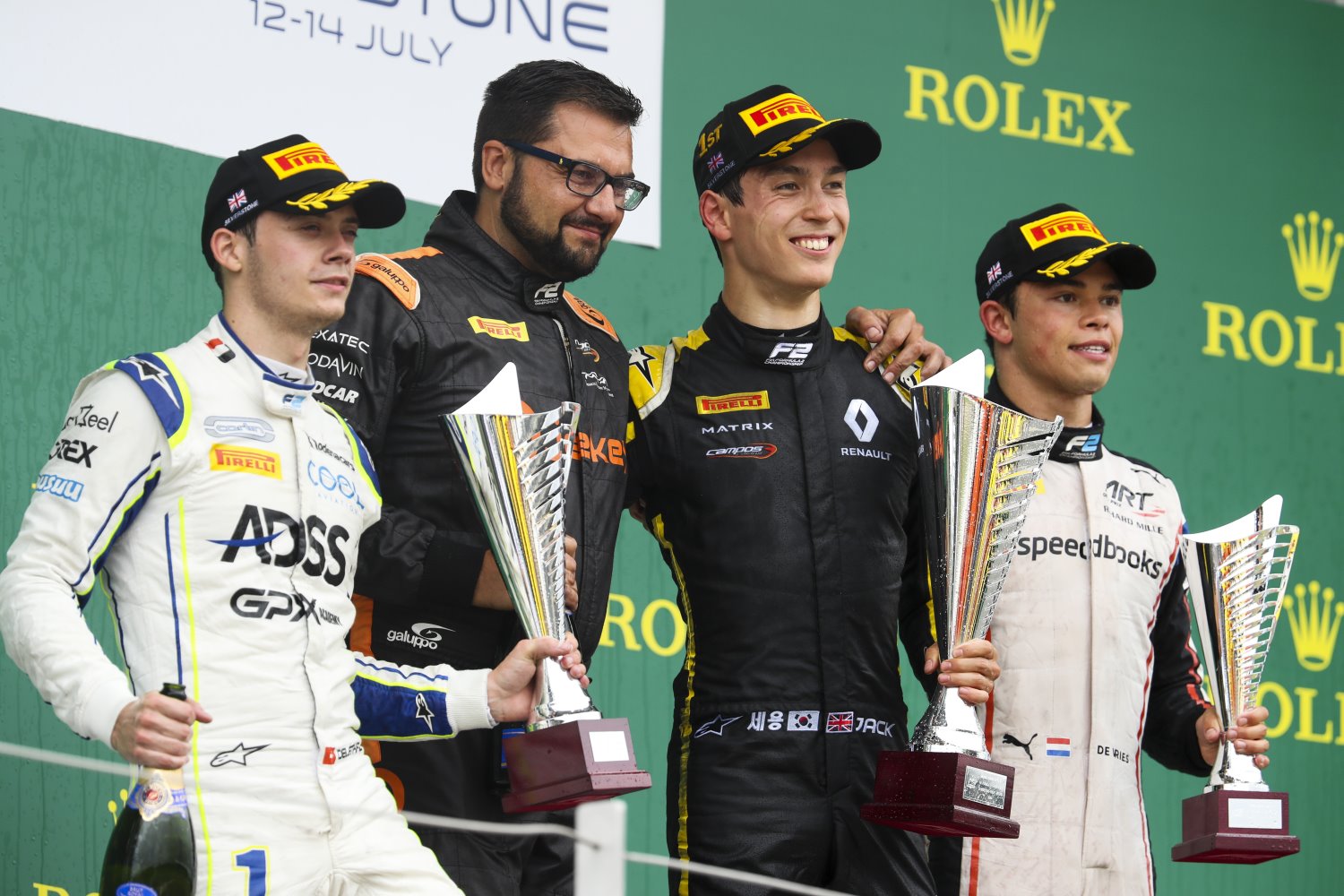 Jack Aitken gave British racing fans a reason to cheer at Silverstone, clawing his way from fourth on the grid for a first home win in the Sprint Race. The Campos driver achieved his best finish since Azerbaijan, crossing the line ahead of Carlin’s Louis Deletraz and ART Grand Prix’s Nyck De Vries.

Aitken got the better of another British driver at the race start, as he joined Deletraz and De Vries in lunging ahead of reverse grid pole-sitter Callum Ilott who was slow off the line. The trio flung themselves down the right of the Ferrari Junior and dropped him to fourth at Turn 1.

Deletraz made the best start of the three and headed the group going into Lap 2, as Aitken began to hone in on De Vries. The Brit unsettled the Championship leader and made his move, arrowing beautifully down the side of him, having taken a tow. The Dutchman briefly fought back, but bumped the back of the Campos car and handed over the position.

This left the Championship leader in view of Ilott, who took a peak at the right of the ART machine, however, the Briton appeared just short of the pace required for an overtake and remained in behind.

Feature Race winner Luca Ghiotto continued to display UNI-Virtuosi’s pace advantage at Silverstone, moving up to fifth with an overtake on Nicholas Latifi. The Italian had eyes on Ilott, but was unfortunately forced into a tire change and returned from the pits at the back of the field, in an agonizing end to his weekend.

Back at the front, Deletraz had held a near 3s lead over Aitken, but the Campos man was running quicker and twice set a faster lap as he began to eat into the air between them. The Renault test driver whittled it down to DRS range within two laps and the strain on the Carlin was too much for Deletraz.

No sooner had the gap dropped beneath a second, had Aitken arrived in the shadow of the race leader, halving the time difference to under 0.5s. The 23-year-old looked up and glided down the side of Deletraz who was powerless to prevent the move.

From there, the order remained unchanged, as Aitken kept his cool in front and held on ahead of Deletraz. De Vries completed the podium in third to salvage something from Round 7, ahead of Ilott, Latifi, Mick Schumacher, Nobuharu Matsushita and Guanyu Zhou.

The drivers’ championship remains in the hands of De Vries, who leads Latifi by 31 points. Ghiotto is third on 122, ahead of Sergio Sette Camara on 121 and Jack Aitken on 113. DAMS top the teams’ championship on 260 points, with UNI-Virtuosi second on 227. ART Grand Prix sit third on 176, with Campos Racing fourth on 143 and Carlin fifth on 125.

De Vries will aim to pick up speed again in Budapest at the end of July, when the F2 Championship returns to action at the Hungaroring.