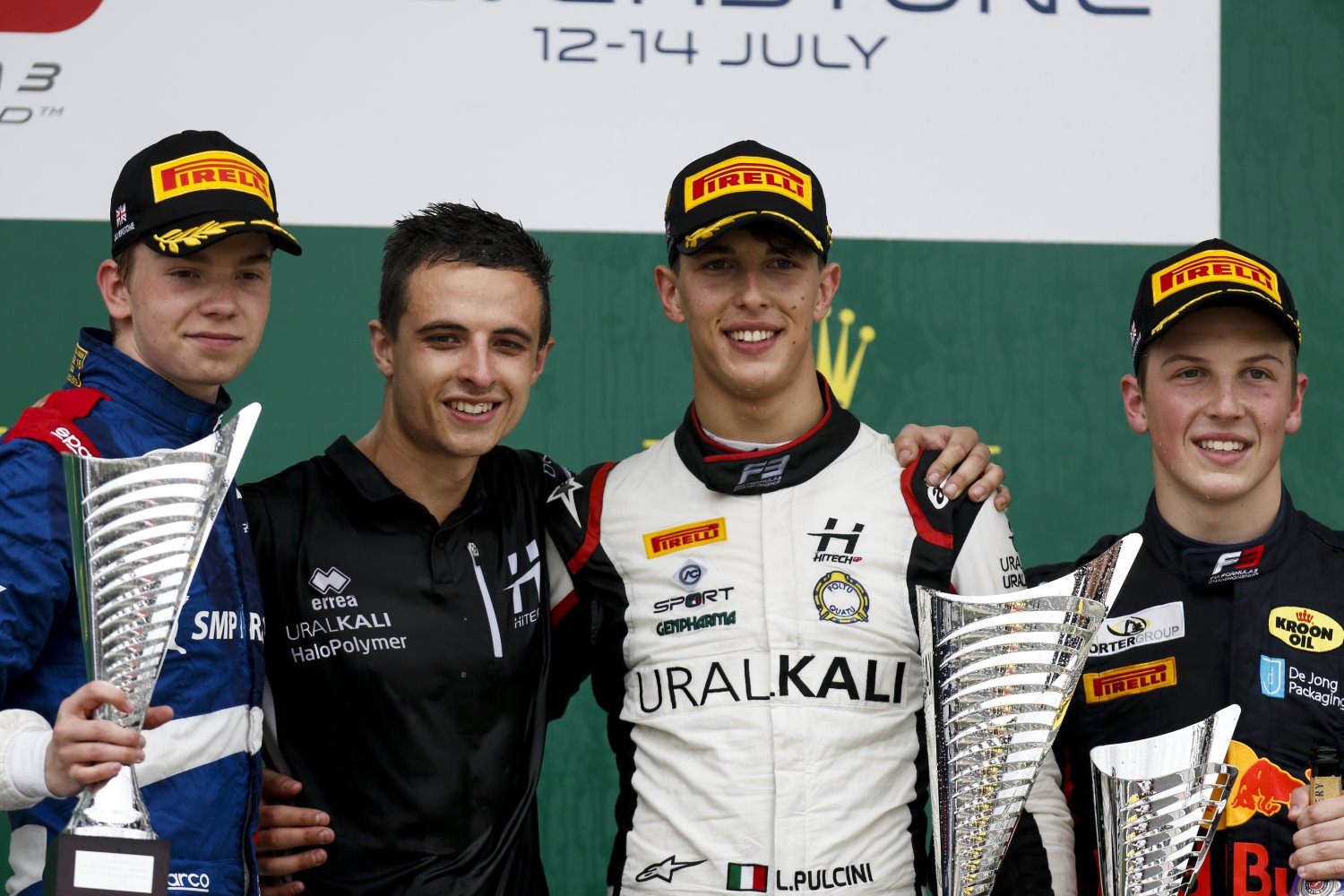 Leonardo Puccini denied Championship leaders PREMA a win for the second round in a row, edging out Robert Shwartzman for his first taste of champagne this season, with a blistering drive in Race 2.

The Russian racer made a late charge through the field, but could only rise as high as second, coming unstuck against the dominant Italian who secured his team’s second victory at Silverstone. Reverse grid poleman Liam Lawson completed the top three to earn his first podium in FIA Formula 3.

Lawson had gotten away cleanly at the start, with Pedro Piquet and Christian Lundgaard busy squabbling amongst themselves for P2. Pulcini made the best beginning of the lot, lunging ahead of Shwartzman midway through the first lap for 4th, while the Russian took air on the curb.

It was not a strong start for the Russian who also caught the tail of Race 1 winner JÃ¼ri Vips and lost further momentum. Pulcini already had his eyes on a provisional podium spot but would need two attempts to race round Lundgaard, making the second one stick at the final turn.

The Italian arrowed in on Lawson, but carefully calculated his move and patiently waited in the Kiwi’s shadow. The opportunity arose on lap 9 and he seared to the right of the MP Motorsport man and comfortably completed the move. His team urged him to build a 1s gap and then concentrate on his degrading rubber.

The three PREMAs were locked in tussle for 5th, but Shwartzman put a stop to the fight with an overtake on Lundgaard at the exit of Chapel which wobbled the Dane and allowed Jehan Daruvala to follow on through.

Having been stuck in 5th for the majority of the race, Shwartzman swiftly followed up his first move and blistered past Piquet for third, with his eyes locked on Lawson in P2. The overtake duly arrived around the outside of Stowe, completing an awesome couple of laps for the PREMA man and a remarkable turn-around.

His charge ended there as Pulcini had managed to fire 4s ahead, with just two laps to go. Action continued further back when Piquet and Lawson went wheel-to-wheel: the Trident man edged ahead and looked to have nailed down the position, but the Kiwi regained the spot thanks to slick defending moves. Daruvala added his name to the fight for third and clipped the back of the Brazilian as he backed off, sending Piquet into a spin and ending his race.

Pulcini held on come the checkered flag for his maiden win of the campaign, ahead of the resurgent Shwartzman and 17-year-old Lawson. Marcus Armstrong and Lundgaard completed the top five, followed by David Beckmann, Yuki Tsunoda and Fabio Scherer.

Shwartzman’s podium finish hands him back the lead in the drivers’ championship on 114 points, 12 ahead of Daruvala. Vips is third on 92, ahead of Marcus Armstrong on 77 and Piquet on 43. PREMA Racing still lead the teams’ championship on 293 points, with Hitech Grand Prix second on 127. ART Grand Prix sit third with 92, followed by Trident on 58 and HWA RACELAB on 41.

Action will resume at the end of July as the grid head to Hungary where Hitech will aim to continue their pursuit of PREMA Racing, who will be desperate to pick up the pace again at the Hungaroring.