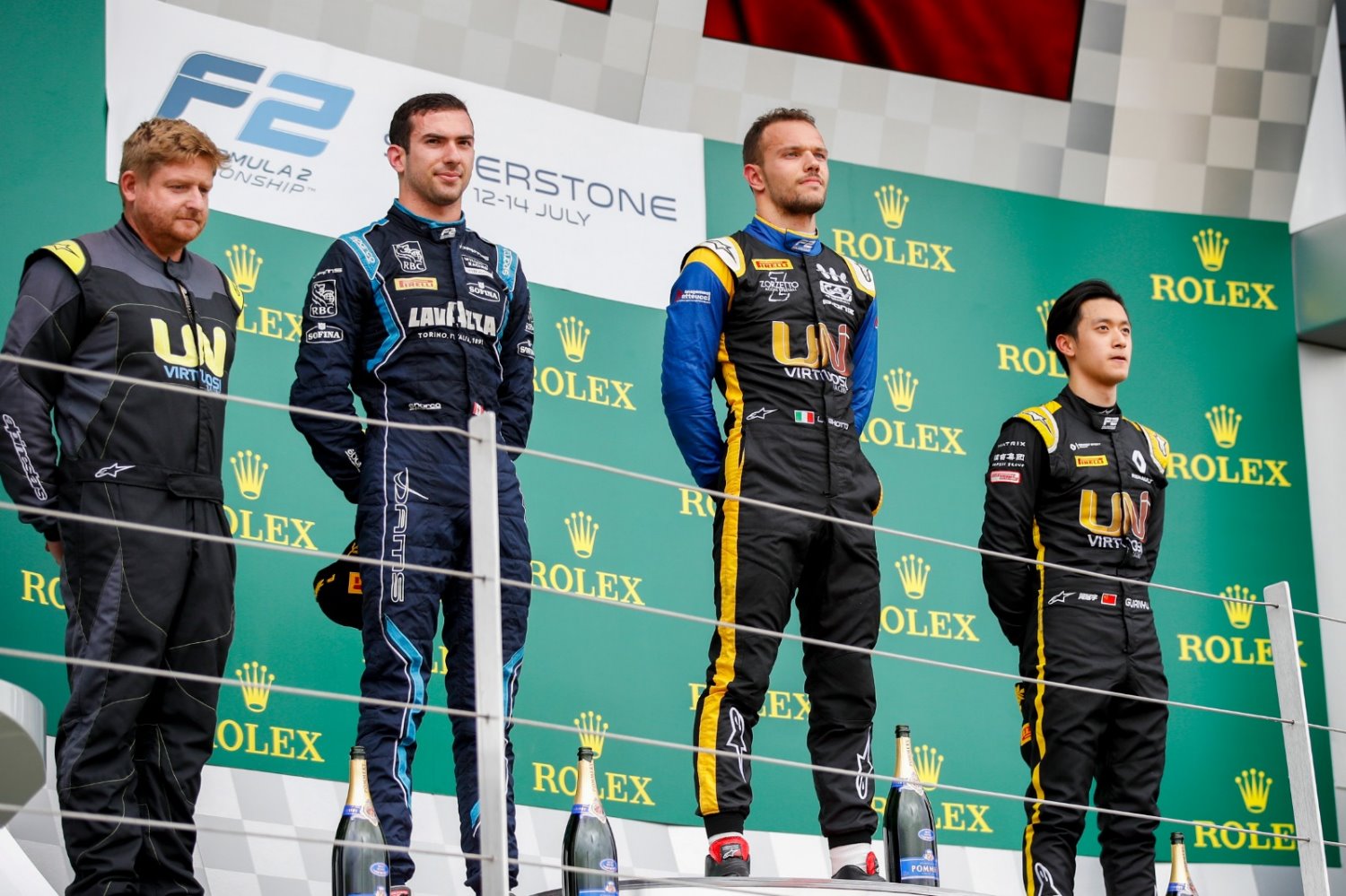 Luca Ghiotto continued his return to form in the FIA Formula 2 Championship, following up his double podium placing at Spielberg, with his first ever Feature Race win. The UNI-Virtuosi man came out on top of a fierce battle with rival Nicholas Latifi, before building up a solid 5s gap ahead of the DAMS man, and third placed teammate Guanyu Zhou.

The Italian went wheel-to-wheel with his polesitting teammate when the lights went out and eventually cemented P1 at the end of Turn 2, edging ahead of Zhou. It was just as tight between the two DAMS behind him, as Sergio Sette Camara and Latifi battled it out for third.

Nobuharu Matsushita leapt to sixth at the start, slipping through the middle of Nyck de Vries, Callum Ilott and Jack Aitken. The session was briefly yellow flagged as returnee Dorian Boccolacci stopped off track and was forced into retirement.

When racing resumed, Latifi launched ahead of his teammate at Becketts for third, while Ghiotto stretched his lead over Zhou to a still narrow 0.7s. Latifi’s tussle for first would begin shortly after, as he made light work of the Chinese racer for P2 and ducked into the pits for a change of tire.

The race leader pitted a lap later and returned just inches ahead of the Canadian in fifth, who had already warmed his rubber. The pair narrowly avoided a tangle when the DAMS’ driver bumped the back of the UNI-Virtuosi but they were able to retain control.

Ghiotto locked up at Brooklands upon their return to full speed, which allowed Latifi to make a move down the inside and lunge ahead. The Italian looked blisteringly quick all weekend though and began to eat back into the gap once his tires got up to temperature. Eventually, he was able to slip down the inside of Latifi and reclaim the positon at Stowe.

On the alternate strategy, Nikita Mazepin and Tatiana CalderÃ³n were thrust to the front of the field and were battling to gain an advantage ahead of their late stop. Ghiotto dipped between the duo for P2 and put some breathing space between himself and Latifi.

Further back, Aitken had managed to recover from his slow start and rise as high as sixth ahead of Louis Deletraz, Ilott and Matsushita. The British driver could clearly sniff further points and arrowed in on Championship leader De Vries. Getting within DRS range, he flung his car down the inside of the Dutchman and made the move stick going into Turn 3.

This would be the last course of action as Ghiotto closed out his first win since Bahrain back in March, having amassed a strong 5s lead over Latifi. He swept through ahead of the Canadian, who was followed by the second UNI-Virtuosi of Zhou. Sette CÃ¢mara ran through next for an all UNI-Virtuosi and DAMS front four, ahead of Aitken in fifth. De Vries, Delétraz, Ilott, Matsushita and Jordan King completed the top ten.

De Vries retains control of the driver’s Championship on 160 points, ahead of Latifi on 133. Ghiotto moves up to third with 122 points, one ahead of Sette CÃ¢mara in fourth. Zhou completed the top five on 104. In the team’s Championship, DAMS are still in control on 154 points, ahead of UNI-Virtuosi on 226. ART Grand Prix are third on 166, ahead of Campos Racing on 126 and Carlin on 111.

Local hero Callum Ilott will start on reverse grid pole in tomorrow’s Sprint Race at Silverstone and will look to earn his first race win in front of a home crowd.