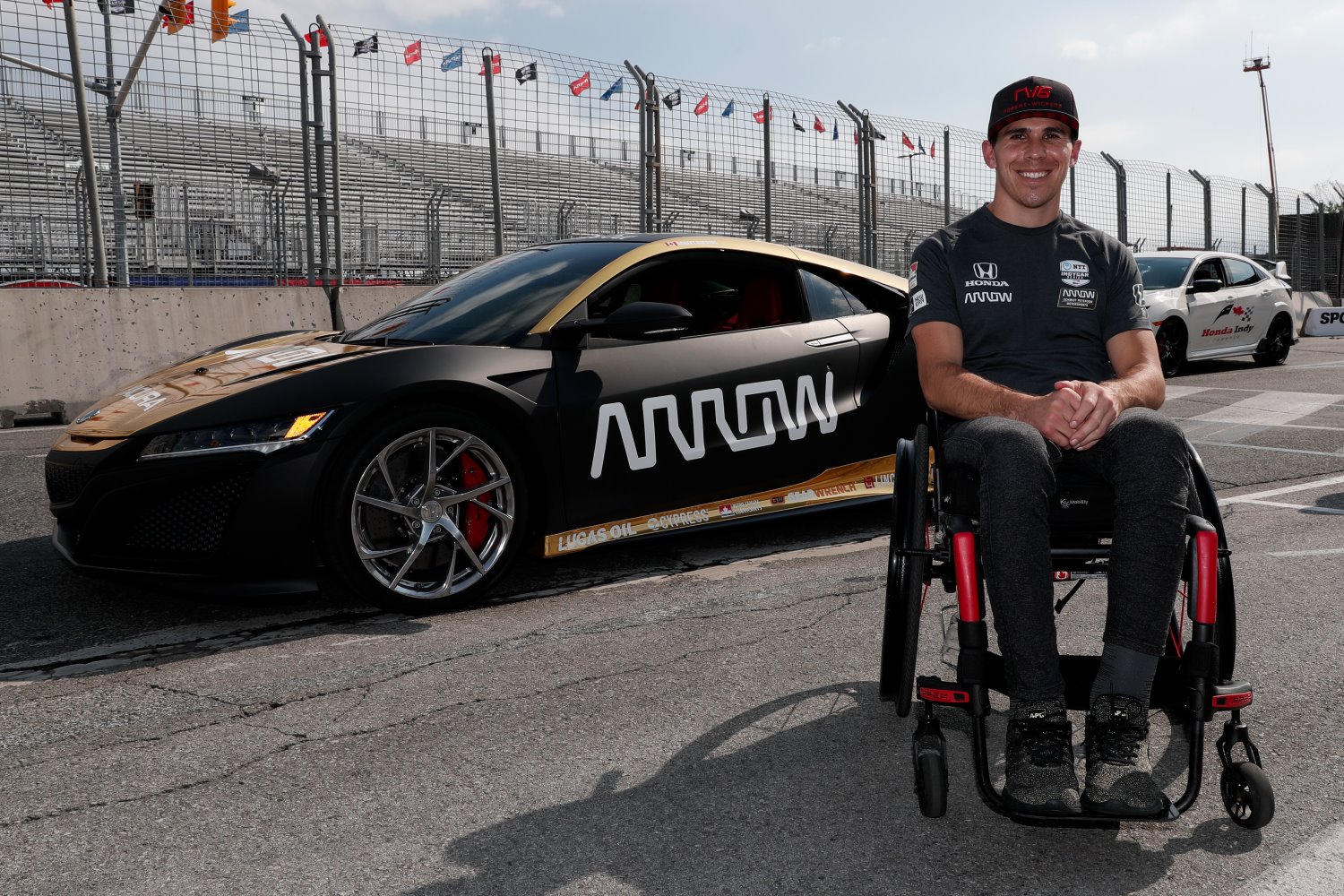 Robert Wickens has inspired the masses with his unrelenting determination to fully recuperate from a multitude of injuries from his accident last August at Pocono (Pa.) Raceway, with the most serious being a spinal cord injury.

On Sunday in front of a home Canadian crowd, the 30-year-old Guelph, Ontario, native will enjoy another monumental achievement in his recovery process when he drives an Acura NSX equipped with hand controls on the parade lap for the start of the Honda Indy Toronto at Exhibition Place.

Wickens, who was the NTT IndyCar Series' rookie of the year last season for Arrow Schmidt Peterson Motorsports, had the opportunity made possible by the team's engine manufacturer and its primary sponsor. Honda provided the Acura NSX while Arrow created the modifications to allow Wickens, without the use of his legs, to get back on track once again.

"I've had this dream for so long to get back, and this was the target to get the car ready for Toronto," said Wickens during a special press conference Friday during the Honda Indy Toronto race weekend. "And it was only fitting that it's the Honda Indy of Toronto, and it's my home race. It was kind of the perfect fit."

Wickens' first time in the striking black-and-gold Arrow-branded Acura NSX came Wednesday at Canadian Tire Motorsport Park in Bowmanville, Ontario, where he ran laps for about 90 minutes. He followed that shakedown of the car with a 30-minute test session Thursday on the Honda Indy Toronto's 11-turn, 1.786-mile street circuit.

"It's amazing," Wickens said. "I was able to get a couple practice laps in yesterday (Thursday), and it put a huge smile on my face. Just to think how fortunate I am, one, to have such great partners around me to make this happen. Racing is my dream, it's my passion, it's all I want to do. And to have a company like Arrow to be so hands-on building the hand controls and then a company like Honda that somehow trusts me with a very expensive car is — I still don't know why. But I actually bent a wheel already."

The emotional moment also will be enhanced by the fact that his fiance, Karli Woods, will be in the passenger seat for the parade lap. Wickens, however, kidded that he may be looking for a bit more behind the wheel when asked if he will pull off following his parade lap.

"I will neither confirm nor deny," Wickens said, smiling. "I'm trying to figure out what that penalty would be if I just kept going."

Wickens was joined by Honda Performance Development President Ted Klaus and Arrow Electronics Chairman, President and CEO Mike Long, who both were key to this project materializing. They see this as just the first phase of Wickens' comeback drive.

"There was an interesting piece of this that I think everybody in the world was wondering is will Robert go fast again," Long said. "I will tell you I don't think there's any question. We wanted to start this now with Robert so we can be a part of his rehab together with our friends at Honda and get Robbie back to racing because that's what he wants, and we're going to be there to support that effort all the way."

Added Klaus: "But I do hope that as Robbie really enjoys re-learning how to control the car with his hands, I'm sure he's going to realize he's just using different parts of his brain and his body with this man-machine, woman-machine challenge, it's just amazing."

Wickens said he feels "like I'm being portrayed as this extremely strong and inspirational person but behind every good person is a great team." That team includes everyone from Woods to the fans and the continual encouragement has been important to his progress over the past 11 months.

"It's just been a whirlwind," he said. "It's been a big eye-opener for me, this whole injury. I have a whole new perspective on life, which I guess there's good to take away from that,. But the biggest thing for me is when I was in rehab every single day, it was the support that I had from my racing partners, from my family, from Karli, from all the fans, from everyone that kind of was getting me there to the gym the next day.

"And I was always — when I was at rehab, I was just patient 31265, and then you get to become friends with these patients and you hear their story, and then like I get back to my place at the end of the day and I kind of think like, 'Man, I'm so lucky that I have such great support everywhere.' If I'm having a bad day, just all my fans can just come and pick me up where everyone else can easily get into this big spiral and get into some depression and everything."

The Honda Indy Toronto, an 85-lap race on the downtown city streets at Exhibition Place, will be televised live Sunday July 14 beginning at 3 p.m. ET by NBCSN. The event is Round 11 of the 17-race NTT IndyCar Series season.