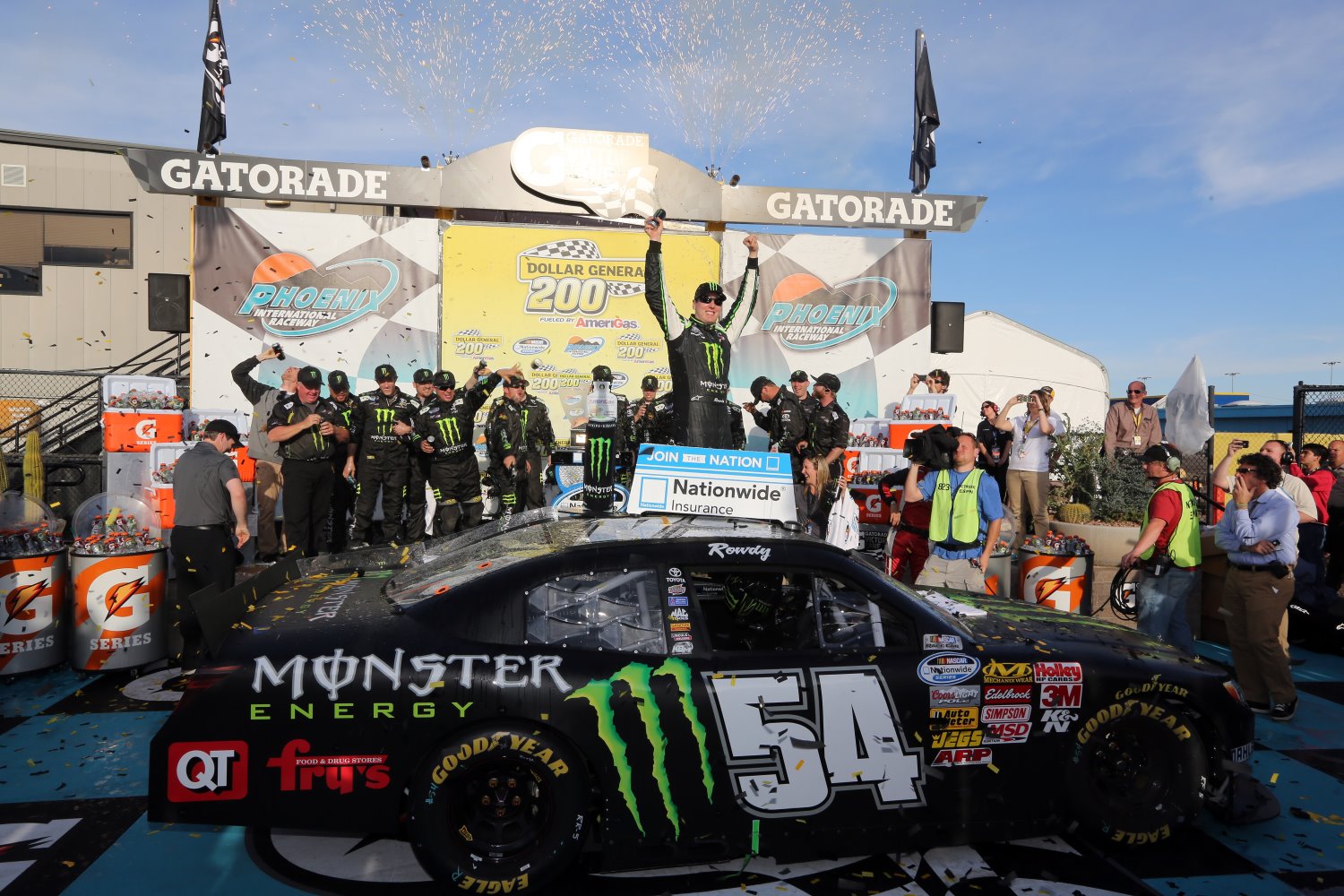 Nothing was going to keep Kyle Busch out of Victory Lane on Saturday at Phoenix International Raceway.

Not a pit road speeding penalty. Not a spate of cautions that kept bunching the field. Not Brad Keselowski, who in the past has found magic out front on old tires.

The prohibitive favorite in the Dollar General 200—after he won the pole in a laydown earlier in the day—Busch overcame a speeding penalty that dropped him to 22nd position for a restart on Lap 44.

That was a momentary setback. Working his way through traffic in short order, Busch passed Joe Gibbs Racing teammate Matt Kenseth for the lead on Lap 89. He lost the top spot briefly by pitting under caution on Lap 152, as Keselowski and three other drivers remained on the track, but Busch regained the lead on Lap 164, clearing Keselowski as the cars streaked into Turn 3.

Busch stayed out front the rest of the way. The victory was his first in the No. 54 Toyota and a record 52nd in the Nationwide Series.

"It's great to be back, working with (crew chief) Adam (Stevens) and these guys," said Busch, who was winless last year in the Nationwide Series driving for his own team. "It was a bummer deal not to be able to get a win at KBM (Kyle Busch Motorsports) last year, but (owner) Joe (Gibbs) putting me back in his operation and being back with the Joe Gibbs Racing side of things and Mark Cronquist engines, it's a phenomenal day for us to get back to Victory Lane, to feel the taste of it again.

"I was almost nervous, feeling like it was my first win, although it's win No. 52 in the series. It's nice to be back."

Jimmie Johnson, using a rare Nationwide Series appearance to get some extra laps on a track that has befuddled him since its resurfacing in 2011, finished 12th.

Even though he tried a contrarian strategy, Keselowski knew that tactics alone wouldn't be enough to overcome Busch's advantage in speed.

"I knew I had a shot if something happened to Kyle, and we had to put ourselves in position for good things to happen," Keselowski said. "But Kyle's car was so fast. I probably could have had four tires and he could have had none, and it still wouldn't have mattered. He'd still have drove through the field.

"When you have that much speed, you're pretty much immune to strategy."

Beginning his fifth full season of Nationwide racing, Allgaier is off to the best start of his career.

"The first five (races) kind of get you kicked off for the next 10 or 15," Allgaier said. "This has been huge for us, for Turner Scott Motorsports. Our program has come a long way during the offseason. I'll be the first to tell you that, at the end of the year last year, we were kind of scratching our heads. We knew we had a great organization. We just didn't know what we were missing.

"Everybody at the team really buckled down … This is the strongest season start I've had. I hope we can keep that going and transfer it into a championship."

The race wasn't yet two laps old when Johanna Long drove hard into Turn 3 and tagged the back of the Ford of Hornish, the series leader entering the race. With the front of her car damaged by the contact, Long slapped the wall exiting Turn 4, triggering a chain-reaction wreck that collected five other cars, including those of Hornish (who had fallen behind her) and Travis Pastrana.

"I don't know; it just took off on me," Long said of her contact with the wall. "I got in a little too hard, there (into) Hornish, felt bad, got under him. I got into the gas, and it just took off.

"I definitely didn't want to finish like this. It's really disheartening. I feel really bad. I don't know what else to say."

The aftermath of the wreck turned bizarre when the scoring transponder from Jamie Dick's car (another victim of the accident) lodged in the nose of Hornish's Ford. Though Hornish lost two laps on pit road while the transponder was removed, NASCAR restored the No. 12 to the lead lap because the extraction — to prevent Dick's car from being scored improperly – was ordered by the sanctioning body.

Hornish's travails weren't quite over. After restarting sixth on Lap 109, Hornish spun in Turn 2 a lap later to bring out the fifth caution but remained on the lead lap. The nose and hood of his car heavily taped, Hornish salvaged the seventh-place finish.