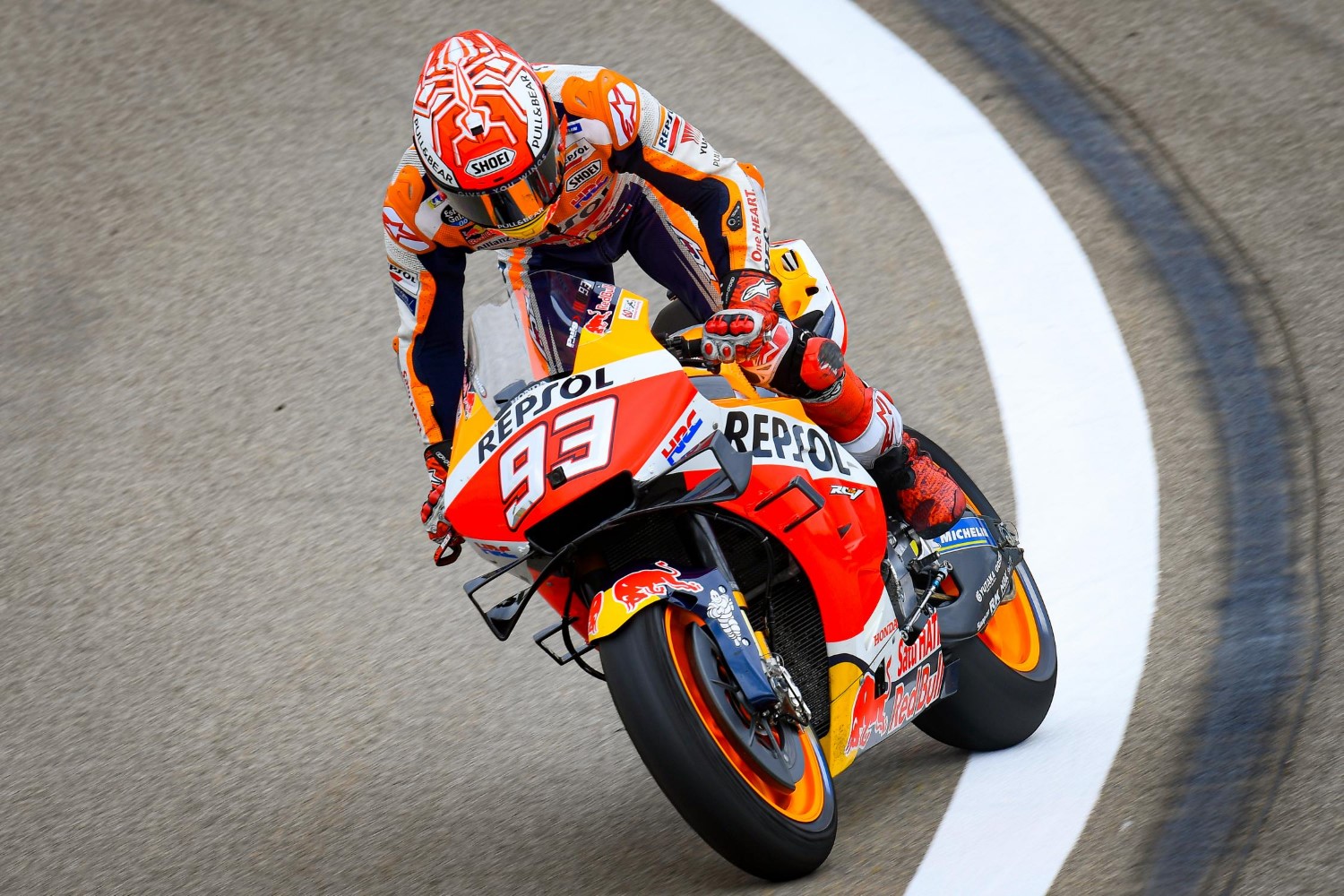 After being beaten to P1 by Fabio Quartararo (Petronas Yamaha SRT) in FP1 at the HJC Helmets Motorrad Grand Prix Deutschland, Marc Marquez (Repsol Honda Team) returned the favor in FP2 to lead the field by 0.341 after setting a 1:20.705, with Alex Rins (Team Suzuki Ecstar) putting his GSX-RR in between Marquez and Quartararo in FP2 as the two Spaniard’s lead a frustrated Frenchman on Friday.

Conditions were warmer in the afternoon and almost the entire premier class field were able to improve their FP1 times within ten minutes of FP2, with Marquez going top of the timesheets in the early stages of the session. Quartararo wasn’t one of the riders who was going quicker though, the rookie was the only man in the top 18 to not improve in the early stages. However, Quartararo took back top spot with 20 minutes remaining, just 0.013 separating the top two.

Other riders were also starting to make headway with less than 20 minutes to go, Maverick ViÃ±ales (Monster Energy Yamaha MotoGP) and Andrea Dovizioso (Ducati Team) putting in personal best times on the hard rear tires to cement their positions in the top ten after finish P5 and P6 respectively in FP1, before Rins then shot himself to P1 with under ten minutes to go. The soft rear tires were then put in and straight away, nine-time Sachsenring winner Marquez set the timing screen alight to go 0.3 clear.

Could Quartararo respond? A personal best lap time was put in but he remained third before teammate Franco Morbidelli ruined his next flying lap after cruising on the racing line in the first sector. Then, on his final flying lap, Quartararo was again left frustrated after catching a riding wounded Takaaki Nakagami (LCR Honda Idemitsu) – Day 1 honors would go to Marquez.

Rins would keep his P2 to improve from his P4 in FP1, just the start the Spaniard would have been looking for after his Assen crash, with Quartararo settling for P3. ViÃ±ales ends Friday in P4, 0.488 back from Marquez, with Pol Espargaro (Red Bull KTM Factory Racing) completing the top five after going well on the soft rear tire in FP2 – the Spaniard improving from a P11 in FP1. Cal Crutchlow (LCR Honda Castrol), despite riding with a right knee and tibia injury, had a solid day at the office to finish sixth overall, a nice jump from P10 in the morning session. Jack Miller (Pramac Racing) was a late improver to finish seventh, the Australian staying put after finishing seventh in FP1 to lead the Desmosedici charge.