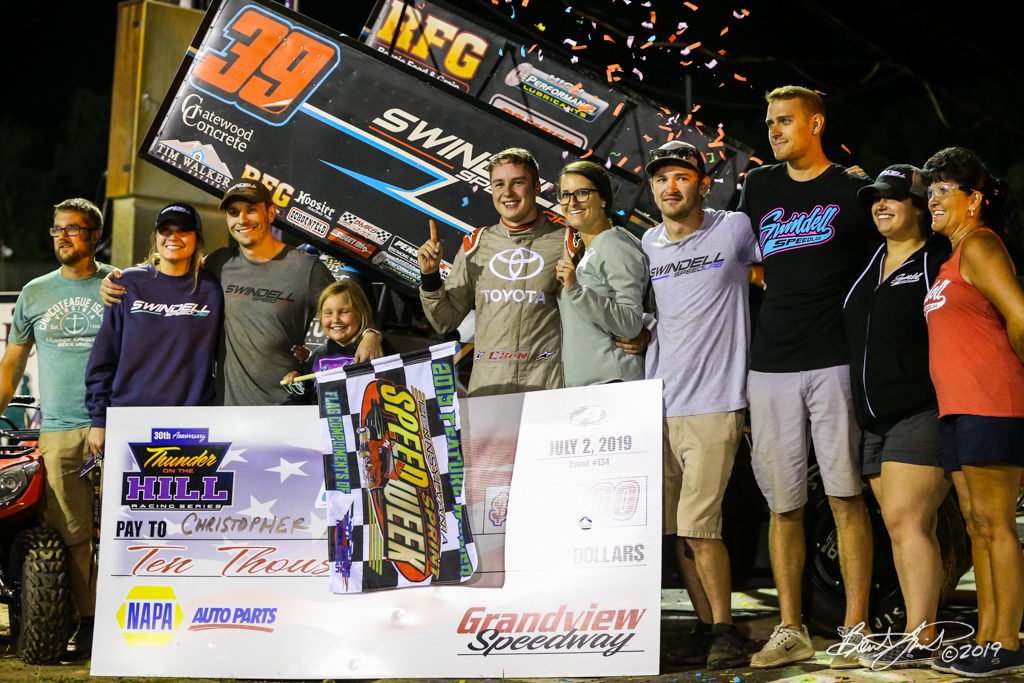 Mother Nature offered a reprieve to race fans Tuesday Night at Grandview Speedway, providing just enough clear weather for Norman, Oklahoma’s Christopher Bell to claim the 410 Sprint Car main event, while Boyertown, Pennsylvania’s Jeff Strunk scored the win in the Modified portion of the double-header event. A big crowd turned out for the NAPA Auto Parts Thunder on the Hill event attracting a field of thirty 410 sprint cars and thirty-eight modifieds. The battles were plentiful all night but the biggest story was how the Grandview Speedway track crew fought back after a thunder stormed drenched the speedway surface. The outstanding work by the track crew with help from the modifieds quickly returned the speedway back into race ready conditions after a one hour and fifteen minute rain delay. As the checker flag fell on the modified feature, the rain once again began to fall, but the show in its entirety was presented.

Bell used up every inch of the racetrack on his way to a $10,000 payday as part of Pennsylvania Sprint Car Speedweek. The was Bells first ever Thunder on the Hill Racing Series victory.
“I had a hard time figuring out where the car worked best, I just kept moving around," Bell explained in post-race victory lane ceremonies. “I almost crashed a couple of times."

Pole-sitter Lucas Wolfe and Bell raced down to the drop of the green, but action slowed quickly for a six-car tangle that sidelined Pennsylvania Speedweek point leader, Freddie Rahmer.

Bell didn’t bat an eye on the ensuing restart racing around Wolfe and disappearing from the competition – a man on a mission, Bell encountered lapped traffic on the 8th circuit dodging slower cars with his sight set on the winner’s purse.

James McFadden, aboard the Kasey Kahne Racing No. 9 machine, slid passed Wolfe on the 12th lap and it didn’t take long for him to rope in Bell and challenge for the lead. The red flag flew just prior to the halfway when Jessie Attard got upside down in turn three.

Bell had his hands full on the restart with McFadden and Lance Dewease right on his rear bumper.

“I struggled just passed halfway, I used every inch of the race track and tried to block those guys behind me," Bell explained.

McFadden would make one last-ditch effort for the victory, but ultimately settled for second, Lance Dewease finished in third, Lucas Wolfe in fourth, and past Thunder Cup winner Aaron Reutzel finished in fifth.

Christopher Bell’s sweep included the Quick Time with a lap of 11.617. Heat Races were won by Aaron Reutzel, Lucas Wolfe, Danny Dietrich, and Kyle Reinhardt. Mark Smith scored the win in the B-Main.

Brett Kressley and Mike Gular started on the front row of the NASCAR 358 Modified feature event, with Gular gaining control of the top spot. Gular dominated the first half of the 30-lap event clicking laps off with a strong contingent of Modified drivers behind him.

The top three competitors were door-to-door in the closing portion of the event, with Gular, Kressley, and Strunk all moving to the point in a single lap. Strunk would score the upper hand threading three-wide between Gular and Kressley.

Strunk led the final ten laps of the feature event with Kressley well within striking distance and riding the rear bumper of #126 on the final lap. Kressley rolled home in second, Mike Gular finished in third, Craig VonDohren in fourth, and Duane Howard rounding out the top five. Kressley worked his way to victory lane, but this time to congratulate the great run by Strunk. The thirty lap modified win was worth $3,000.

Rain delayed the start of the event with 410 Sprint Car Time Trials finally rolling off at 8:45 PM, the rain fell again at the drop of the checkered flag.