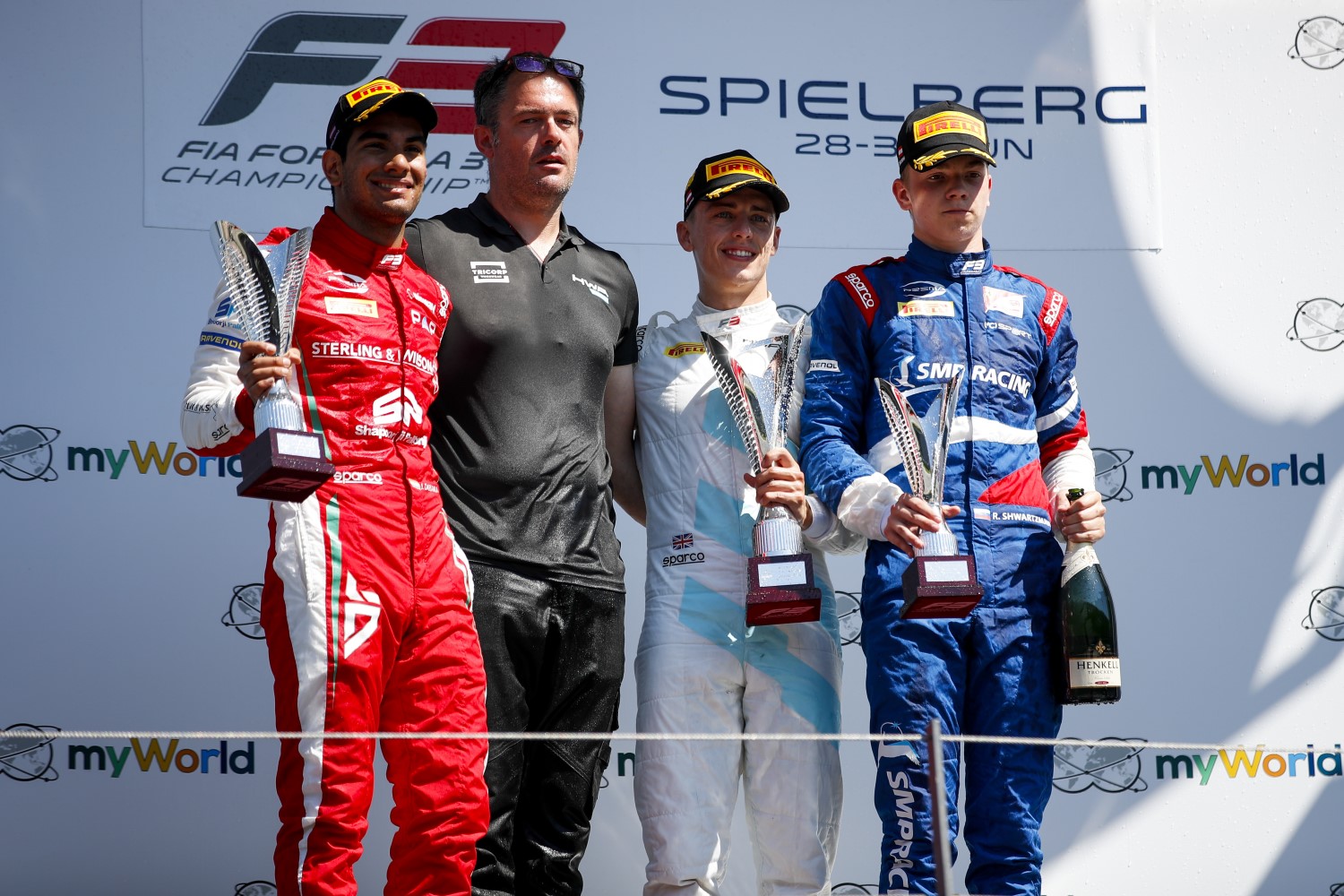 Jake Hughes claimed his first ever FIA Formula 3 win in controversial circumstances after leader Robert Shwartzman caused a collision with teammate Marcus Armstrong on the final lap of Race 2 in Austria. The Russian had been unwavering for the majority of the morning, but lost his nerve when his teammate scampered past him in the dying embers and inadvertently cut the Kiwi’s rear tire in an attempt to reclaim first.

Despite suffering damage to his front wing, the Russian managed to complete his final tour of the Red Bull Ring in first, but was demoted to third after a five second time penalty was added for causing the collision. This saw Hughes promoted to the top of the podium for his first ever win in the category, ahead of Jehan Daruvala.

The HWA RACELAB man begun the morning in second and failed in his initial efforts to pass reverse poleman Lirim Zendeli who wasn’t prepared to let the position go and toughed it out around the outside of the Brit at Turn 1 to retain the lead. Pedro Piquet suffered heartbreak at the start when he lost control of his Trident and rotated at the first turn, chucking him back to P29 and ending his hopes of a first F3 win.

The front seven positions proved interchangeable in the first lap and Armstrong managed to force his way to third behind Zendeli and Hughes. Shwartzman perched up behind him in fourth, while JÃ¼ri Vips and Richard Verschoor clambered ahead of Daruvala for fifth and sixth.

The next few laps played out in a calmer manner until Armstrong took aim at first place going three wide with Zendeli and Hughes around the corner with no room for error. Shwartzman added a fourth car to the mix as Hughes emerged ahead of them all for first, with the Russian claiming P2 in a shrewd maneuver.

His time at the front didn’t last long as Shwartzman beat him at the top of the hill, with the Brit’s car unable to match the Russian’s speed. Armstrong followed his teammate through a lap later and handed their team the prospect of a tasty one-two finish.

The Third PREMA machine was running down in sixth, ahead of Vips and Verschoor. The Indian was harrowing poleman Zendeli, but slipped in his pursuit and was punched back to seventh by Leonardo Pulcini who capitalized on his mistake. Daruvala reacted with haste and recovered to pass both Zendeli and Pulcini for fifth and close in on Max Fewtrell. Fourth was soon his after a delicious lunge on the Englishman.

All wasn’t well out in front as Armstrong refused to sit behind his teammate and rattled on in his pursuit of first. Hughes was perched comfortable in behind the combating PREMA duo when his team foreshadowed future events and told him to wait patiently for one of them to make a mistake.

A virtual safety car brought a brief break in racing when Alex Peroni lost his rear under breaking and ran into the back of his Campos teammate Sebastian Fernandez. Action resumed with two laps to go and Armstrong’s pursuit of his teammate began once more.

The fight went down to the last lap and Armstrong was finally able to muster up the speed to dart down the side of Shwartzman. The Russian was forced to the rear right of his teammate, but swerved too close and nicked the Kiwi’s back tire. Armstrong was sent dizzily onto the gravel and shunted down the grid.

Shwartzman maintained control of his vehicle to regain the lead and soldiered towards the finish line despite a battered front wing to finish narrowly ahead of Hughes. News soon broke of a penalty for the Russian, due to the collision, which forced him back to third, behind teammate Daruvala and first placed Hughes. The Briton was surprised to be asked to stop by the number 1 panel in the parc ferme before celebrating with his team their good fortune.

The Championship will travel to Silverstone in two weeks’ time when the teams will continue their attempts to bridge the gap between themselves and PREMA.