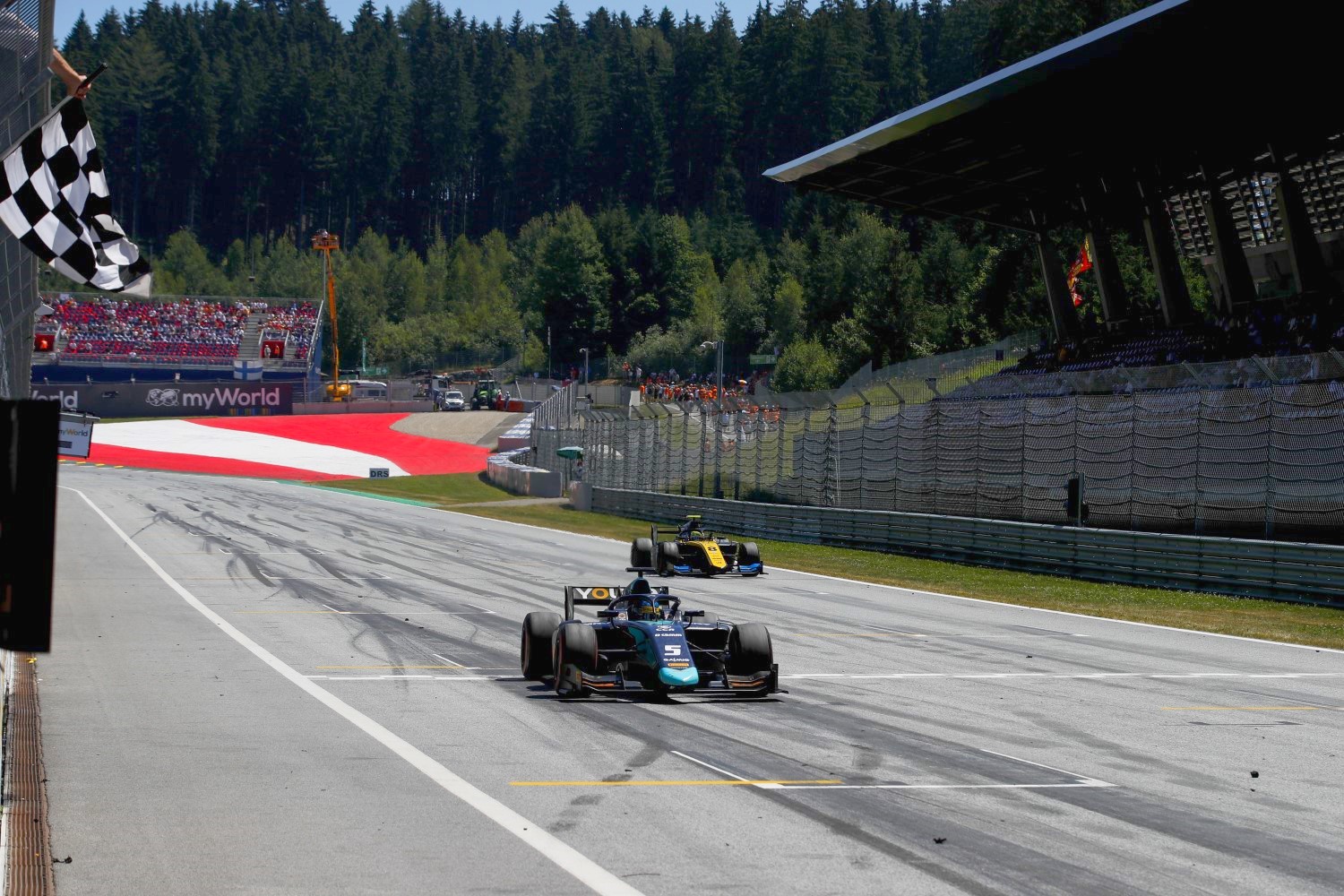 Sergio Sette Camara claimed a controlled first win of the 2019 FIA Formula 2 Championship, pouncing from third on the grid and maintaining the position, despite a late safety car bunching up the drivers and creating a tense final few laps. The Brazilian finished ahead of UNI-Virtuosi’s Luca Ghiotto and Championship leader Nyck De Vries.

Jordan King started on reverse grid pole and made a clean getaway off the line, as Louis Delétraz focused on retaining second place. All eyes were on De Vries as he claimed three scalps when the lights went out and honed in on Delétraz. The Dutchman didn’t wait around: he was past the Carlin driver ahead of Lap 2 and sat just 0.4s behind King.

De Vries promptly leapt ahead of the poleman when DRS was enabled and left King to squabble with Delétraz over second. The Swiss driver came out on top and King began to drop down the order.

De Vries’ delight turned to disarray shortly after when the pit limiter was suddenly activated on his ART Grand Prix machine and he plummeted back to his starting position of 6th. By the time De Vries got back up to speed, Sette Camara had replaced him at the front of the field, following a DRS enthused moved on Delétraz.

Mick Schumacher was making waves further down the grid. The German had started in lowly 18th after a frustrating Feature Race, but quickly clawed his way through the order and claimed a provisional points’ position with an overtake on Anthoine Hubert.

Sette Camara was the holding the fort out in front and maintaining a healthy gap between himself and Delétraz who had Ghiotto on his tail, having seen the Italian overtake Guanyu Zhou for the final podium spot. The Swiss driver managed to garner further pace from his Carlin and return to within DRS range of the DAMS’ driver ahead of him, and in doing so, fend off Ghiotto.

His improvement was short lived and what appeared to be a mechanical failure sent him curtailing nastily into the barriers, after he span on the corner. The Swiss thankfully emerged from the battered machine unharmed and a safety car was brought out to clear up the mess.

The safety car’s intervention in the race resulted in a bunched-up front five with only two laps remaining. Sette Camara held on ahead of Ghiotto when racing restarted, but Zhou was thrown off the podium by De Vries who had recovered from his earlier issues.

Sat behind the Chinese driver was Schumacher, who’d enjoyed a remarkable race and somehow made his way up to fifth on the grid. The German was not done there and swiftly surged past the Chinese racer for fourth, as Zhou was struggling with his tires and suffered an array of further overtakes.

A second podium place this weekend secures De Vries’ position at the top of the Drivers’ standings with 152 points, ahead of Latifi on 115. Sette Camara is third with 107, followed by Ghiotto on 97 and Aitken on 86. DAMS’ stronghold of the teams’ standings remains with 222 points, with UNI-Virtuosi second on 182, ART Grand Prix on 158, Campos Racing on 116 and Carlin on 103.

De Vries will attempt to further stretch his lead at the top of the Championship in Round 7 at Silverstone in two weeks’ time.