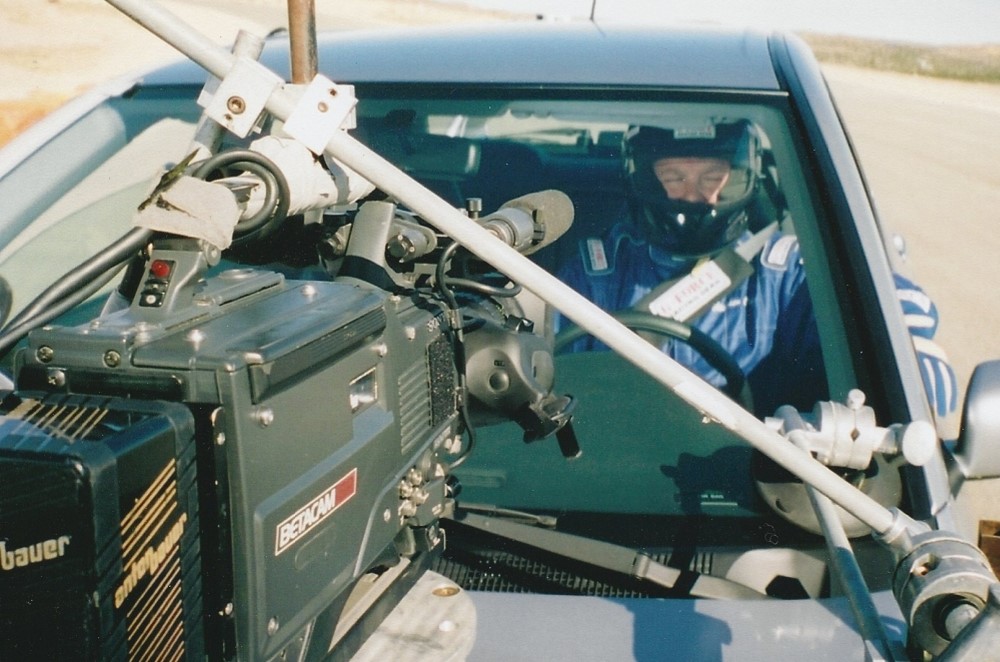 Only now do I dare speak of it.

In the fall of 2005 I got a call from a producer in Santa Ana, California. It seems that Mitsubishi needed someone to drive the brand new, rally-inspired 2006 Lancer Evolution IX for a film production to be shot on a road course.

They must have thought me marginally competent (there's no accounting for taste) because I was offered the gig. I took it. Even I'm not dumb enough to miss an opportunity like that.

Helmet in hand, I arrived at Willow Springs International Raceway in Rosamond, an hour or so north of Los Angeles, to find that two cars had been prepped for the shoot. One was a lean, 271-horsepower, turbocharged machine that was ready to rock.

The other was identical except for the huge rack that was mounted on the hood with cameras poking every which way. I looked on in horror and asked the producer how much weight had been added to the front end.

Sure enough, the "camera car," as we called it, pushed like a snowplow. The entire geometry of the car was fouled up with the additional front weight. It was a nightmare to drive.

Worse yet, I couldn’t see a bloody thing. A big microphone was mounted directly in my line of sight about 18 inches from the windshield. Just behind the microphone was a camera the size (and approximate weight) of a cement block. Just behind the camera was a huge, stainless steel mounting bracket. Somewhere beyond the bracket was rumored to be a racetrack, although that was largely a matter of faith.

I was driving this thing at speed, sliding through the turns with 300 lbs strapped to the hood and a camera blocking my vision. Life is truly an adventure.

The other Lancer Evolution was fantastic. It was a joy to drive in every respect. The handling was tight, the turbochargers spooled quickly, and the brakes were astonishing.

Aha. So this was how the real Evo drove. I was more than impressed. Mitsubishi had their act together. This was a fine automobile.

We spent the better part of a week at Willow Springs where I was asked to put the car through every conceivable maneuver. After a couple of days, a few executives from Mitsubishi's front office began asking me to take them around the track.

I gave each of them the same routine… only one passenger at a time so as not to upset the weight balance on the car. They were to tell me, on a scale of 1 to 10, how fast they wanted to go before we began. I wanted them to have fun without barfing on the dashboard. Nearly all of them said, "10." Only one of them lasted more than a lap. I told you this was a cool job.

The people on the shoot were wonderful. Absolutely professional and fun to work with. The crew was having a great time. The cars were driven extremely hard and from all appearances, they held up well and performed admirably on the track. We finished the production and it eventually won a Silver Telly award.

But a few months later I got another call from the same producer. "Hey, Stephen, did you happen to… well, uh… crash either of those cars?"

Now that was a weird question.

The producer explained that a few things weren't quite right when the cars were returned to Mitsubishi after the filming was finished. Apparently the engineers go over each car individually with a fine-toothed comb and some of the tolerances were out of whack.

The gap between the hood and the front fenders was off by a few thousandths of an inch. So was the tolerance between the doors and the door frames. In fact, the unit bodies were so far off specifications that Mitsubishi had called to say that both of these beautiful new Lancer Evolutions were going to be crushed.

I thought they just fixed stuff like that, but then, what do I know. I'm just the driver. But it sure seemed like a monumental waste to crush two brand new Lancer Evolutions.

After a moment of stunned silence, I responded. No, of course I hadn't crashed either car. And if I had, how could they not know? It would have shown up on ten different cameras. Apparently, the stress of being driven flat out was just a bit too much for a street car; even a really good one.

Our producer sounded pretty worried at the time, but he knew as well as I did that every single lap was on film. We hung up the phone and I nervously awaited a phone call, a lawsuit, or a $60,000 invoice to arrive in the mail. To my eternal relief, none did. I had apparently been acquitted in The Great Mitsubishi Double-Murder Case.

The cars themselves simply vanished. Both machines disappeared into Mitsubishi's engineering department and were never seen again by any of us.

I can't say with any certainty what finally happened to these two beautiful rally-inspired Lancer Evos. Didn't wanna know and was afraid to find out. But it appears their final laps were turned at Willow Springs International Raceway before going to that great junkyard in the sky.

And I am innocent. I have the proof on video.

That's my story and I'm sticking to it.