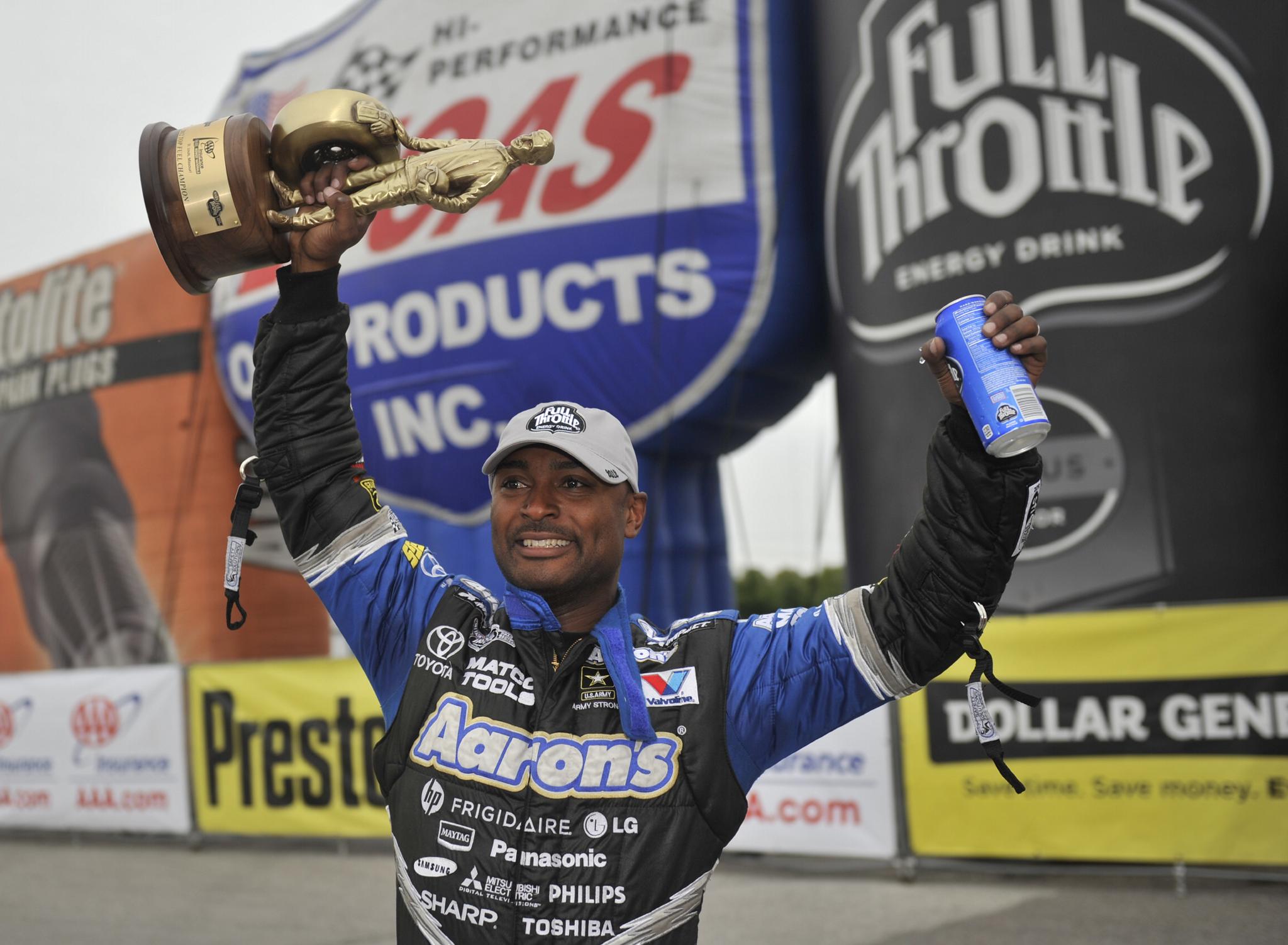 Antron Brown raced to his sixth Top Fuel victory of the season Sunday at the AAA Insurance NHRA Midwest Nationals at Gateway Motorsports Park and in the process increased his championship points lead.

Brown defeated championship rival Spencer Massey in the final round and moved 21 points ahead of the Texas driver as only three races remain in the Full Throttle Countdown to the Championship playoffs.

Brown, who battled side-by-side with Massey all weekend, took the victory with a final round performance of 3.766 seconds at 325.22 mph in his Matco Tools/Aaron’s dragster, while Massey trailed with a 3.812 at 324.05 in his FRAM/Prestone dragster.

“Our team hit a grand slam here this weekend," Brown said. “We qualified No. 1 and took it one round at a time. It was a great weekend, but it’s always a struggle. This class is very competitive, and these guys aren’t playing anymore. You have your struggles here and there, and you have to keep on overcoming them. I’m just so happy for our Aaron’s/Matco guys."

Brown beat Bruce Litton, Steve Torrence and Brandon Bernstein in early rounds before unleashing his quickest run of the day in the final against Massey.

“It was a stressful day where we matched up against some great competition," Brown said. “Matching up against my teammate [Massey] in the final was big – we’ve been back and forth in the points. It’s great to have six wins, but right now they’re all in the past. We need to go back to the shop and get focused on these last three races. It’s just so competitive out here and this points race is going to go down to the last race."

Beckman moved to within 30 points of Funny Car points leader Ron Capps by racing to his third victory of the season. He took the final round win in his Valvoline NextGen Dodge Charger over Matt Hagan, who fouled at the start in his DieHard Dodge Charger.

“It’s nice to know that we have a car that can challenge for the championship," said Beckman, who beat Alexis DeJoria, Jeff Arend and Tony Pedregon to advance to the final round. “This wasn’t do-or-die, but it’s getting pretty close. I’m not saying we counted points, but we had a tablet going with a lot of cross marks and updated math. Losing to Capps by four-thousandths in Dallas hurt a lot, but today went a long way towards healing that. It’s awesome to know that we have three races to go and are only 30 points back. All we want is a fighting chance going into Pomona."

Points leader Capps lost in the second round to Hagan, a non-Countdown performer and the defending world champ who has now advanced to back-to-back final rounds in the playoffs.

In Pro Stock, Enders earned her fourth victory of the season and first ever in the playoffs by using a reaction time advantage to defeat series points leader Allen Johnson in the final round. She powered her GK Motorsports Chevy Cobalt to a 6.540 at 211.79 to finish just inches in front of Johnson’s Team Mopar Dodge Avenger, who posted a quicker, but losing run of 6.538 at 212.13.

“This is the win I wanted to get in Texas last week, but I’ll take it," Enders said. “We were definitely consistent this weekend and that’s why we got to the final so I could race my bud [Allen Johnson] and get to the winner’s circle."

With the runner-up finish and third straight final round appearance in the Countdown playoffs, Johnson increased his series lead to 109 over Line, while Enders moved to third in the standings, 126 back of Johnson.

Krawiec claimed his seventh Pro Stock Motorcycle victory of the season and increased his points lead to 33 over his final round opponent and teammate, Andrew Hines. Krawiec took his 18th career victory when Hines fouled on his identically-prepared Screamin’ Eagle Vance & Hines Harley-Davidson.

Krawiec took three of his round wins via red-light starts by his opponents, including his first round win over Steve Johnson and second round win over Chip Ellis. Krawiec used a strong performance on his Screamin’ Eagle Harley-Davidson to outrun Hector Arana Sr.’s Lucas Oil Buell in the semifinals.

“Andrew and I were lucky to take out the Hectors in the semis and that really helped us in the points," Krawiec said. “I lost in Dallas due to rider error. I had a .066 light which is unacceptable. This week I was good on the tree and had a good bike which is what it takes to win some rounds. Yes, I had three red-lights against me here but I did well and all my runs were good. I pushed it a little in the final but I know the potential of what he [Andrew] has. He crushed me in Charlotte."