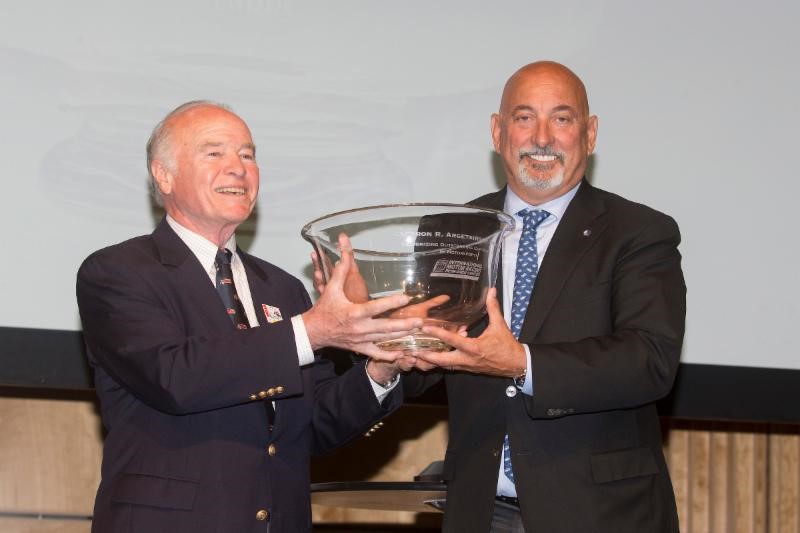 Rahal, who fields race teams in INDYCAR, IMSA and Jaguar I-PACE eTROPHY Series, was honored by the International Motor Racing Research Center for his outstanding commitment to the sport of auto racing. This was the sixth year the glass trophy has been presented. Previous honorees were Chip Ganassi, Richard Petty, Roger Penske, Mario Andretti, and Jim France and the France Family.

The award was presented to Rahal, who served on the board of the IMRRC from 2015-2018, by J.C. Argetsinger, former president of the IMRRC, and one of nine children of the late Cameron and Jean Argetsinger.

"About a decade ago we were so fortunate that Bobby Rahal, a great ambassador for the sport, lent his prestige and his energy, and joined our board," said Argetsinger. "And then [there was] the excitement when he became our chairman. His contribution was truly enormous.

"I'm so proud to represent the Argetsinger family, to be here to present this award to a man who so richly deserves it. Tonight I can't think of anyone else better in this country than Bobby Rahal [to receive] this award. He's been a great help to the IMRRC as well as young drivers around the world."

Throughout the evening salutes were given in person and by video. Among them were previous Argetsinger Award recipients Roger Penske, in the audience, as well as Ganassi, Petty and Andretti via video, and Jim France via statement. The videos made by racers from all corners of motorsports included Don "the Snake" Prudhomme, JR Hildebrand, Scott Dixon, Zak Brown, Takuma Sato, Danica Patrick, John Force, Lisa Boggs of Firestone, David Hobbs, and competitors from a number of different series.

Speaker after speaker told stories of the intense commitment and passion that Rahal has shown throughout his career as a driver and team owner.

NHRA Drag Racing champion Force, whose daughter Courtney is married to Rahal's son Graham, said, "It's all about your family, those children, and those grandchildren, those boys and girls, men and women that you have raised. Let me just tell you, you know that's better than all the trophies put together, because whether you like it or not, we're family."

Said Penske, the 2016 recipient of the award, "Bobby, you're a great driver, a champion. I think the commitment by all of us here tonight is to be able to give back. And, I think that's probably the most important thing I've heard tonight is what you give back to other people, and I think that's so important in the world we live in today and what's taking place. We need to be leaders. Bobby Rahal is a leader. He's a friend and I want to congratulate you tonight for the award you well deserve."

Added Jay Frye, president of INDYCAR, "One of the highlights of my job is being around people like Bobby every day."

"I can't thank enough the Argetsinger family for this award," said Rahal. "I've had the privilege to work with J.C. and [son] Duke, the whole family, their mother over the years here. I really thank my old friends on the board of the IMRRC. I think the Center is fortunate to have the caliber of board members that it has.

"And, I want to thank all of you for coming and the nice things you said about me tonight. It's a family honor and [the IMRRC] is also a very good cause."

The evening concluded with the live auction of an original, commissioned painting by motorsports artist Randy Owens depicting Rahal's 1986 Indy 500 victory. A silent auction offered a variety of items from corporate leaders in the motorsports industry and the Finger Lakes Region of New York, and members of the IMRRC's Governing Council.

Two cars were displayed, representing Rahal's career as an IndyCar driver and as a current team owner in the IMSA WeatherTech Sports Car Championship: The No. 05 1989 Lola T8900 Cosworth that Rahal drove on IndyCar road and street circuits, scoring the only win for a Cosworth engine and for Rahal during the 1989 season; and the BMW M8 GTE, introduced in 2018 at the Rolex 24 At Daytona. In 2019, it was driven to victory for BMW Team RLL at the Rolex 24 by Connor De Phillippi, Augusto Farfus, Colton Herta and Philipp Eng, 43 years after its ancestor, the BMW 3.0 CSL, won the Florida classic.

The International Motor Racing Research Center is a 501(c)(3) non-profit organization whose mission is to collect, preserve and share the history of global motorsports. Additional information is available at racingarchives.org.

The Argetsinger Award was established to honor a person in the motorsports industry who is recognized universally for having advanced and improved the sport. The honoree brings prestige to motorsports and demonstrates commitment to the future of racing.