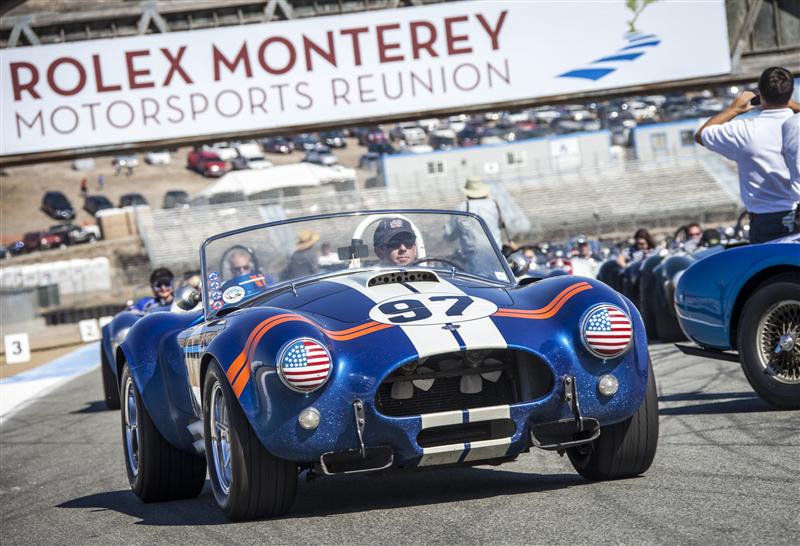 It is said that all things have a beginning, a middle and an end, but that may not be true of the extraordinary Shelby Cobra Daytona Coupe, which is one of the star cars at this year’s Rolex Monterey Motorsports Reunion. There seems to be no end to the excitement and awe that this car, of which only six were built in the early 1960s, brings to all who know its history and have had the opportunity to experience the magic of its design.

At the Rolex Monterey Motorsports Reunion, which today held practice sessions for 17 race groups in preparation for weekend racing, vintage car racing enthusiasts will not only find a legendary Daytona Coupe on display in a museum-like setting but also thrill to the sight and sound of another on track as it chases down 44 other authentic competition Shelby Cobras in a highly anticipated race on Saturday.

Inspiration
According to the Daytona Coupe’s designer Peter Brock, who will be a featured guest at Mazda Raceway Laguna Seca on Saturday, both he and the inspiration for the Shelby Cobra Daytona Coupe were born about the same time.

“During the late 1930s, Germany was working on low-speed aerodynamics; they were far ahead of us on that," said Brock, explaining that in the United States, there was no interest in aerodynamics, since all motor racing was on oval tracks. “The German government set up studios all around their country, and in one of them some automobile prototypes were built with some strange looking forms that were not very well received, so not much was done with them. At the outset of war, all that material was essentially lost or buried. "

Two decades later, however, Brock was working at General Motors for Bill Mitchell, styling what would become the Corvette Stingray Racer, and he found in the GM library an obscure paper written in German.

“As I looked through the pages, there were some funny little scratches, but no photographs or real drawings, so at first I couldn’t understand what I was looking at," said Brock. “But as I looked at the CD (drag coefficient) numbers, they were very impressive. I took the information to Bill Mitchell and said we might try to apply some of this stuff to the Corvette." Mitchell declared the car drawings the ugliest he’d ever seen, and Brock filed the information away until a few years later when he was working at Shelby American. Carroll Shelby had wanted to go to Europe with his Shelby Cobra Roadsters but didn’t feel they had enough horsepower to compete, so Brock resurrected the German plans as the problem’s possible solution.

Shelby gave Brock his shot, but Brock warned him to expect something very different, and after he drew up his ideas, GM’s chief engineer and others were certain they weren’t going to work. “Luckily, Ken Miles, our number one driver, knew something about what was going on in Germany in the late ‘30s, since he had been a club racer in England during that period," said Brock. “He convinced Shelby that we should build a prototype."

Using the chassis from a crashed roadster in the shop, Brock layed his lines, “letting the car design itself." “We built the buck and then built the car around those shapes," he said.

Determination
While the Cobra Coupe was being built, Shelby brought one of his old friends, Denny Howard, a top consultant in the aircraft industry, to see it. “The car was about 85% complete, and Shelby said to me, ‘explain to him how this thing is going to work.’ I felt like a third grader, reciting the alphabet to the teacher, and when I finished, Howard looked at me and said, ‘that will never work; if you’re going to beat the Ferraris, you’re going to need 600 horsepower and you only have 385.’" When Shelby later told Brock “he thinks we’re nuts," Brock responded, “he may be the smartest guy who ever designed airplanes, but I don’t think he knows much about automobile aerodynamics." Shelby just looked at Brock and said, “You’d better be right."

Design
“So we finished the car, and the first time we took it out, Ken Miles broke the lap record at Riverside by 3 Â½ seconds, and we were immediately on pace with the Ferrari speeds," said Brock, adding that the Coupe went on to smoke the Ferraris at Daytona in ’64 (a fire in the pits prevented it from finishing, however), win the 12 Hours of Sebring and set lap records at Le Mans and Spa, but not without some necessary adjustments.

At Spa, after driver Phil Hill reached speeds up to 170 mph in the Daytona Coupe, he complained that if he went any faster he feared crashing, since he couldn’t keep the back end of the car on the ground. “At that point, we put the crudest form of spoiler on the back end, because we had very few tools and no material, just a little sheet of aluminum that wasn’t even big enough to go across the back end." Brock cut the sheet in four parts and screwed them onto the back end of the car. When Hill went back on course, he now had so much down-force at the back end that when he came into corners he was locking his front wheels. “So we trimmed off half an inch of the spoiler, and he went out and broke the lap record. When he came into the pits he said, ‘Don’t touch a thing; it’s perfect!’ That then became our standard spoiler, and from then on the Cobra Daytona Coupe became untouchable. For a $1.98 piece of aluminum, I guess you could say we did pretty well."

Glory
The car that Peter Brock designed for Shelby American astonished the world of motorsports with all it achieved, but for Brock, it was Les 24 Heures du Mans that he remembers as the pinnacle of his own achievement.

“The first time we tested the car at Le Mans, Ford came out with the GT40s on the same weekend, and it was the first time they had ever run. Roy Salvadori, who paired with Shelby in 1959 when they won that race in an Aston Martin, was one of their drivers, and Jo Schlesser was the other. Schlesser went out in the morning, but the car was so aerodynamically unstable that it went upside down, crashed into the trees and was destroyed. When Schlesser came back to the pits, he was pretty discouraged, but when he saw our Cobra Coupe, our chief mechanic was preparing it for our drivers who had not yet arrived. He said, ‘well who’s going to drive this thing? I would like to.’"

The mechanic set up the seat and adjusted the pedals, and when Carroll Shelby arrived, he agreed to let Schlesser drive. Meanwhile, Salvadori went out in the second GT40 and promptly crashed.

“Schlesser got into the Daytona and broke the lap record; he told us that if the track had been dry, he would very likely have broken the Ferrari prototype times as well. That was enough to give us a whole lot of confidence, and for me that was truly the high point of my Cobra Daytona Coupe experience. I had gotten so much resistance in building the car–everybody thought it was a dumb idea, it wouldn’t work, and besides, it was so ugly."

Legend
With Shelby Cobras now celebrating their 50th Anniversary and with the legacy of the Shelby Daytona Coupe as such a sterling example of how perseverance and passion can achieve so much, it is fitting that the Rolex Monterey Motorsports Reunion is celebrating the Shelby Cobra as its special marque this year. “Obviously I am very proud, as any architect or musician would be, or for that matter anyone who does something creative," said Brock.

The Shelby Cobra Daytona Coupe #9 (CSX2286) that will be racing was the last of the six Daytona Coupes built. It raced at Le Mans in 1965 with co-drivers Dan Gurney and Jerry Grant behind the wheel. Grant set the fastest time in class during the race, but the car retired in hour 16 with engine failure.

The Daytona Coupe featured in the Shelby Cobra Heritage Display, was the first Shelby built and the only one made in the USA. After winning its class at the 12 Hours of Sebring, Les 24 Heures du Mans and Spa Francorchamps, it was clear this car was the car to beat in 1964. In 1965, the car went on to win the World Championship of Makes. The current owner of the car, Fred Simeone, is as proud of the car’s history after its official racing career ended as he is of its legendary years racing internationally. “It went to Bonneville where it set 23 sports car land speed records" said Simeone, “including my favorite, which was 150 miles per hour average speed for 12 hours including stops for refueling."