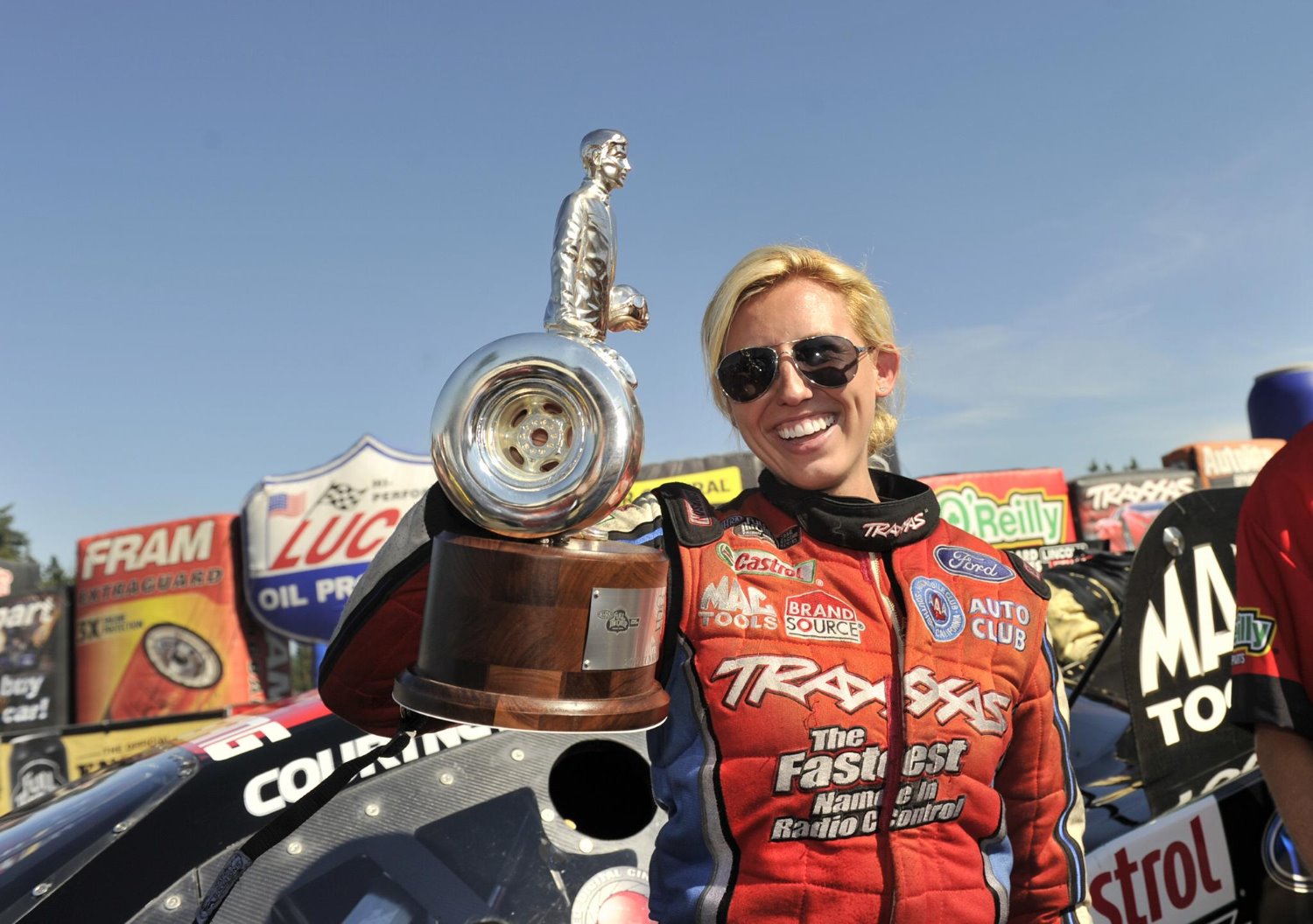 "To have both me and Erica in the winner's circle is awesome," Force said. "We're not just out here to race the boys, we're here to beat the boys and today just proves that."

“This [the women drag racers] is a big family out here, and all of the girls tend to stick together," Enders said. “I couldn’t be more proud of her. She’s an awesome driver and she does a tremendous job out here."

Force, the youngest daughter of 15-time Funny Car world champion John Force and sister of the first woman to win in Funny Car, Ashley Force Hood, earned her first career Funny Car victory at the same track where she earned her first victory in the Lucas Oil series in 2009.

“I remember coming out here and getting my Top Alcohol Dragster win," Force said, “I looked at that Wally and remember thinking how much I couldn’t wait for the day I could get one that said Funny Car on the side. Being that it’s my rookie season, I didn’t expect it to happen this year at all. This is my learning season. I’m doing everything I can to be the best at what I’m trying to do."

Force struggled throughout qualifying, starting from the No. 14 spot but managed to get the tune-up right for Sunday's eliminations as she maintained lane choice in the semifinal and final round in the tough conditions.

Force took out Cruz Pedregon in the opening round, Bob Tasca in the quarterfinals and her father in the semifinals. Then Force’s 4.238-second pass at 293.54 mph in the final round was too much for reigning Funny Car world champ Matt Hagan's 4.328-second pass at 276.58 mph.

The win was a dream come true for the rookie Funny Car driver who has dreamt of competing in Funny Car with her dad since she was a seven-year old girl.

“It was huge," Force said. “Seeing that win light, I really couldn’t believe it. Getting that victory and having to take out my dad in the process was a huge accomplishment. I was listening to my guys on the radio, and I was yelling back at them. As a kid being in a tow truck watching my dad race, I told myself I wanted to be out there racing against my dad."
Enders drove her GK Racing Chevy Cobalt straight to the winner’s circle for the second time in her career in the tough conditions at Pacific Raceways.

“I’m so proud of my guys because they won this race today," Enders said. “They gave me a great car for me to drive, and we drove it right to the winner’s circle. I’m honored to be their driver, and hopefully we can get a few more wins before the season is over. If we can position ourselves well before the Countdown begins, this is a good time to be starting to gain momentum."

With the win, Enders clinched her spot in the Countdown to the Championship, NHRA’s playoffs that start in Charlotte, Sept. 14-16.

Texas native Torrence also had a successful weekend in the Northwest as he earned his first victory at Pacific Raceways. The hot conditions made it tough for the Capco Contractors Top Fuel team but they made the most of their day earning their third win of the season.

“We’ll take them anyway we can get them," Torrence said. “It wasn’t pretty. We definitely had to work for it today, but we got our third win of the season and I’m so proud of my team."

Torrence raced fellow young-gun pilot Shawn Langdon and his Al-Anabi Racing dragster in the final round. The final-round wasn’t a picture perfect pass, but Torrence’s 4.168-second pass at 261.98 mph was enough to take out a tire-smoking Langdon.

“Shawn had me nervous in the final," Torrence said. “He’s a great leaver and a great race car driver. Alan Johnson has had that Al-Anabi car runnin’ all day. I counted on Richard Hogan and had a lot of confidence and did my job. I felt it start to knock the tire off in the final round and went as quick as I could to get it back going. Today, we were just on the right side. We’re living lucky."

Torrence also clinched his spot in the Countdown to the Championship.