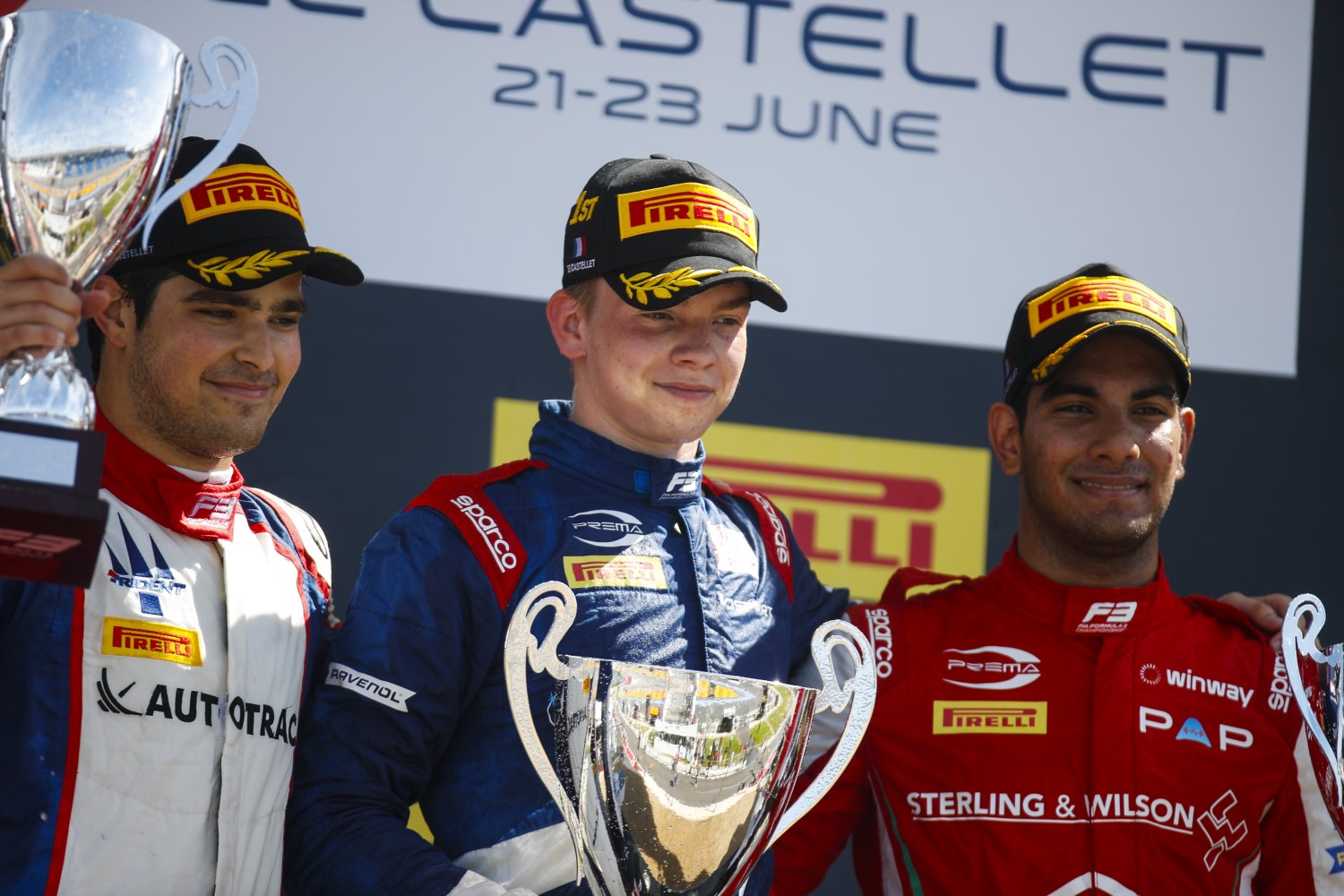 Robert Shwartzman earned PREMA Racing their fourth win of the campaign thanks to a relentless drive from 7th on the grid, in the FIA Formula 3 Race 2 at the Circuit Paul Ricard. The Russian rose to the challenge his race-winning teammate Jehan Daruvala had set on Saturday with a magnificent drive that earned him his second win in four races. Trident’s Pedro Piquet was able to hold off the Indian and break up the PREMA dominance for second, with Daruvala forced to settle for third.

Alex Peroni started on reverse grid pole alongside second placed Yuki Tsunoda and made a clean start off the line, with Marcus Armstrong stalling and plummeting down the grid. Shwartzman’s mission from 7th gathered pace on the third lap when Liam Lawson ran wide and allowed the Russian through.

The PREMA man had Bent Viscaal immediately in his sights and looked over the HWA RACELAB driver’s shoulder, but resisted the urge to overtake. A cleaner chance came a lap later and he followed up a smooth overtake on the Dutchman with a surging tear past Piquet.

Peroni was unable to fashion any form of gap out in front and Tsunoda swept past the Australian with the aid of DRS, which left him in the sights of Shwartzman, who had risen to third in just nine laps.

The trio would then enter into a titanic three-man brawl down the straight. The focused Ferrari academy driver in third eyed an ambitious double overtake for P1 and swung to the right of the pair with a clear pace advantage. In the heat of battle, Peroni wobbled and curtailed off-track through the chicane, but managed to recover and retain his place in the conflict, with Shwartzman edging ahead. Tsunoda countered to marginally regain first, but the Russian had too much and eventually made the jaw-dropping move stick.

The former leader would retreat further and allowed Piquet back into the front three, who quickly closed the gap on Tsunoda and dived around him on the straight. Behind them, Lawson and Armstrong were recovering from their struggles at the start to switch up the top ten and somehow re-enter the higher points’ positions, with fifth and sixth in sight, just behind Richard Verschoor, who had also made a number of mean attacking moves.

Daruvala made a clean pass on the free-falling Tsunoda to enter the podium places and add a third PREMA to the top three. Shwartzman was already out of reach in first, but Piquet’s position was less secure and he eventually handed it over to the Indian, who rattled down the side of him.

With the overtake complete, it appeared as though another PREMA one-two was inevitable, but Piquet had other ideas and opened the door to a further podium reshuffle, when he got within DRS range of the Race 1 winner. With just one lap remaining he drew the maximum from his Trident to reclaim second down the pit straight and swiftly closed for business.

Shwartzman crossed the line in first come the checkered flag ahead of Piquet, Daruvala and Verschoor. Armstrong, Lawson and Jake Hughes all completed incredible assaults up the field to conclude the top 7, ahead of Logan Sargeant, Tsunoda and Felipe Drugovich.

The win hands Shwartzman back the Championship lead with 70 points, ahead of Daruvala by 12 points. Armstrong sits third with 37 points, ahead of JÃ¼ri Vips on 32 and Piquet on 27. PREMA top the teams’ standings with a mammoth haul of 165, ahead of ART Grand Prix by 115. Trident sit third on 41, ahead of Hitech Grand Prix on 32 and MP Motorsport on 16.

Action continues in just a weeks’ time when the FIA Formula 3 Championship heads to Austria and the grid look to break up the early PREMA dominance.

Anthoine Hubert became the first ever Frenchman to win at home in the FIA Formula 2 Championship with a Sprint Race victory at Le Castellet. It is the BWT Arden ace’s second win in three races, topping a podium of three rookies, with Juan Manuel Correa in second and Guanyu Zhou in third.

The Renault junior’s sternest test would come when the lights went out, as Jack Aitken made a searing start off the line and sprinted down the right of four cars, claiming second at the first corner when Jordan King went wide. In front of a sea of French flags, the BWT Arden of Hubert was the only machine to resist Aitken’s charge.

Championship contender Nicholas Latifi enjoyed a similarly strong start, leaping ahead of Correa for third and a potential podium place. His title rival Nyck De Vries had no such luck, dropping two places to ninth and out of the points.

Having claimed the scalps of all but one in front of him, Aitken was determined to complete the set and had Hubert within DRS range once it was enabled. Behind him, Correa reclaimed third from Latifi, before the DAMS driver locked up and lost a further place to the fast improving Zhou. Aitken took a brief look to the right of the Frenchman in front of him, but opted to bide his time – a choice he later came to regret.

Having been so intent on catching the frontrunner, the British driver failed to see the Sauber Junior Team by Charouz car gathering pace behind him. Quickest on track, Correa nabbed P2 from the Campos Racing driver at the north chicane, narrowly avoiding a kiss of tires.

Aitken was further condemned as he watched Zhou thunder past him shortly after, with his team telling him to ‘pick up the pace’ on the radio. Defending fourth from the clutches of Latifi and Sergio Sette Camara would fast become his priority.

Out in front, Hubert was proving imperious, building up a 2s gap over Correa despite the American setting another fastest lap. Further meat was added to the three-way tussle for fourth as Sette Camara pounced on Latifi at the Signes corner. The Canadian attempted to fight back as they exited the turn and briefly reclaimed the position, but his teammate eventually made the move stick.

De Vries’ morning had looked to be improving after moves on Nobuharu Matsushita and Jordan King put him back in the points, but his relief wouldn’t last long. Louis Deletraz, Callum Ilott and Matsushita had all lined up behind him and he was back out of the points by the final lap, having seen all three dovetail past him.

Hubert crossed the finish line to a rapturous home crowd, who roared in support of their countryman’s race win. Correa settled for second, while Zhou completed a trio of rookies on the podium for the first time this campaign. Aitken held on to fourth ahead of Sette Camara, Latifi, Deletraz and Ilott.

De Vries retains his Championship lead with 121 points, but is now just 12 ahead of second placed Latifi. Aitken is third on 85 points, with Sette Camara on 80 and Zhou on 76. In the Teams’ standings, DAMS are first on 179 points, with UNI-Virtuosi Racing on 143. ART Grand Prix are third with 127, ahead of fourth placed Campos Racing on 115, with Carlin fifth on 66.

The rookies will look to follow up a successful race weekend in just a week’s time, when they head to Spielberg, Austria for Round 6 of the season.