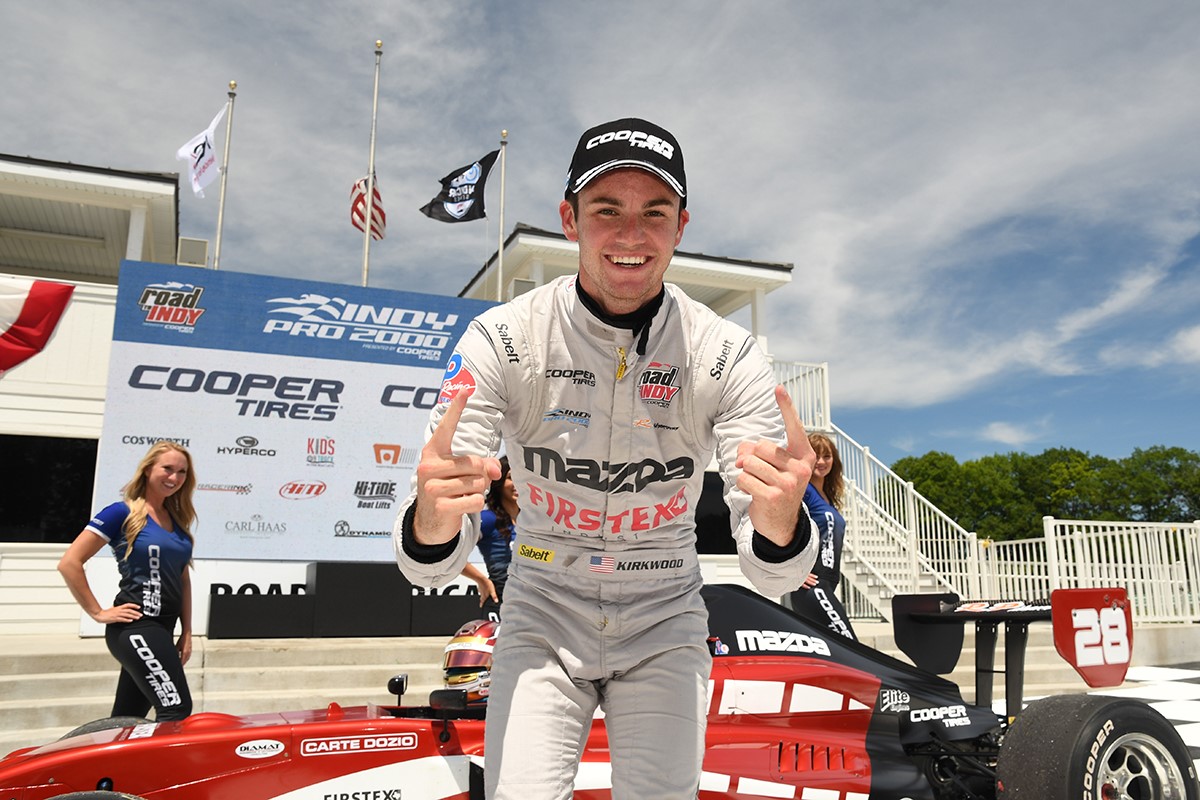 Kyle Kirkwood has raced just three times at Road America during his short career, but the native of Jupiter, Fla., is now three-for-three following an exemplary performance in this afternoon’s Cooper Tires Indy Pro 2000 Grand Prix of Road America Powered by Elite Engines.

The drama began at the first corner when Singapore’s Danial Frost (Exclusive Autosport) ran wide at the exit and thumped the curb heavily enough to cut his car’s electrical system completely. The resulting non-finish represented a stark contrast in emotions following a spectacular maiden victory in the most recent race last month at Lucas Oil Raceway.

The Pace Car was scrambled while Frost’s stricken car was removed from the racing surface, and at the restart Thompson found himself a sitting duck as Kirkwood took advantage of vastly superior straight-line speed to tow past on the start/finish straight and claim the lead comfortably before the braking area for Turn One. Kirkwood immediately romped away in the lead, leaving Thompson to come under increasing pressure from Rodriguez, who had started sixth.

The other big early mover was Mexico’s Moises de la Vara (DEForce Racing), who vaulted from 10th on the grid to fourth on the opening lap ahead of the Juncos Racing pair of Sting Ray Robb, from Payette, Idaho, and championship leader Rasmus Lindh, from Gothenburg, Sweden, who found himself shuffled back from second to sixth in the early stages. Lindh quickly made his way past Robb for fifth, then finally found a way past de la Vara on Lap Five.

Lindh rapidly reduced a deficit of over three seconds to the ongoing battle for second between Thompson and Rodriguez to less than a second, at which point the caution flags waved again following an incident for de la Vara at Turn One.

The ensuing restart once again proved disastrous for Thompson, who was freight-trained by Rodriguez and Lindh before Turn One. The Canadian only just managed to stem the tide before Nikita Lastochkin (Exclusive Autosport) found a way past too.

As Kirkwood romped away once again in the lead to claim a first Indy Pro 2000 win for himself and a first PFC Award for the RP Motorsports USA team, teammate Rodriguez narrowly held onto second as Thompson expertly took advantage of a brief loss of momentum by Lindh on the final lap to reclaim a hard-won third place. Rodriguez’s drive also earned him the Tilton Hard Charger Award after starting the race in sixth.

Round seven will take place tomorrow at 10:05 a.m. CDT, immediately before the NTT IndyCar Series headline event. Rasmus Lindh will start from pole position after posting the fastest time in qualifying this morning.

Kyle Kirkwood (#28 Mazda/Firstex Industries/Bell Helmets/Sabelt-RP Motorsports USA Tatuus PM-18): “This was my most enjoyable win ever, given the amount of work we’ve put in. We’ve been pushing to get this every weekend but have come up just shy so I’m glad to finally get it under our belt. To finally get it done will be a big step forward for us. I knew I could get a run on Parker then draft down the front straight, but I actually didn’t get that good of a jump. I slowed a bit out of Turn 14 but that created such a big run for me that I got clear of him. Once I was in the lead, I knew I had to keep my head down and focus forward. I had plenty of experience out front last year so to do something I was used to really felt good. I hope we can get a streak going – we’re pretty far back in the championship right now but hopefully we can come back."

Ian Rodriguez (#5 epicura/Masterpack Innovative Printing-RP Motorsports USA Tatuus PM-18): “It’s been hard to learn the track – the walls are very close in a couple of places here and I’m not used to the walls being so close. The team did a great job and Kyle has been great, he’s a fast driver and he’s helped me improve. I’m very happy to get a podium in my third race in the series. I don’t have so much time in the car but hopefully I can finish the season and learn more about the car. I have to thank God and my family for helping me so much."

Parker Thompson (#8 Abel Construction/Badlands Motorsports Resort-Abel Motorsports Tatuus PM-18): “Tough race. It seemed as though we were quick through the corners but weren’t as fast down the straight so maybe we didn’t trim out enough. That’s always hard around Road America. The crew gave me a great car and I drove the wheels off it. But the draft here makes it difficult so I couldn’t keep Kyle behind me. On the restart, I thought I was going to get a jump on him coming up the hill on the front straight but I got freight-trained instead. It looked for a while as though we’d be outside the top five but we wiggled our way back into a podium spot. It feels good to get the crew back on the podium, so we’ll put our heads together and go for it tomorrow."