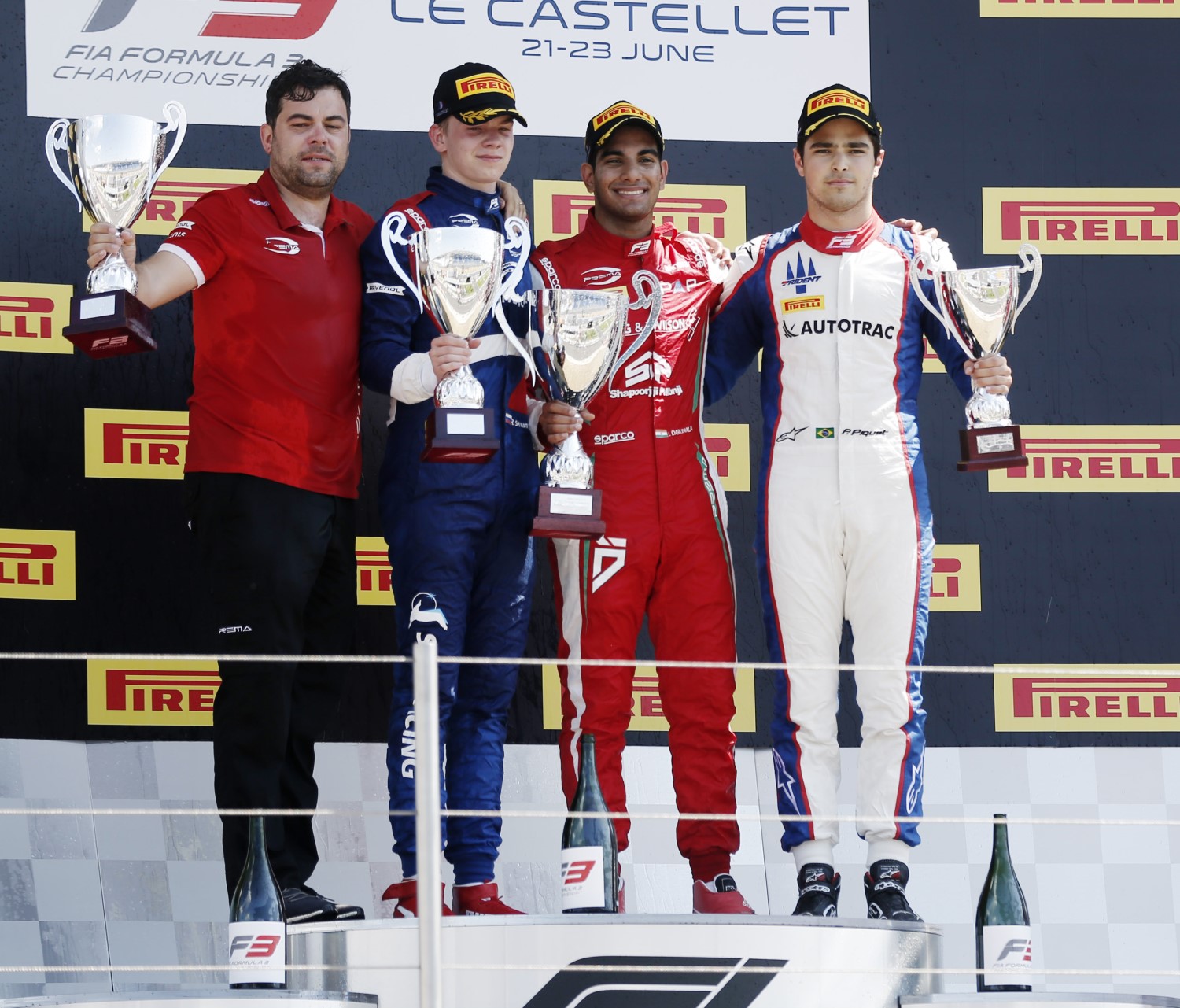 Jehan Daruvala made it back-to-back FIA Formula 3 race wins and three in a row for PREMA Racing, as he came from second to win in Le Castellet, France. There was heartbreak for polesitter Jake Hughes, who lost P1 to the Indian, before making contact with Marcus Armstrong whilst battling for position and dropping to the back of the grid. Robert Shwartzman took advantage of the turmoil to claim P2, with Pedro Piquet completing the podium.

Hughes made the perfect getaway when the lights went out, standing firm in first and setting the fastest lap. Shwartzman suffered contrasting fortunes and dropped back to 6th, behind his PREMA teammates, as well as Piquet and Bent Viscaal.

Daruvala had briefly lost second to Piquet with a slow start of his own, but soon reclaimed the position with a move that seemed to take an age. Armstrong and Shwartzman followed their teammate a lap later down the mistral straight, as the Brazilian’s strong start quickly unraveled. Further back, Juri Vips had been optimistic with an overtake on Alex Peroni and looked to have moved too early, but he earned himself a second shot and made it count for P6.

Daruvala’s slow start became a distant memory and he started piling the pressure onto the experienced Brit in front of him, quickly coming into DRS range. The Indian made his pace advantage count and rattled past Hughes in an all too easy move when the Briton ached around a corner too slowly.

With anger seeping through him, Hughes hurtled back onto the tail of the new race leader, but skidded off track and nearly lost second to Armstrong, who could see his opportunity opening. The Kiwi muscled his way past shortly after, through the tightest of gaps.

As opposed to ending the battle between them, this only proved to intensify it. Hughes kept his emotions in check to shrewdly slide back into second a lap later, with the aid of DRS. Shwartzman added a third name to the bout as he closed in on the Kiwi, before the duo took advantage of an uncharacteristic wobble from the English driver and both surged past after he went wide.

Now out of the podium places, the former poleman suffered a bout of red mist in his fury to recover. Shwartzman overtook Armstrong, and Hughes eyed an all too tight gap around the chicane. He attempted the maneuver, but lost the rear around Turn 8 and clipped the back of the New Zealand driver, sending them both into a spin. Armstrong managed to recover for fifth, but the HWA RACELAB man plummeted to the back of the grid and offered a heart-breaking apology to his team.

With bedlam playing out behind him, Daruvala built up a steady 3s lead out in front and seemed assured of the race win heading towards the final lap. Now up to third, a three-way tussle between Shwartzman, Piquet and Vips commenced with little time left. The gap between them was microscopic, but with just a lap to go, there was little time to be gained and the trio retained their positions come the checkered flag.

Daruvala was first through to secure his second win of the campaign, while Shwartzman followed for a PREMA one-two, with Piquet in third. Vips , Bent Viscaal, Armstrong, Yuki Tsunoda, Peroni, Liam Lawson and David Beckmann followed.

Campos Racing’s Peroni will start Race 2 in reverse grid pole tomorrow as the F3 grid turn up in the heat in France, at 9.55am local time.