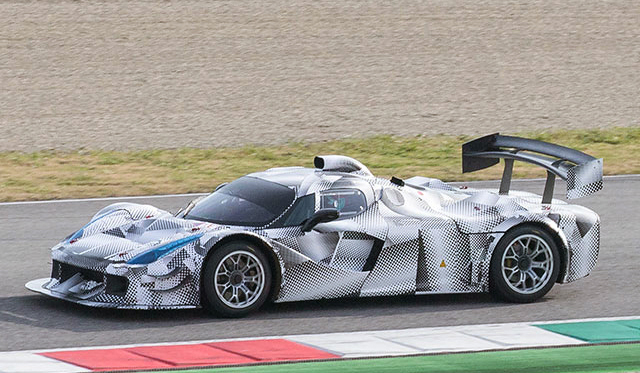 UPDATE (GMM) Ferrari could be set to announce a Le Mans prototype foray.

It is already known that the Maranello marque's lead formula one driver, Fernando Alonso, will be the special guest starter of the fabled 24 hour endurance race this weekend.

Ferrari announced last month that the Spaniard was invited to wave the flag at Le Mans following "several comments president (Luca di) Montezemolo has made relating to the technology and car development linked to this event".

"It (Le Mans) is one of a handful of races that has defined the history of motor sport," Alonso was quoted as saying.

Ferrari quoted Alonso as saying last month ahead of his Le Mans visit: "I'm keen to check out the details on this type of car.

"In formula one, we have also entered the hybrid era and I am curious to find out more about the working methods and technology involved in this series."

Spain's El Mundo Deportivo is now reporting speculation that Ferrari could announce its return to Le Mans with a 'LMP1' prototype car foray on Saturday.

Correspondent Raymond Blancafort said organizers of the famous 24 hour race are already flagging a "very important announcement" to be made before the 2014 race start on that day.

At the end of November, a mysterious LaFerrari prototype was spotted testing at Fiorano. At the time, it was believed to be testing next year’s six-cylinder turbocharged engine set to be used in the 2014 Scuderia Ferrari Formula One car.

However, now new images of that same prototype have emerged and they indicate that this isn’t in fact a simple LaFerrari prototype with a different engine. As a matter of fact, this appears to be a Ferrari LMP1 prototype! This would follow on from Luca di Montezemolo recently stating that Ferrari was interested in returning to the Le Mans 24 Hours to compete in the highest category.

And there’s no mistaking the fact that this looks just like you’d imagine a Ferrari LMP1 car to look. Differentiating this prototype from the previous one is the massive carbon fiber rear wing which is a staple among the competitors in the LMP1 class.

On first glance, it appears as though this prototype could have borrowed some body panels from the LaFerrari with a host of new aerodynamic improvements including a much more prominent front splitter, dual canards and centre-locking racing wheels. Additionally, it features a large roof scoop obviously feeding the potent engine. GTSpirit.com