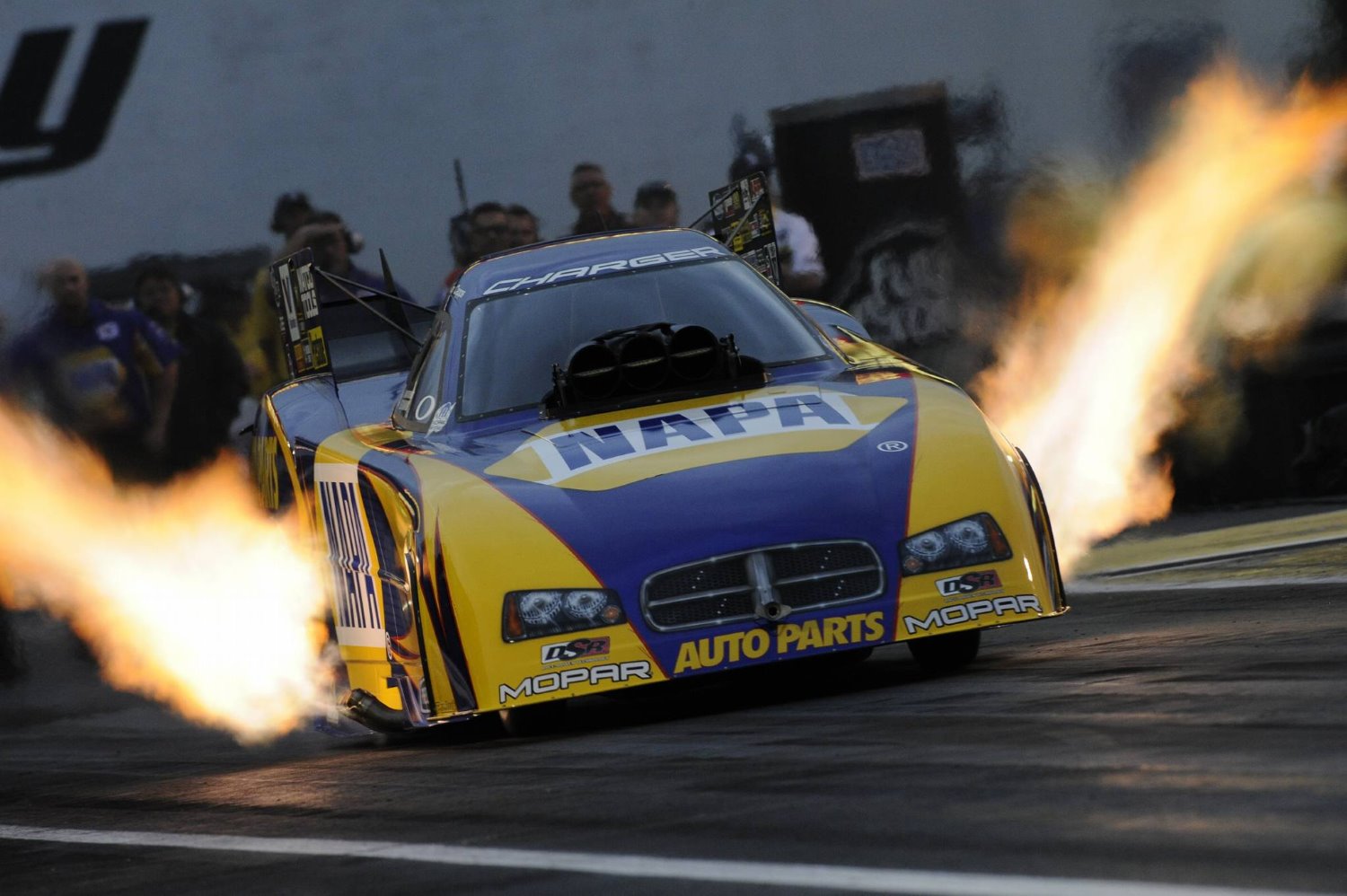 After posting the quickest Funny Car run in NHRA history to claim his first No. 1 qualifying position of the season, Ron Capps will now try to extend his streak of final round appearances to five at the Toyota NHRA SuperNationals.

Capps, who has raced to four consecutive finals and one victory since new crew chief Rahn Tobler took over tuning duties for his NAPA Auto Parts Dodge Charger in early April, claimed his 12th career No. 1 qualifying position with the historic performance of 3.964 seconds at 320.89 mph during Friday evening’s qualifying session.

“Every autograph today the fans wanted 3.96 written next to my name, and it’s just pretty neat," Capps said. “It’s starting to sink in. This track has been around forever. It’s neat to give this track what we did last night with Top Fuel and Funny Car because it’s a legendary track on our circuit."

Capps will open eliminations at historic Old Bridge Township Raceway Park against journeyman racer Bob Bode, the 16th qualifier. During his impressive final round streak, which included a victory at Atlanta, Capps moved from eighth to second in the points standings. Capps needs to clock a time of 4.004 seconds or quicker in eliminations to certify his historic time as an NHRA national record, which carries a 20-point bonus.

The quickest Funny Car runs on Saturday were turned in during the final session and posted by Johnny Gray with a 4.045, followed by Capps with a 4.064 and Robert Hight with a 4.066. Tony Pedregon was quickest in the third session with a 4.106.

In Top Fuel, Massey also claimed his first No. 1 qualifying position of the season with a category-quickest performance on Friday. He blasted his FRAM/Prestone dragster down the track in 3.728 at 329.14 to claim his fourth career No. 1 effort. Massey, who has won three times this season in four finals and leads the series standings, will face T.J. Zizzo in the opening round. Massey needs a 3.765 or quicker to turn his 3.728 into an NHRA national record.

“We were pushing for [the record back-up] the last session," Massey said. “We knew it was going to be such borderline with the cloud cover and then the sun going back and forth, and then halfway through that session, the sun came back out, and we knew it was going to be a close shot at it. It was just that much too much, and it got out there and spun the tires. It’s OK. We didn’t get it. We want to go into race day now and put our race-day tune-up back in the car and just focus on going rounds. I want to focus on winning first round, not focusing on getting the record. It’s one round at a time, and hey, if we get to the final round and the conditions some back to the situation where we have a shot at it, I guarantee you we will be pushing for it in the final, not in first or second round."

Doug Kalitta, who qualified eighth and will face Antron Brown in the opening round, had the most consistently quick dragster on Saturday, posting times of 3.838 and 3.794 and earned qualifying bonus points in both sessions. Seven-time world champ Tony Schumacher, who is looking to end a 32-race drought from the winner's circle, was the quickest on Saturday in the U.S. Army dragster with a 3.778, followed by recent first-time winner Steve Torrence, who posted a 3.785.

In Pro Stock, Line raced to his fifth No. 1 of the season and 29th of his career with his Friday run of 6.518 at 212.76 in his Summit Racing Pontiac GXP. He will face Ford Mustang driver Grace Howell in the opening round. She is only the sixth female to compete in Pro Stock in NHRA history.

In Pro Stock Motorcycle, local favorite Krawiec earned his second No. 1 of the season and 11th of his career with a track record performance of 6.782 at 197.48 on his Screamin’ Eagle Vance & Hines Harley-Davidson. The Englishtown native and former Raceway Park general manager will face 70-year-old Suzuki rider Joe DeSantis in the opening round of eliminations. It is Krawiec’s second-consecutive No. 1 at this event.