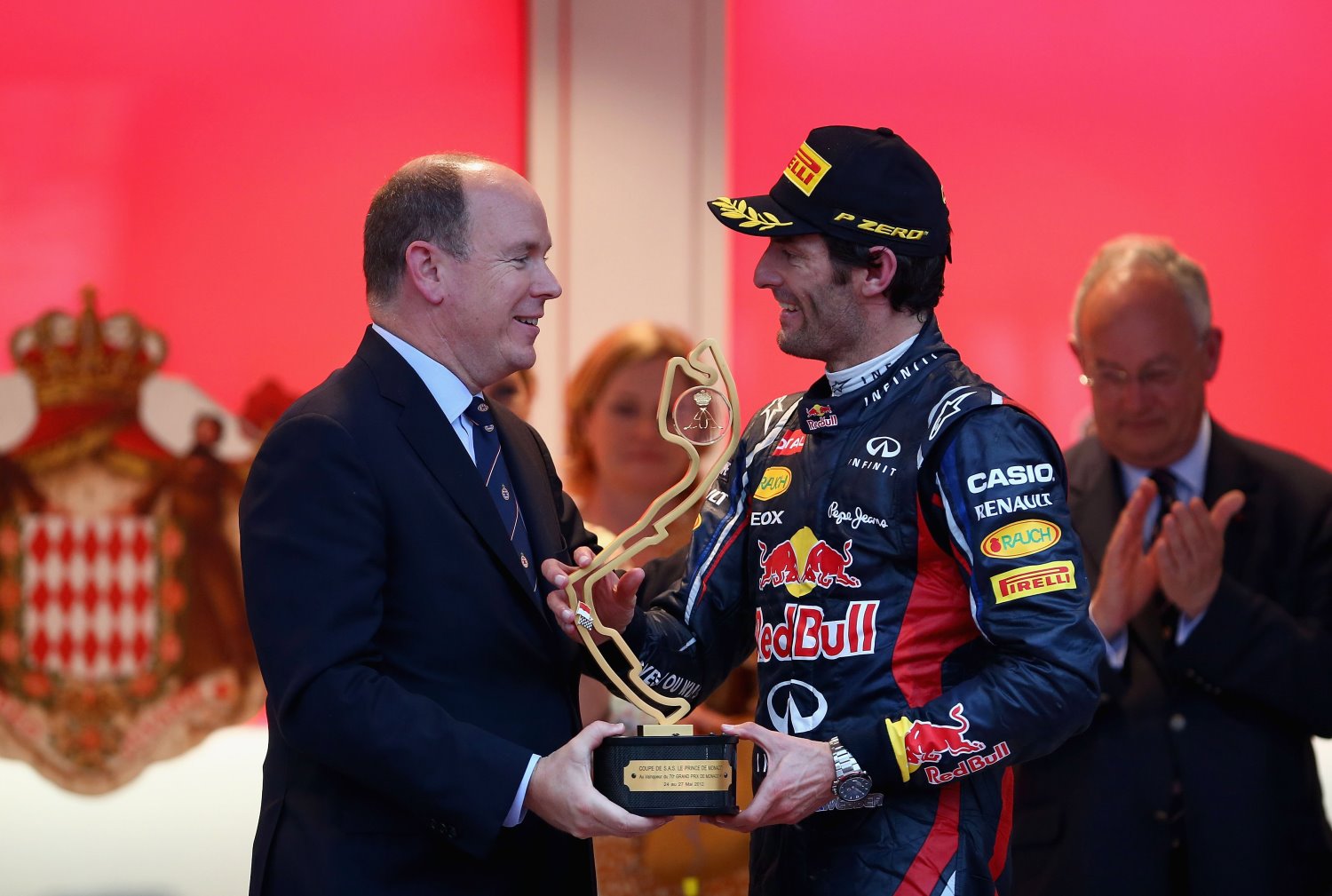 Red Bull driver Mark Webber won the most prestigious F1 race of the year winning the Monaco Grand Prix ahead of a train of cars led by Nico Rosberg's Mercedes (0.6 sec back), Fernando Alonso's Ferrari (0.9 sec back), Sebastian Vettel (1.3 sec back) in the 2nd Red Bull and Lewis Hamilton for McLaren.

As light rain fell with only a handful of laps remaining the front of the field closed up together – the top six runners separated by 6.1 seconds at the flag.

Webber led from pole and only relinquished the lead during pit stops, his second win on the streets of this beautiful Mediterranean principality. He was the sixth different winner this year in six races, a new F1 record.

Alonso now takes sole possession of the title points race after another podium, heading a tie between Vettel and Webber by just three points. Hamilton is 10 points behind now.

"Mark was very disciplined," said his boss Christian Horner on British BBC television. "He did what he needed to do."

"This is a golden era for formula one," said former driver and commentator David Coulthard.

F1's latest 2012 winner, however, does not fully agree, Webber insisting that for the actual drivers and teams, the inconsistency of the season so far has often been "frustrating".

"Hopefully we can get a bit of routine now," he said.

As for the protest threat hanging over the provisional race result, Red Bull designer Adrian Newey – who collected the trophy from Prince Albert – insisted the floor of his RB8 is legal.

"We have a letter from Charlie Whiting saying categorically that it's legal so we're not worried," he said.

Horner said on Sky television he would be "disappointed" if Red Bull's rivals do lodge a protest.

Nico Rosberg confessed himself happy with second place at the Monaco Grand Prix despite insisting that his Mercedes car was the quickest in the entire field over the weekend.

Rosberg was swarming all over the back of Mark Webber's Red Bull in the closing laps but could not find a way past around the tight confines of the Principality circuit.

"The beginning was pretty straightforward," said Rosberg. "I was hoping for a good start and I had a good start but Mark had a pretty go start too so then it was just a matter of tire management and I must say I was a bit surprised how strong we were not only in qualifying but also in the race."

"I think at the end of the day for the weekend we probably had the fastest car out there in qualifying and the race which is great to see because we're making progress all the time so that's fantastic. Unfortunately it didn't come together perfectly so it's P2 when it could have been P1 this weekend but there we are. I'm very happy with second place of course, it got a bit difficult in the end there with the rain and the warm up on the hard tires but I'm very pleased."

Sebastian Vettel says he can be "quite happy" with the way his recovery drive in the Monaco Grand Prix panned out after he came from ninth on the grid to finish right in the middle of the battle for victory in fourth.

Having struggled for pace in his RB8 in the early stages of qualifying on Saturday, Vettel opted to sit out Q3 in order to give him a free tire choice for the first stint of the race and on Sunday duly opted to go against the grain compared with the cars ahead and start on the more durable soft tire.

The German managed to pick his way past the spinning Romain Grosjean into the first corner and, after ending the first lap already in sixth place, completed a 45-lap stint first stint which saw him move into the lead after the runners ahead of him pitted.

"As I said, I think we was pushing his race, I was pushing my race. For me it was important to use the couple of laps I was in the lead and in the end we were able to gain about eight seconds so I can be quite happy with that.

"But obviously in the end it was difficult to pass and gain some more places."

With all the top runners completing just a single pit stop over the 79-lap distance, Vettel admitted tire management was a big consideration but was pleased with how he was able to run until he hit the traffic jam at the end.

"It was a challenge," he said.

"Especially in my case I stayed out quite long in the first stint – longer than the all the rest – but we had some good laps. So it wasn't disastrous and in the end obviously you can't judge because we couldn't go at the speed that was maybe in the car."